At a policy forum Wednesday at the Johns Hopkins Bloomberg School of Public Health, Kathryn Farinholt made things personal, breaking for a long pause as she described the sister she knew 45 years ago. Before schizophrenia.

Farinholt, now executive director of the National Alliance on Mental Illness Maryland, recalled an adventurous, funny, athletic 13-year-old who was suddenly transformed by "grotesque nightmares, paranoid delusions, and stray thoughts out of nowhere."

She also recalled a system incapable of handling her sister and the cumulative traumas her illness created. Her parents depleted their savings on treatment and care; her sister escaped from a private hospital and ended up stranded in California; and no one in the family received "more than a minimal education" on what paranoid schizophrenia meant.

Farinholt—one of several experts who convened at the School of Public Health in East Baltimore for the Centennial Policy Scholar Seminar on mental health and addiction policy—spoke of the improvements over the past several decades in American practices and attitudes toward mental health.

Other experts focused on areas that still need change. Henry "Hank" Steadman, a policy adviser who formerly ran a research bureau for the New York State Office of Mental Health, pointed to the country's jails as a natural point of interception for treatment and for enrollment into insurance plans under the Affordable Care Act. About 2 million people enter jails per year with "current, active symptoms of serious mental illness," he said.

The panel, which featured former U.S. congressman Henry Waxman—now the Centennial Policy Scholar at the Bloomberg School—was part of a full day of forums at the school focused on mental health and addiction issues.

The day was also a test run for the new Center for Mental Health and Addiction Policy Research at the Bloomberg School, which helped organize the events.

"This is the kind of work we want to do—translating research into policy and practice," says Colleen Barry, who directs the new center along with Elizabeth Stuart.

The center, which launched officially earlier this week, aims to serve as an umbrella organization, linking Hopkins faculty members in different departments who are researching mental health and addiction issues, says Barry. "One thing about Hopkins is it's a large place," she says, indicating that sometimes research, although interconnected, can be "conducted in silos."

Another goal, Barry says, is to create opportunities for students "to connect with the real world in policy." To that end, the center is currently working to develop training programs and possibly academic courses, along with forums like the ones this week.

On Wednesday, the center brought together about 75 experts, researchers, and government officials at the Bloomberg School to discuss policy issues throughout the day. A morning session discussed health insurance parity, while an afternoon panel focused on reducing stigmas toward mental illness and addiction.

Those topics also came into play at the midday Centennial Scholar Seminar. Waxman spoke of a national health insurance model that has not yet "fully achieved" parity for mental health and addiction, but he pointed to the Affordable Care Act and other policies as "an opportunity for the whole healthcare system to become far more integrated."

The panel also featured Richard Frank, an assistant secretary at the U.S. Department of Health and Human Services, and Steven Sharfstein, president and CEO of the Sheppard Pratt Health System in Baltimore.

The discussion was the third in a monthly series Waxman is hosting throughout the Bloomberg School's centennial year, bringing together experts to explore pressing public health topics. Future panels this semester will discuss HIV/AIDS and tobacco control. 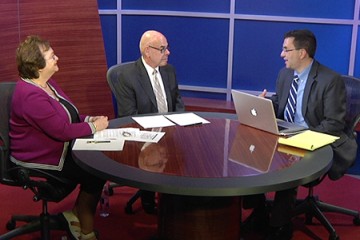 Reflections on successes, failures of Medicare