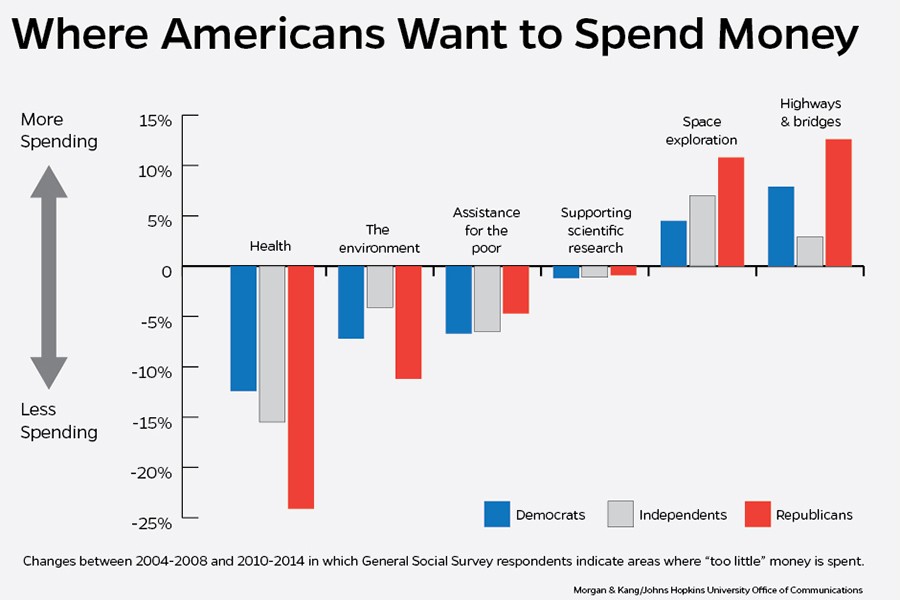 The Affordable Care Act has eroded support for federal health care spending among not just Republicans but also among Democrats and independents, a Johns Hopkins University study has found.

Before the 2010 passage of the law widely known as Obamacare, up to 86 percent of Democrats thought too little was being spent on health. At the same time, about two-thirds of all independents and Republicans also supported increased health care spending.

But after the law was enacted, Republican support for more federal health care spending dropped 25 percent, while support among Democrats dropped about 12 percent, and support from independents dropped by as much as 15 percent.

"One would expect strongly partisan responses to the passage of Obamacare," Johns Hopkins sociologist Stephen L. Morgan said. "But the decline in support is from everyone. Our conclusion is that a conservative 'cold front' may have arrived in 2010, fueled by the passage of the [Affordable Care Act]."

Working with graduate student Minhyoung Kang, Morgan, the university's Bloomberg Distinguished Professor of Sociology and Education, analyzed data from the 2004 to 2014 General Social Surveys. They focused on responses—before and after the passage of the Affordable Care Act—from survey respondents who indicated that "too little" is spent on the nation's health. The findings are published by the online journal Sociological Science.

Morgan even found a 5-point decline in the percentage of Democrats who feel that the federal government should help individuals pay doctor and hospital bills. The decline was much larger for Republicans and independents.

"Our interpretation is that attitudes toward spending on health are distinctly negative," Morgan said. "It's a disproportionately large drop for health care."