'Following the Ninth' director finds the power, wonder in Beethoven's most famous work 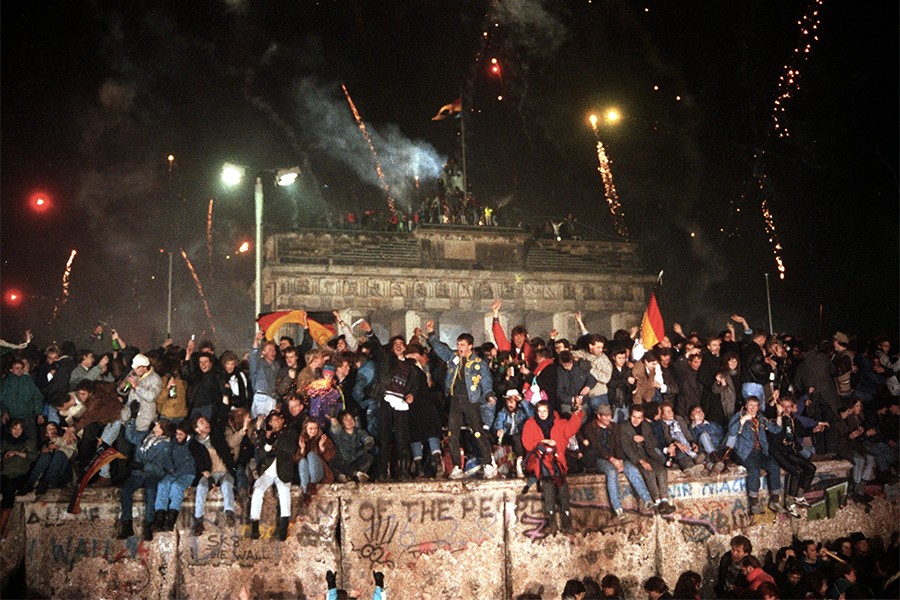 Image caption: Leonard Bernstein led a performance of Beethoven's Symphony No. 9 in Berlin when the wall dividing the German capital came down in 1989.

A chance encounter with Ludwig van Beethoven's Symphony No. 9 in a borrowed car sent Kerry Candaele on a journey that eventually led to Following the Ninth, his documentary about the many ways Beethoven's indelible piece of music has inspired, and been a part of, protests and social movements around the world. 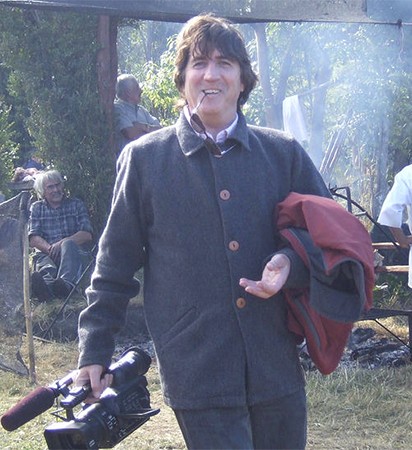 Chinese students played it in Tiananmen Square in 1989. Leonard Bernstein led a performance of it in Berlin when the wall came down that same year. Chilean women sang it outside the prisons where people were tortured during the dictatorship of Augusto Pinochet.

Candaele—a writer, filmmaker, and producer (he co-produced Robert Greenwald's excellent Iraq for Sale: The War Profiteers and Wal-Mart: The High Cost of Low Price)—comes to the Peabody Institute of The Johns Hopkins University on Friday for a screening of the film followed by a Q&A session. The event is open to members of the university community and students from the nearby Baltimore School for the Arts.

The Hub spoke with Candaele by phone to talk about the Ninth, its universal appeal, and our human connection with music.

I read in your notes on the film's website that your relationship with the Ninth started from a human place, not a filmmaking place, and I wanted to ask how you made that movement from the human to the filmmaker. How did you become aware of the broad range of the Ninth's appeal and start putting together these stories about it being played at Tiananmen Square or in Chile under Pinochet?

I first heard the [Ninth] by accident because I borrowed a friend's car, pushing in a cassette and hearing this glorious music come out of the sound system. I just fell in love with this piece, and it touched me at such a deep level that I had to discover more of Beethoven's works and read about the man. I was studying history at the time, so it was a nice way to get into the world of history via one of the greatest composers, who happened to live in such a critical moment in world history—during the French Revolution and the post-revolutionary period.

So as I got fascinated by this man and his music, I kept reading and studying and listening. And eventually "the Google" came along, as John McCain calls it, and I started getting "Beethoven's Ninth" and "Beethoven" alerts sent to me. So the technology helped, and I started to see these stories—Tiananmen Square, Pinochet's Chile. I'd read these articles and think, This is fascinating—how did this music travel? Billy Bragg had done a version in English, not translated it but rewrote it, which some people think is kind of a sacrilege but I thought he did a great job. And in Japan, the Daiku was so interesting—10,000 people singing in a chorus. I just thought covering these stories and following Beethoven would make a great film, and I made that silly mistake of jumping in and seeing if the net appeared. I let the music lead me. That's not a bad idea to do with Beethoven because he leads you to such fascinating places—not only internally as a soul-searcher, as a guy who plumbed the depths of his own soul and seemed to touch on ours in a universal way, but also externally in these social movements as a sort of musician-citizen.

I saw in your TEDx talk that just working on the film took you to 14 countries over six years. How did you go about locating the people who had these stories to tell? Because that's a long way to go if you're jumping and looking for a net.

Yes—you do have to make these connections in advance because you can't just go out, wander around, and hope to run into somebody who has a great Beethoven story. So you have to do your pre-production research. I found some people who were very interesting in Chile. Isabel [Lipthay], who is in the film, led me to others. She's Chilean but had to leave during the Pinochet regime and ended up in Münster, Germany. She crossed over into both worlds, keeping both of them in hand and in heart, so she led me to the gentleman, Machi [Renato Alvarado Vidal], who's in the film, who was tortured and heard this music sung to him and others over the walls of the torture prison in Chile.

In the case of the German story, it was very interesting because it was the last story I did and I couldn't afford to travel at that time, so I posted through Craigslist asking for anyone who had been in East Berlin during the fall of the wall to get in touch with me for this film. A bunch of people got in touch, I interviewed several people over the phone, and then chose the woman whose story I thought was very good, Lene [Ford], who is in the film from East Germany.

What did working on this project bring to your understanding of the Ninth? I ask because you mentioned first just liking the Ninth and being drawn to it on a human level, and you got to talk to others who had their own connection to it through their lives. Did that process teach you about what that connection is to music, or to the Ninth in particular?

I think that all music has the capacity to transform us, whatever genre. It certainly did with my life. I grew up with rock 'n' roll music, and it profoundly changed my life. It also connected with the events of the time, as music often does. In the case of rock 'n' roll during the late '60s, early '70s, it was sort of a samizdat, the Soviet dissident's version of an underground newspaper. It was commenting on the war, it was commenting on civil rights, and it's sort of an organic part of them.

But in the case of Beethoven's Ninth Symphony, it's had a more troubled journey, I think. It was appropriated by the Nazis, by Hitler. He had it performed on his birthday. He insisted that it was an Aryan piece against, really, all the evidence of Beethoven's intentions. Beethoven didn't call it an Aryan piece. Beethoven didn't say this was the Ninth Symphony for Germans. He called it a kiss for all the world. It uses Friedrich Schiller's words, and that's in there. It doesn't say all German men or all Aryan men or all white men. He said this is all men, all men will be brothers, not a specific race or group. That, of course, has an international appeal, it crosses boundaries very easily, it connects with people over barriers of culture, of language, of history. So it's no surprise that it has turned into this international and eternal piece. I certainly believe it will be around as long as human beings are around to listen to it.

You said that first hearing the Ninth, you wanted to learn more about Beethoven and his work in a historical context, and it's obvious you've done a great deal of research. You know the piece and Beethoven fairly intimately now. Is this the culmination of a journey of being a fan, or did you find yourself doing more directed research to be able to talk about, write about, and make a film about this piece and to be able to convey everything you wanted to about it to a film audience that maybe doesn't know all those things?

I'm a historian by training, so I was very much interested in not just the biographies of Beethoven, but also the scholarly work around the Ninth and different interpretations. That's what historians do first when they try to grapple with a problem, read around the question. I did want to prepare myself for the eventual taking of this film into the world, because I don't come from a classical music background and I don't read music. And I anticipated some sense of, Well, who are you to say anything about him?

So I did want to be prepared. I cannot tell you what a double fugue is to this day, but I can say many other things about Beethoven and the Ninth Symphony that maybe others can't. But I think I can have a fair and intelligent discussion even with most scholars of Beethoven, some of whom are very specialized and some are not. Let's put it this way—I think I can anticipate almost any question these days except for when it comes to the double fugue and what it's doing in there, how it's shaping this music. But maybe I'll get there one day.

I ask because in one of the interviews with you I saw online, you make a point that I think people who are in classical music sometimes overlook, which is that you don't have to be able to read music to be moved by music. And from what I've seen and read of the film, it's very much about that human connection to music—which is, on one level very obvious, but it's something that we don't always discuss in a more thoughtful manner. And I wanted to know how or if making this movie changed your relationship or understanding of the Ninth, because over time our relationship to pieces of music evolve and mature the way we do. Music is just such an evocative trigger for memory and the times of lives and the different people we were during those times. So what has the process of working on this extended project done for your own relationship to the Ninth itself?

Somebody said, I don't know who it was, but: Music isn't just given, it's taken. And we take it through our own experience and memories and very personal experiences in life. So the Ninth's third movement was very moving to me, and I heard it in a way that most scholars do not. I've read a lot of interpretations of it, but I heard it as a melancholy piece, and that's just given my own personality. And the only other person I saw write about it in that way, and I was very pleased to find this person, was an early German critic. He said the third movement was "heavenly melancholy," and that's the way I heard it.

So what the piece taught me, listening to it over and over, is that musicians—if they've forgotten—[should] remember or get back to the place where the music is awe-inspiring, where it's so surprising and transformative. Because a lot of people get brought up playing music at a very young age and they forget to really listen to the piece and allow it to change them. They're taught to be very professional. They're taught to be connoisseurs. They're taught to be very practiced and precise at playing, of course. But there's a point at which one has to, I think, step back and say, How does this music continue to move me? How do I find wonder in it still?

The Peabody Institute of The Johns Hopkins University will host a screening of "Following the Ninth" on Friday, Sept. 4, at 2:30 p.m. in the Miriam A. Friedberg Concert Hall, followed by a Q&A with director Kerry Candaele. The event is open to faculty, staff, and students of Johns Hopkins, and invited guests.