Computer-generated schedules can replace those done by hand

With the help of some Johns Hopkins University math students, minor league baseball is catching up with the majors in using computers to produce its game schedules.

The students and their professors used complicated mathematical formulas to coax computers into churning out workable schedules for several minor leagues—a marked improvement over the tedious and more time-consuming method of developing schedules by hand. On Friday, the New York-Penn League will open its 76-game short season with a schedule produced not by hand but by students in a JHU computer programming class under two faculty members' direction.

The South Atlantic League has also approved a 140-game schedule for 2016 made by the Johns Hopkins group, and further scheduling agreements for next year are pending with other minor leagues. There have even been discussions with the scouting department of the Baltimore Ravens.

"This is brand new, this is trailblazing," said Eric Krupa, president of the South Atlantic League. He added that his 14-team league at the minors' Class-A level has always had its schedule made by hand. "I am very much excited, intrigued by this whole process."

"They're visibly interested and excited. … The educational value is immense," said Fishkind. It's one thing to learn the mathematical concepts involved in programming, he said, but "a lot of times it doesn't have meaning until you apply it."

The students worked under Fishkind and Anton Dahbura, executive director of the Johns Hopkins University Information Security Institute. The arrangements with the minor leagues took shape over the past two years in discussions between league officials and Dahbura, a Hopkins alumnus, former college baseball player, and part-owner of the Hagerstown Suns, the South Atlantic League affiliate of the Washington Nationals.

Scheduling is a daunting balancing act of team requirements and special requests. Each team wants the best schedule of limited travel, homestands and road trips not too long or too short, well-placed rest days, home games on weekends, and away games when their ballpark is booked for concerts or other events.

Major League Baseball has been using computers to produce their schedules for years, but minor-league schedules have been done by hand.

"It's a matter of keeping all the teams equally happy, or you might say, equally unhappy," said Dahbura, an associate resident scientist in the Whiting School's Department of Computer Science. "It's kind of like being an umpire."

In numerical terms, given the needs and wants of the 14 teams in the South Atlantic League, that 140-game schedule adds up to 36,753 desired outcomes that the computer has to figure out by accounting for 46,457 variables.

The good news is that once all the information is fed into the computer, changes can be made relatively quickly, Dahbura said. Revisions that might take weeks by hand can be done electronically in a few days.

In the end, the students' work was compared with the hand-made version and came out ahead, said Rick Murphy, chairman of the New York-Penn League scheduling committee, which considered eight key criteria, including numbers of consecutive games without a break, total days off, and balance of Friday and Saturday home games.

"The committee felt as though the Johns Hopkins proposed schedule did a better job of addressing the criteria," said Murphy, vice president and general manager of the Tri-City Valley Cats in upstate New York, one of the league's 14 teams.

The South Atlantic League also compared the computer and the hand-made schedule, and went with Hopkins, Krupa said.

The Southern League and the Carolina League are now reviewing proposed 2016 schedules that the students created. The Florida State League has provided information that could be used to make a 2016 schedule, and the International League is asking for revisions to a proposed 2017 schedule, Dahbura said.

The students also have created schedules for the umpires for the New York-Penn League 2015 season and will do the same for the South Atlantic League for 2016.

Now the NFL is knocking on the door. The Baltimore Ravens have asked the group to fine-tune the travel schedule for the team's three scouts who have to cover a couple of hundred colleges across the country between August and November, Dahbura said.

That's in the early stages, but the success up to now has been satisfying, said Marni Wasserman, who worked on the project as a junior and senior in Fishkind's class.

"It was really exciting because we had worked really hard," said Wasserman, who graduated in May from the Whiting School of Engineering with a degree in Applied Mathematics and Statistics. "It was exciting that our hard work had paid off." 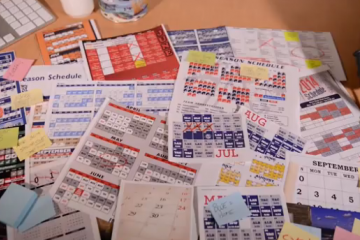 Taking a swing at scheduling