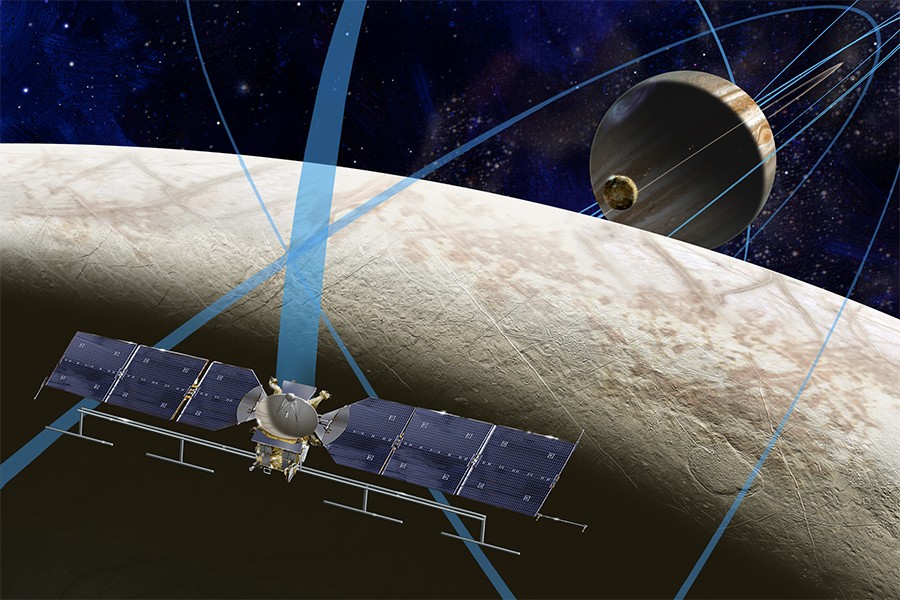 Two instruments designed by the Johns Hopkins University Applied Physics Laboratory are among nine instruments selected for flight aboard a proposed NASA mission to explore Jupiter's moon Europa and investigate its habitability.

An earlier NASA mission, Galileo, produced strong evidence that the moon—about half the size of Earth's moon—has an icy shell that overlies a saltwater ocean. If proven to exist, this global ocean could have more than twice as much water as Earth. With abundant salt water, a rocky sea floor, and the energy and chemistry provided by tidal heating, Europa could be the best place in the solar system to look for present day life beyond our home planet.

"Europa has tantalized us with its enigmatic icy surface and evidence of a vast ocean," said John Grunsfeld, associate administrator for NASA's Science Mission Directorate in Washington. "We're excited about the potential of this new mission and these instruments to unravel the mysteries of Europa in our quest to find evidence of life beyond Earth."

Last year, NASA invited researchers to submit proposals for instruments to study Europa. Thirty-three were reviewed and, of those, nine were selected for a mission that will launch in the 2020s.

APL's Plasma Instrument for Magnetic Sounding, or PIMS, will measure the plasma surrounding Europa in order to characterize the magnetic fields generated by plasma currents, enabling precise determinations of the thickness of the moon's ice shell as well as the depth and salinity of the ocean below.

"PIMS will help to unlock the secrets of Europa's icy shell and hidden sea," said APL's Joseph Westlake, principal investigator for PIMS. "By measuring the plasma currents around Europa, along with the magnetic field measurements ... we will learn a great deal about Europa's ice shell and subsurface ocean."

APL will also provide the Europa Imaging System, or EIS, a high-resolution, dual-camera instrument that will provide near-global coverage at 48-yard resolution, topographic and color maps, and imaging of targeted sites at roughly one-yard resolution.

"EIS will transform our understanding of this fascinating moon by revealing its surface in unprecedented detail and giving us new insights into its ice shell," said Elizabeth Turtle of APL, principal investigator for EIS. "The EIS team has specifically designed this instrument to be able to take very high-resolution images of Europa's surface during fast flybys in Jupiter's high-radiation environment."

In addition to providing the PIMS and EIS instruments, APL will also provide science leadership for two other instruments selected for the mission. The laboratory will develop the scanning mirror and the instrument electronics for the Mapping Imaging Spectrometer for Europa (MISE) instrument, led by Diana Blaney of NASA's Jet Propulsion Laboratory, with APL's Charles (Karl) Hibbitts as deputy principal investigator. Wes Patterson of APL will serve as associate deputy principal investigator on Radar for Europa Assessment and Sounding: Ocean to Near-surface (REASON), a radar instrument that will examine and take sounding measurements of the icy crust of Europa. That instrument's principal investigator is Donald Blankenship of the University of Texas, Austin.

NASA's fiscal year 2016 budget request includes $30 million to formulate a mission to Europa that would send a solar-powered spacecraft to make multiple close flybys of Jupiter's smallest moon over a three-year period. In total, the mission would perform 45 flybys at altitudes ranging from 16 miles to 1,700 miles.