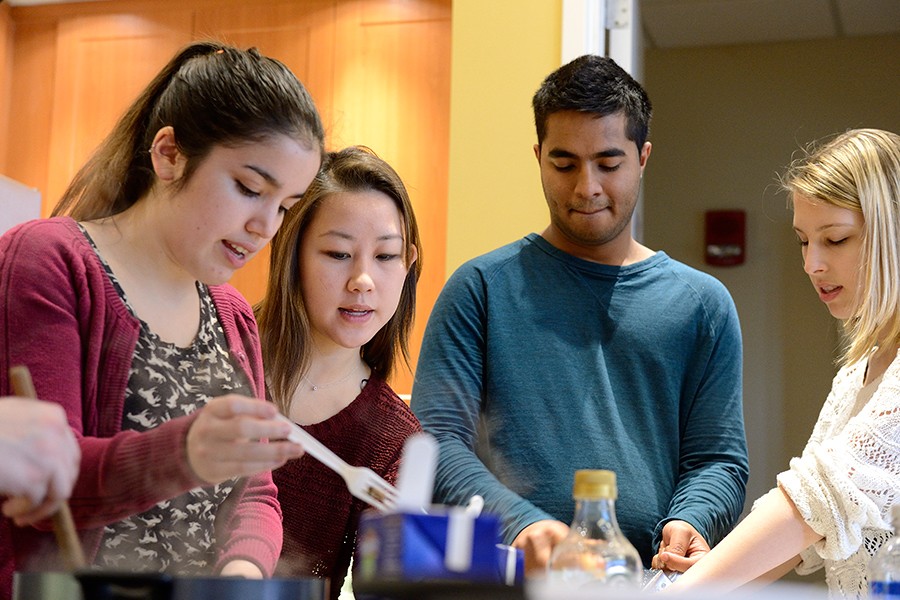 Emily Hu has mastered the art of dorm cooking. 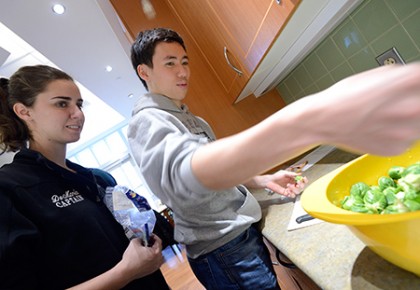 A savvy food blogger with an appetite for fresh, healthy ingredients, Hu can whip up apple crumble in porcelain ramekins using a toaster oven. She prepares a pumpkin spice mug cake within minutes in a microwave. The secret ingredient? Dr Pepper.

Hu has become a cuisinière of dorm kitchens, and she wants her peers to know that they can, too. She's sharing her recipes—many of which call for five ingredients or fewer—for a three-part Intersession course, Dorm Cooking 101. "My goal was to show students who don't cook that it's pretty simple," says Hu.

For three weeks every winter, JHU students escape their often-hectic academic routines for Intersession, a period in which they can pursue lively and engaging courses unrelated to their majors. Students assume many guises: yogi, sommelier, and beeroisseur, among other amusing roles. But no course gave them an opportunity to play chef for the day. So Hu, with her burgeoning gastronomic credentials, assumed the role of teacher.

Hu has dined at Noma, widely regarded as one of the world's best restaurants, after scoring a coveted last-minute reservation during her semester abroad in Copenhagen. She reached food blog fame when Buzzfeed featured a Greek yogurt pancake recipe from her blog, Not Your Average College Food, in "29 Versions of Your Favorite Comfort Food." So, she thought, why not try her hand at being a cooking class instructor, too?

The group of nine students splits into three groups to tackle recipes ranging in difficulty: Brussels sprouts with bacon, chicken thighs smothered in a honey-soy marinade, and a mushroom garlic risotto, a challenge assumed only by the more experienced members of the group.

As the smell of risotto fills the room, a student considers making a run to Nolan's on 33rd for a to-go container. But, of course, there are no leftovers anyway.

John Vingeo, a freshman whose mother is a freelance food writer in New York City, had no real background in cooking. He took on the Brussels sprouts trimming with reluctance but was pleasantly surprised to learn that the vegetables, once saturated in chicken broth and paired with bacon, aren't so bad after all. "Oh, these are really good!" he said when the group sat down to eat.

"I can relate to that feeling of accomplishment," Hu says. "Like 'wow I made that,' which makes the food even more enjoyable."

The students agreed that cooking is much better when you're with friends, and the compliments and pleasantries passed around the table suggested that bonds were formed over food. "I haven't had a chicken this good since the last time I ate at a restaurant," one student said to another.

They all agreed that the dishes were delicious, and easy to re-create.

"Can you send us more recipes?" asked a graduate student before running out the door. Hu directed the student to her blog. 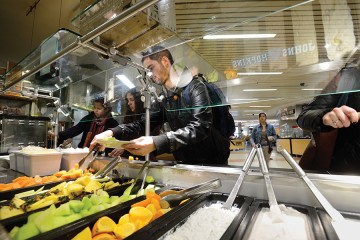 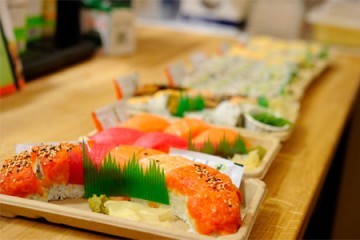