Oliver Stone, the iconoclastic filmmaker, and historian Peter Kuznick come to Shriver Hall on the Homewood campus Tuesday to talk about their 2012 documentary series and accompanying book The Untold History of the United States. Both the series and the book examine contemporary politics by revisiting some key moments in the 20th century, including the use of nuclear bombs on Hiroshima and Nagasaki and the role that display of force on civilian populations played in the development of the Cold War and the U.S.'s subsequent status in global politics and capitalism. Stone and Kuznick will screen a clip from the series and discuss the series on a panel moderated by political science professor emeritus Matthew Crenson. 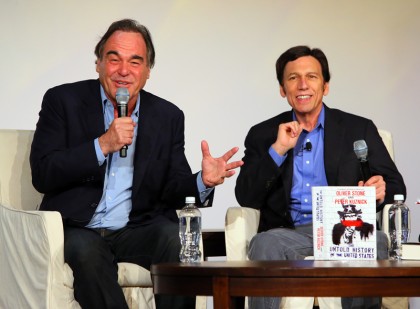 This event is the third in the fall speaker series from the New Political Society, a new student organization that aims to inspire political discussions that transcend conventional left-right party lines and encourages a free exchange of ideas. The panel discussion is presented in partnership with the Johns Hopkins Program in Film and Media Studies and the Johns Hopkin Film Society,

"The New Political Society was a student initiative that was founded to bring a little more serious, nuanced, and in-depth intellectual discussion to campus," says Sarallah Salehi, a member of the Class of 2016 and a NPS cofounder. He acknowledges that the university already has a number of student-run speaker series, including the Milton S. Eisenhower Symposium and the Foreign Affairs Symposium, that bring in high-profile experts to discuss current affairs, but adds that NPS aims to highlight less prevalent points of view.

"Obviously we have other organizations, like the MSE and FAS, that do similar operations, but we wanted to take a little different orientation and bring in some people who voice some very critical and substantive ideas that weren't present in the mainstream," Salehi says. "So we've had a very prominent Marxist economist [Richard Wolff, Director of Democracy at Work Foundation], and in November we have the former chief of staff to Colin Powell. (Colonel Lawrence Wilkerson). Both of these individuals have very insightful things to say."

Stone and Kuznick's Untold History certainly highlights some non-mainstream ideas. When it originally aired in 2012, it had critics from both the right and the left, as well as supporters from the left.

One interesting theme running through Untold is a complete rethinking of the U.S. relationship with the Soviet Union and Russia, where the series recently debuted on the state-owned Channel One. In late September, Russia's Rossiyskaya Gazeta ran a lengthy interview with Stone about the series, which a few Western publications excerpted into English.

"I think they're working in the same tradition of Howard Zinn when he published his People's History of the United States," Salehi says, referring to Zinn's 1980 book that retold American history from the point of view of common people. "I think what's so fascinating for me is how [Stone and Kuznick] take primary sources and do some very wonderful research and present a very unconventional and bombastic history against what the mainstream of thought is. I think it's very illuminating and I think it should be mandatory to look at historical events through different lenses. So maybe we mostly hear from major historians and the governments in their reports, which say, 'This is what happened and this is the sequence of events.' But there are other approaches and perspectives as well that could have very valid and substantial things to add to the discussion."

Oliver Stone and Peter Kuznick appear at Shriver Hall Oct. 14 at 7 p.m. The event is free and open to the public; VIP seats can be reserved for $20 via hopkins.nps@gmail.com. The event will be broadcast on the Johns Hopkins Ustream channel. Learn more