Low-altitude campaign will give insight into planet's geological evolution

NASA's Messenger spacecraft successfully completed an orbit correction maneuver that will delay its inevitable impact into Mercury and give scientists more time to collect more data about our solar system's smallest and innermost planet. 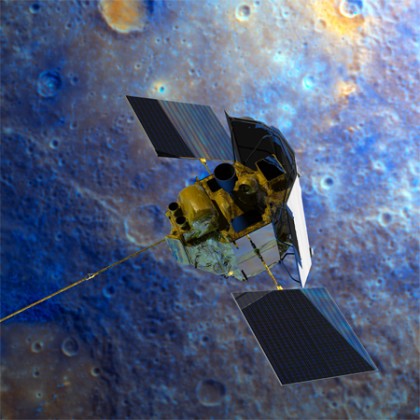 The maneuver—the first of four designed to increase the distance between the spacecraft and Mercury's surface—raised Messenger's minimum altitude from 113.9 kilometers (70.8 miles) to 155.1 kilometers (96.4 miles).

During the primary phase of the Messenger mission, the spacecraft's orbit was highly eccentric, drifting between 200 and 500 kilometers (124 to 311 miles) above Mercury's surface at closest approach, and between 15,200 and 14,900 kilometers (9,445 to 9,258 miles) at its farthest point. Spacecraft operators at the Johns Hopkins Applied Physics Laboratory conducted several spacecraft maneuvers to counter the forces that caused Messenger's path to drift upward, away from its preferred observing geometry.

"In this final phase of the mission, the opposite effect is happening," said APL's Jim McAdams, mission trajectory lead. "To extend the mission, we need to raise the minimum altitude by increasing the Mercury-relative speed of the spacecraft when it is farthest from Mercury."

The recent adjustment maneuver took place on Tuesday at 10:53 a.m. and lasted a little more than three minutes. APL mission controllers used two of the four largest monopropellant thrusters, with a small contribution from four of the 12 smallest monopropellant thrusters, to complete the move, which prepared the spacecraft for a low-altitude campaign.

"Messenger's results to date have revolutionized our knowledge of Mercury's global geology, the nature of volcanism across the surface, the cratering record, and the history of the planet's contraction, and they have also revealed unexpected discoveries, such as hollows," said APL's Nancy Chabot, who chairs MESSENGER's Geology Discipline Group.

During the remainder of MESSENGER's mission, the focus of geological observations will narrow from a global perspective to views of selected areas in unprecedented detail, she explained.

"With the low-altitude imaging campaign, MESSENGER will acquire the highest-resolution images ever obtained of Mercury, enabling us to search for volcanic flow fronts, small-scale tectonic features, layering in crater walls, locations of impact melt, and new aspects of hollows," Chabot said. "Those detailed views will provide a new understanding of Mercury's geological evolution."

Messenger's altitude at closest approach will continue to decrease until raised by additional maneuvers in September and October of this year and in January 2015. At that point, Messenger will have exhausted its available propellant and additional altitude-changing maneuvers will not be possible. The spacecraft is expected to impact the surface of Mercury in March 2015 having successfully completed four years in orbit about Mercury.

Messenger is a NASA-sponsored scientific investigation of the planet Mercury and the first mission designed to orbit the planet closest to the sun. The spacecraft was launched on Aug. 3, 2004, and entered orbit around Mercury on March 18, 2011, to begin a yearlong study of its target planet. 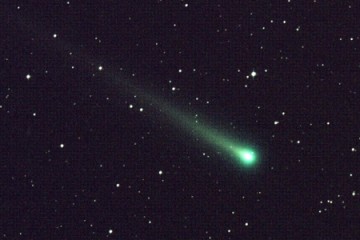 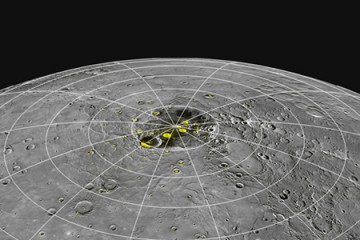