Johns Hopkins executive MBA candidate has scent of a winner

Thanks to their education and experience, Michael Fensterstock and his wife, Melissa "Momo" Matarese Fensterstock, can definitely say they have developed business sense.

Now they can also claim they know the business of scents.

Michael is an Executive MBA candidate at the Johns Hopkins Carey Business School. Melissa recently graduated from Harvard Business School. During a 2012 trip to Southeast Asia, they sniffed a business opportunity in a local product with a blend of natural fragrances that helps travelers avoid insect bites and nasty odors at the same time. The pair acquired the rights to the aromatic bug repellent and returned to the United States to bottle and market it to customers who might go for an upscale fragrance that can also fend off mosquitoes.

The pair won the New York competition and are now on their way to the global finals, which will take place April 29 and conclude on that day with an awards ceremony.

For the finals, Michael and Melissa will submit a 90-second video about Aromaflage's team, model, and business plan to a panel of judges consisting of Harvard Business School alumni around the world.

In October 2013, the Aromaflage team took part in the Johns Hopkins Innovation Factory Entrepreneurship Summit, an event that was hosted by the Carey Business School and involved various Johns Hopkins constituencies, including the School of Medicine and the Office of Technology Transfer.

Of the Executive MBA program at Carey, Michael says its schedule has enabled him to further his company's growth because it provides the learning experience within several residencies in Baltimore, online course work, and one eight-day residency outside the U.S. The program allowed him to keep a New York base for the launch of Aromaflage.

The feedback he gained at the Entrepreneurship Summit and through his Executive MBA program classmates helped lead him to potential retailers and partners, and based on market input, the couple shrunk the product's packaging and its price.

The prize for winning the New Venture Competition is $25,000. The Fensterstocks said they could use it to invest in the next Aromaflage venture, an outdoor candle that Michael predicted will be the best on the market. "We're creating a brand around the concept of 'fragrance with a function' and really want to own that space," he added. Like the fragrance, the Aromaflage candle will be healthy and attractive. Of course, it will repel bugs, too. 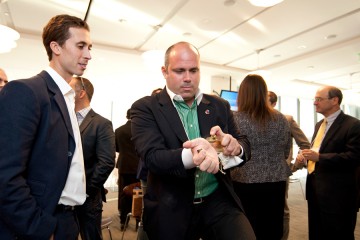