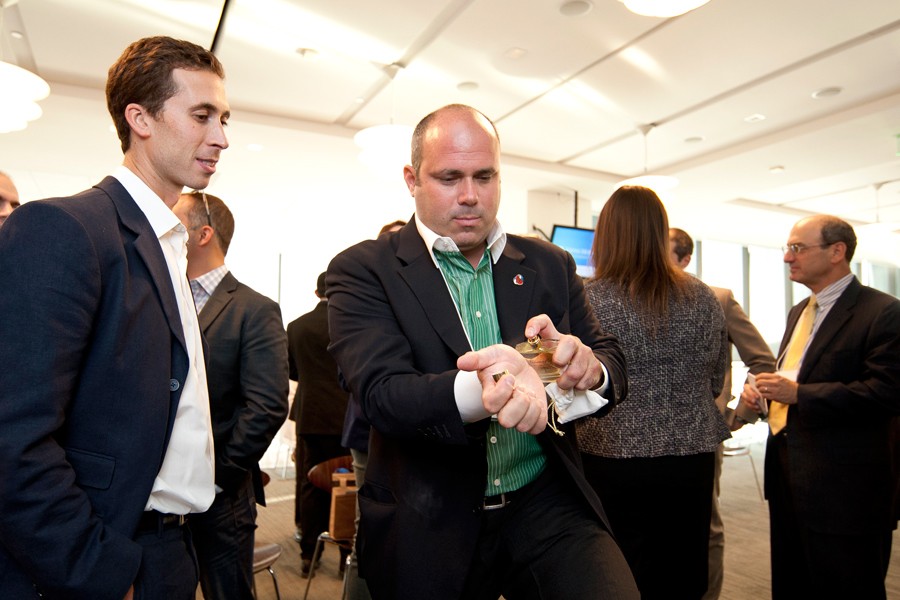 Image caption: Michael Fensterstock (left) speaks with a venture capitalist about his product, Aromaflage, an exotic botanical fragrance that doubles as an insect repellent.

"We repel bugs while smelling awesome," said Fensterstock, standing at the podium for the Mosh Pit Challenge portion of the inaugural Innovation Factory Summit, held recently at the Legg Mason tower in downtown Baltimore. At stake, up to $500,000 that a panel of five venture capitalists could dole out if they saw profit potential—think ABC's "Shark Tank" without the leather chairs, cameras, and Mark Cuban's sarcasm.

Fensterstock, a graduate student at the Johns Hopkins Carey Business School, and his wife, Melissa, were traveling in Southeast Asia this past winter when they discovered this "juice," an all-natural mix of essential oils and alcohol that kept bugs at bay. "We loved it, and it worked," said Fensterstock, who pitched the product alone (Melissa was out of town on business). The couple struck a deal with the juice's inventor, tinkered with the ingredients, designed an attractive perfume bottle, and presto: Aromaflage, "the fragrance with a function," was born.

Aromaflage has been on the market for three months and sells in more 70 specialty shops in such locales as Nantucket and Palm Beach, and online at the fledgling company's website, www.aromaflage.com. But now the husband-and-wife team wants to ramp up production and get the fragrance on shelves in big box retail stores and launch lines of candles, room diffusers, lotions, and other related products. For that, they need a significant amount of capital. But would the sharks bite, or bite back?

The Aromaflage team was one of four groups pitching their concepts at the event, put on by the Innovation Factory, a student group at the Carey Business School that provides support for Johns Hopkins affiliated students, alumni, faculty, employees, entrepreneurs, and startup businesses. Its goal is to connect innovative ideas with the right people to develop businesses quickly.

The Innovation Factory received 36 video pitches of products and devices, but only four made the cut for the main event.

The BOSS Medical team, a group of biomedical engineering students and alumni, pitched their concept for a disposable device that will enable surgeons to more quickly and less invasively harvest autologous bone graft material. They claim they've invented an optimal bone grafting solution that will benefit both patients and doctors.

"We are promising a safe, effective, and easier way to harvest bone with just a small incision," said JHU alum Maxim Budyansky, CTO and co-founder of BOSS Medical and a project engineer for Jhpiego.

While polite, the venture capitalists—most representing themselves, with one, Lena Feygin, representing her company, WeMultiply—didn't waste time on pleasantries. They wanted answers on the bottom line: How does it work? What makes your product different from your competitors'? Why make it cheaper? How many can you sell in a month?

The Healthify team pitched a way for health care organizations to improve case management (and increase reimbursements) via an automated process that manages patients' social needs, including food, housing, and mental health. Through Healthify, health care organizations, especially ones that service low-income populations, could get a richer picture of the issues their patients face and help link them with resources that can improve both their financial and physical conditions. Healthify has already turned some heads, and was one of 40 innovative startups showcased at "The Hive" portion of the TEDMED conference held last spring in Washington, D.C.

Another group pitched Hometrackr, a Carfax-like website for real estate that provides data reports on a home's history, including condition, ownership, and contracts.

All four groups made it to the due diligence phase, meaning they'll get a chance to meet again with investors so they can learn more and perhaps work out a deal.

"Once the due diligence phase is completed, we'll get an idea of how much the investors eventually decide to inject," said Adeel A. Quraishi, co-founder of Innovation Factory.

The full-day event also featured a lineup of speakers and breakout sessions on such topics as medical devices, social entrepreneuship, tech transfer, and funding. Opening remarks were made by Bernard Ferrari, dean of the Carey Business School, and Phillip Phan, the school's executive vice dean.

"The success of the event has given the organization strong support on all levels," Quraishi said. "We think we have a lot of traction now and hope to move forward with even better successes. It is our hope that our first event has sparked a stronger interest in entrepreneurial initiatives that we know exists within the student body at JHU."