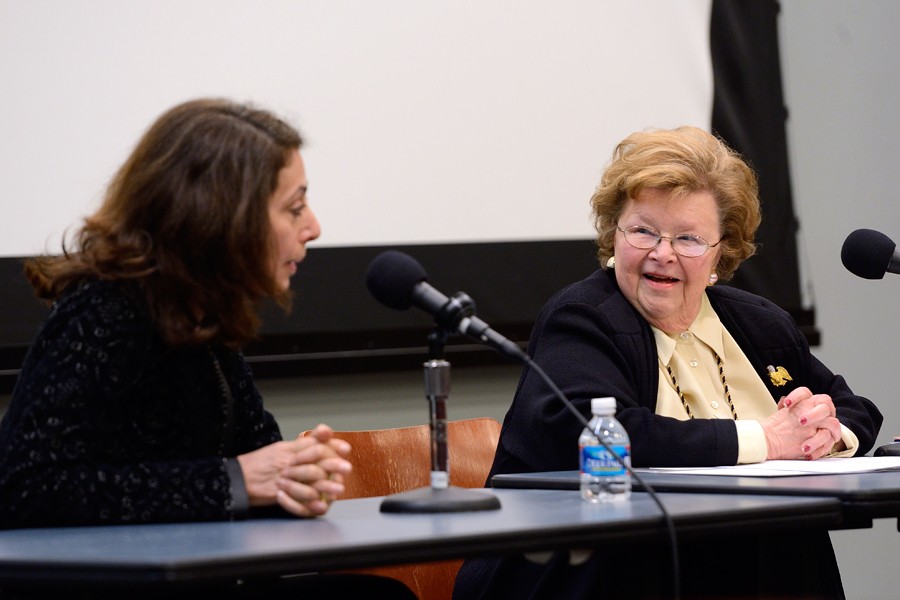 Maryland Sen. Barbara Mikulski paid a visit to Johns Hopkins University's Homewood Campus on Wednesday to introduce a screening of "Geraldine Ferraro: Paving the Way," a feature-length documentary about the political career of congresswoman and 1984 vice presidential candidate Geraldine Ferraro.

The film features archival footage and stills, interviews with Ferraro and commentary by a number of leading political figures, including President Bill Clinton and Hillary Clinton, President and Mrs. George H. W. Bush, former Secretary of State Madeline Albright, Mikulski—who was elected to the Senate in 1987 and is the longest-serving congresswoman in history—and 1984 Democratic presidential candidate Walter Mondale, who tapped Ferraro as his running mate.

The film explores Ferraro's difficult childhood, her rise to political prominence, the hurdles she faced professionally and personally, and how her history-making campaign as the first female nominee for national office by a major U.S. political party changed the national perception of what was possible for women. Ferraro died in 2011. She was 75.

The film was produced and directed by Ferraro's daughter, Donna Zaccaro, founder and president of Dazzling Media, a New York-based media production company. Zaccaro previously worked as a producer for NBC's "Today Show."

More information about the film can be found at http://ferraropavingtheway.com/.