She developed experiment to study brain activity during jazz improvisation

Malinda McPherson, a Johns Hopkins University senior from Belmont, Mass., has won a scholarship from the Winston Churchill Foundation of the United States to study at the University of Cambridge in England. 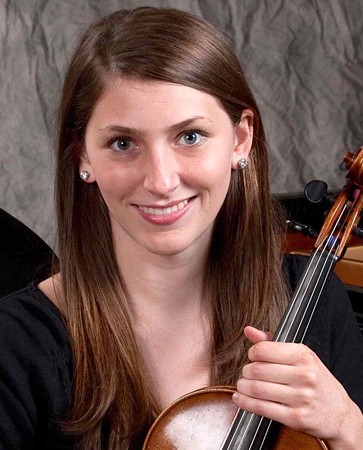 The Churchill Scholarship is awarded annually to at least 14 students who have demonstrated a capacity to contribute to the advancement of knowledge in the sciences, engineering, or mathematics by completing original, creative work at an advanced level.

McPherson is majoring in cognitive science and minoring in music, with the hopes of becoming a neuroscience research professor studying the effect of music on the brain. She will use her award to further her studies at Cambridge, where she expects to complete a Master of Philosophy at the Centre for Music and Science.

For the past two years, McPherson has explored music cognition in the lab of Charles J. Limb, an associate professor of otolaryngology in the university's School of Medicine. There she has developed an experiment to study brain activity during emotionally targeted jazz improvisation.

"Malinda is truly exceptional in every regard—she is a scholar, scientist, and musician who excels in all three," Limb said. "I look forward to seeing the remarkable contributions that she will undoubtedly make to the field of music cognition. Most importantly, she is one of the most genuine, kindest students that I have ever had the pleasure to mentor, and I'm grateful to have had the chance to work with her."

McPherson, who was introduced to the piano at age 5 and has played viola since she was 8, plays viola with the Hopkins Symphony Orchestra. She considers music her lifelong passion, and her work in cognitive science a way to understand it on a deeper level.

"I am honored to have been selected as a Churchill Scholar," McPherson said. "This would have never been possible without the encouragement of my professors and mentors at Hopkins, who have helped me pursue my interests in cognitive science and music, as well as the support of Kelly Barry, the director of fellowships and scholarships at Johns Hopkins, who guided me through the application process."

The one-year Churchill Scholarship pays all university and college fees, and is worth between $57,000 and $63,600, depending on the awardee's field of study.