Monumental sculpture is a gift from 1951 graduate Ralph O'Connor 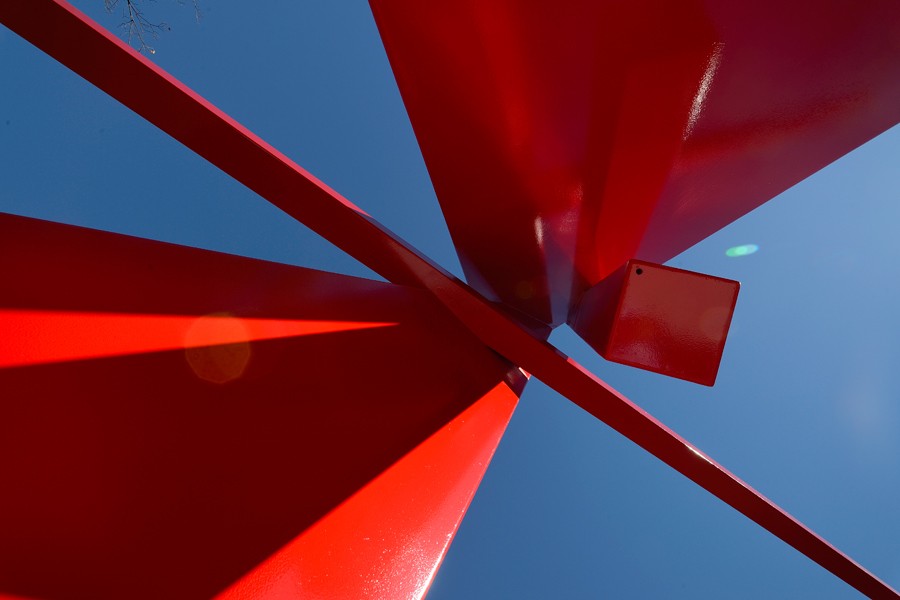 A hint of early snow floated across the cordoned-off site as a crane idled and the crew of three busied themselves in the gusting wind, preparing to hoist the first of several large steel segments into place. The crane ground into gear and a large shard of red steel rose into the air, swaying gently as it was guided home. The first act of installing Red Sails, John Henry's monumental sculpture, had begun.

The sculpture, a gift from alumnus and trustee emeritus Ralph O'Connor and his wife, Becky, stands 35 feet tall, nearly as high as the trees that surround it on the installation site just west of the new Undergraduate Teaching Labs. Henry himself was on hand for the installation, directing the crane operator and working with the other crew members to install and secure his creation.

Red Sails was completed in January 2011 and made its premiere at the Gallery Sonja Roesch in Houston. The sculpture demonstrates Henry's signature style of creating pieces that seem to defy gravity. These massive sculptures appear almost to float despite the obvious weight of their parts. O'Connor had long been an admirer of Henry's work and decided to add Red Sails to his private collection after viewing the piece in Houston.

"We are immensely grateful to Ralph O'Connor for this gift and for helping to expose the community to John Henry's work," said Winston Tabb, Sheridan Dean of University Libraries and Museums. "As we work to increase the presence of public art on campus, Red Sails stands as a vivid reminder of how art can enhance the campus landscape and provide inspiration to students, faculty, and any who encounter it."

O'Connor, a member of the Johns Hopkins Class of 1951, is a Houston-based entrepreneur, civic leader, and philanthropist. He is perhaps best known to students on campus for the recreation center that bears his name, but O'Connor's generosity spans Johns Hopkins. He has established a scholarship fund for undergraduates at the Krieger School of Arts and Sciences and a professorship in the Department of Biology, and his support was critical to the establishment of the Walter J. Stark Chair in Ophthalmology in the School of Medicine.

"Becky and I took great pleasure in seeing Red Sails every day for the last two years," O'Connor said, "and we are very happy it is now at Johns Hopkins where it can be enjoyed by so many people and brighten the campus that I love."

Henry was a founding member of ConStruct, the artist-owned gallery that promoted and organized large-scale sculpture exhibitions throughout the United States. Other founding members include Mark diSuvero, Kenneth Snelson, Lyman Kipp, and Charles Ginnever.

Johns Hopkins University is developing a rich and diverse collection of public art, with works by both major and emerging artists, and is in the process of making public art a vital part of life at Homewood and on the other university campuses. The Homewood initiative is an interdisciplinary collaboration headed by the dean of the Sheridan Libraries and University Museums and involving trustees, faculty, and alumni.

Among the notable works already present in open spaces and buildings across the Homewood campus are Martin Kline's cast bronze sculpture Willow, currently located at Levering Courtyard, and George Segal's painted cast bronze sculpture Woman with Sunglasses on a Bench, located in the Milton S. Eisenhower Library. Kendall Buster's nine-piece Vessel Field is suspended in Gilman Hall, Candida Hofer's image of the Peabody is exhibited each fall in the Eisenhower Library, Mark Dion's An Archaeology of Knowledge is on permanent exhibition in the Brody Learning Commons, and Willem de Kooning's Reclining Figure, on loan from The Willem de Kooning Foundation, is in the area between Remsen Hall and Dunning Hall. A future bequest will bring to campus Richard Serra's Pink Flamingos, a massive sculpture composed of two blocks of forged weatherproof steel. 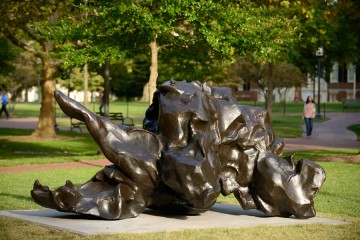