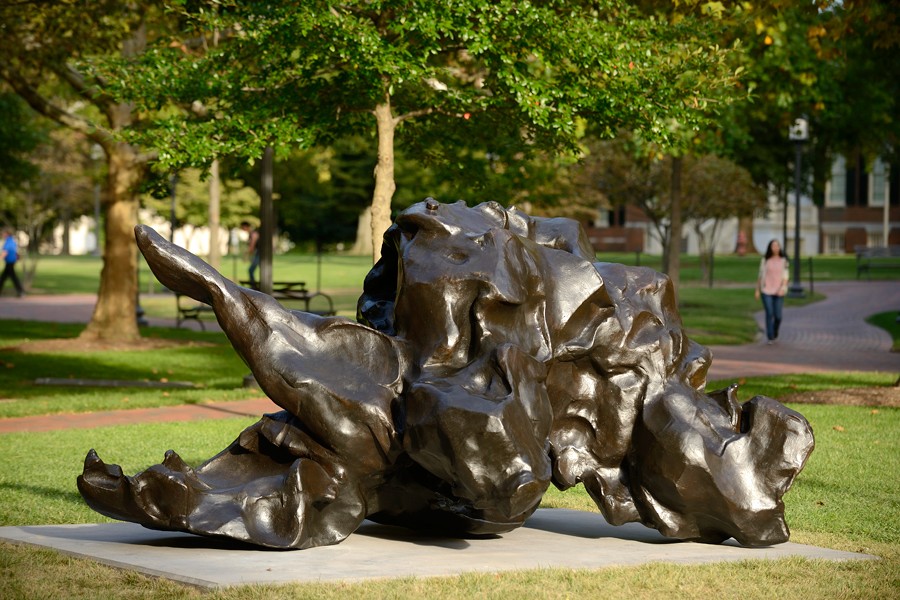 Last week, the university welcomed Reclining Figure (1969-1982) by renowned American artist Willem de Kooning to the Homewood campus. On loan from The Willem de Kooning Foundation in New York City, the monumental bronze sculpture is located between Remsen and Dunning halls on the north side of campus.

"We are honored to have been chosen to host this sculpture," said Winston Tabb, Sheridan Dean of University Libraries and Museums. "Johns Hopkins University is working to strengthen the presence of public art here at Homewood, and Reclining Figure will offer students, faculty, and members of the community an opportunity to study and enjoy a unique sculpture from one of the 20th century's most well-known artists."

Reclining Figure began in 1969 as one of 13 small-scale clay figures that de Kooning modeled by hand while visiting a friend's foundry in Rome. The foundry cast these first sculptural efforts in bronze and shipped them to de Kooning in New York. Encouraged by the British sculptor Henry Moore, de Kooning had an enlargement of Untitled #4 made by Bruce Hoheb and in 1982 approved it for casting in bronze by the Tallix Foundry in New York. The cast of Reclining Figure, on a five-year renewable loan to the university, is number five in an edition of seven plus two artist's proofs.

"The foundation is thrilled to share a work from its collection with the Johns Hopkins community," said Amy Schichtel, executive director of The Willem de Kooning Foundation. "We hope that it invites dialogue not only about de Kooning's work but also about the ongoing development of modern sculpture since Rodin."

Johns Hopkins University is developing a rich and diverse collection of public art, with works by both major and emerging artists, and in the process making public art a vital part of life at Homewood and on the other university campuses. Among the notable works already present in open spaces and buildings across the Homewood campus are the recent gifts of Martin Kline's cast bronze sculpture Willow, located at Levering Courtyard, and George Segal's painted cast bronze sculpture Woman with Sunglasses on a Bench, located in the Milton S. Eisenhower Library. Kendall Buster's nine-piece Vessel Field is suspended in Gilman Hall, Candida Hofer's image of the Peabody Library is exhibited occasionally in the Brody Learning Commons, and Mark Dion's An Archaeology of Knowledge is on permanent exhibition in the Commons. John Henry's Red Sails will arrive on campus in November, and a future bequest will bring to campus Richard Serra's Pink Flamingos, a massive sculpture composed of two blocks of forged weatherproof steel.

These accessible, vibrant installations will enliven the campus environment and generate encounters with art that advance the culture of learning, inquiry, and creativity that characterizes the Johns Hopkins experience, Tabb says. The Homewood initiative is an interdisciplinary collaboration headed by Tabb and involving faculty from across all disciplines and schools, but focusing primarily on the schools of Arts and Sciences and Engineering.

"We believe that public art enhances the student experience," said Jackie O'Regan, curator of cultural properties for Johns Hopkins University. "In its various forms, public art can add life to the campus's built environment and inspire those who encounter it. These works enhance the identity and uniqueness of the campus and strengthen the sense of community."

Willem de Kooning was one of the original abstract expressionist artists, a group responsible for the historic shift of attention in the arts from Paris to New York City in the years following World War II. He became one of the most influential artists of the 20th century. Born in 1904 in Rotterdam, the Netherlands, de Kooning immigrated in 1926 to the United States, where he quickly joined the nascent avant-garde art community in Manhattan. He is perhaps best known for his aggressive and richly painted Woman I (1950-52), which controversially reintroduced figure painting at a time when abstraction was in vogue, and has incited debates among painters, feminists, and art historians. Moving between figuration and abstraction, he never settled for a "signature style," allowing experimentation and visual problem solving to guide his production of an abundant body of work in many styles and mediums. In the 1970s and 1980s he produced prints, sculptures, and series of large, abstract canvases. De Kooning died in 1997 at the age of 92. His work has been widely collected and exhibited around the world.