The Johns Hopkins Digital Media Center and the Baltimore-based Wham City art collective have teamed up to present "Research," an artists' talk featuring three of the collective's prolific creators: musician/composer Dan Deacon, artist/comics artist Dina Kelberman, and video artist Ben O'Brien. This free event is part of JHU Family Weekend 2013 and presents three of Baltimore's more experimental creative minds who explore how we interact with technology and what it means to be an artist and an American in the 21st century. 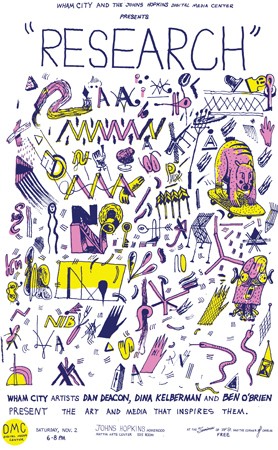 Of the three artists, Deacon is the most renowned. Since he first toured the country by bus as a solo artist and started developing the interactive live performances that helped hoist his star, Deacon has pushed and honed his musical ideas, which run from the esoteric sounds of electroacoustic composers to soundtracks from cartoons, video games, and pop music. The result is music that is as ambitious as it is instantly pleasurable, and Deacon continues experimenting and producing works such as this "Dan Deacon USA" video, a breathtaking space where the majesty of Aaron Copland and the hyperkinesis of the Cartoon Network coexist.

Video artist O'Brien has collaborated with Deacon on some wonderfully playful videos. O'Brien's work in Showbeast—a collective that makes "films for people who like television for the internet," as his website says—opens a portal into a realm where the production values and simple storylines of public television children's programs wander into existential absurdity, as if Pee-Wee's Playhouse decided to do Kafka short stories.

Kelberman has worked on a few of those Showbeast videos, but her more recent online art creates its own unique reflection of the digitally mediated world. Since 2011, Kelberman has been working on a project called "I'm Google," a hyper-dense, constantly evolving version of the cinematic match cut. The edit from the bone-weapon to the space orbital in the opening of minutes of 2001: A Space Odyssey is the most familiar example of a match cut, and a particularly effective one—in that one edit, the passage of time, the progression of technology, the entire course of human history leap forward centuries.

For the project, Kelberman culled through images found via Google Image Search and YouTube and arranged them into a grid based on "similarities in form, composition, color, and theme," she writes in a statement about the project, adding:

I feel that my experience wandering through Google Image Search and YouTube hunting for obscure information and encountering unexpected results is a very common one. My blog serves as a visual representation of this phenomenon. This ability to endlessly drift from one topic to the next is the inherently fascinating quality that makes the Internet so amazing.

"Research" was organized by Jimmy Joe Roche, digital video specialist at the Digital Media Center and lecturer in the Program in Film and Media Studies.

"Research" runs from 6 to 8 p.m. in 101 Mattin Center on Saturday, Nov. 2. Please RSVP for the event at its Facebook event page.