New Horizons spacecraft was built at APL, launched in January 2006

Alan Stern, principal investigator of NASA's New Horizons mission to Pluto, will provide an update on the Johns Hopkins-managed mission on July 23 at the Applied Physics Laboratory in Laurel, Md. Dr. Stern's lecture is titled "New Horizons to Planet Pluto: Exploring the Frontier of Our Solar System." 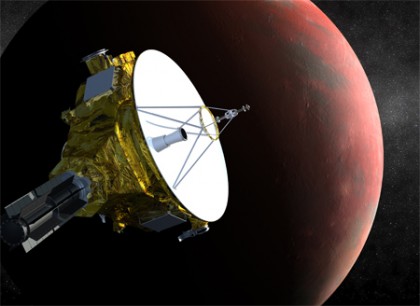 Image caption: Artist’s concept of the New Horizons spacecraft as it approaches Pluto and its largest moon, Charon, in July 2015

New Horizons was built at APL and launched in January 2006 and is scheduled to reach Pluto in July 2015. It is operated from Mission Control at APL. Earlier this month, the spacecraft came close enough to Pluto to produce its first distant images of its largest moon, Charon. For more information about the mission and the New Horizons probe, see http://pluto.jhuapl.edu.

The free lecture will take place at 7:30 p.m. on at APL's Kossiakoff Center. Families are welcome; the lecture will be appropriate for ages middle school and up. No RSVP is required. For driving directions, go to http://www.jhuapl.edu.