An undergraduate biomedical engineering team from Johns Hopkins won the $12,500 first prize today in the 2012 Collegiate Inventors Competition for devising a disposable suturing tool to guide the placement of stitches and guard against the accidental puncture of internal organs.

The winners were announced earlier today during an awards ceremony at the Newseum in Washington, D.C. The FastStitch team from Johns Hopkins was represented by Leslie Myint, Daniel Peng, Andy Tu, and Stephen Van Kooten.

In addition, a $4,000 award will go to the students' faculty adviser, Robert Allen, an associate research professor in the Department of Biomedical Engineering, which is shared between the university's School of Medicine and Whiting School of Engineering.

The collegiate inventors contest, in its 22nd year, is run by Invent Now, a nonprofit organization that recognizes and encourages invention in people of all ages. This year's winners were selected from seven university finalists—six teams and one individual entrant—working in engineering and medical disciplines. 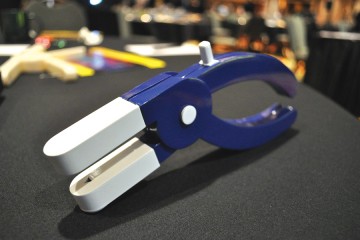 The future of suture?