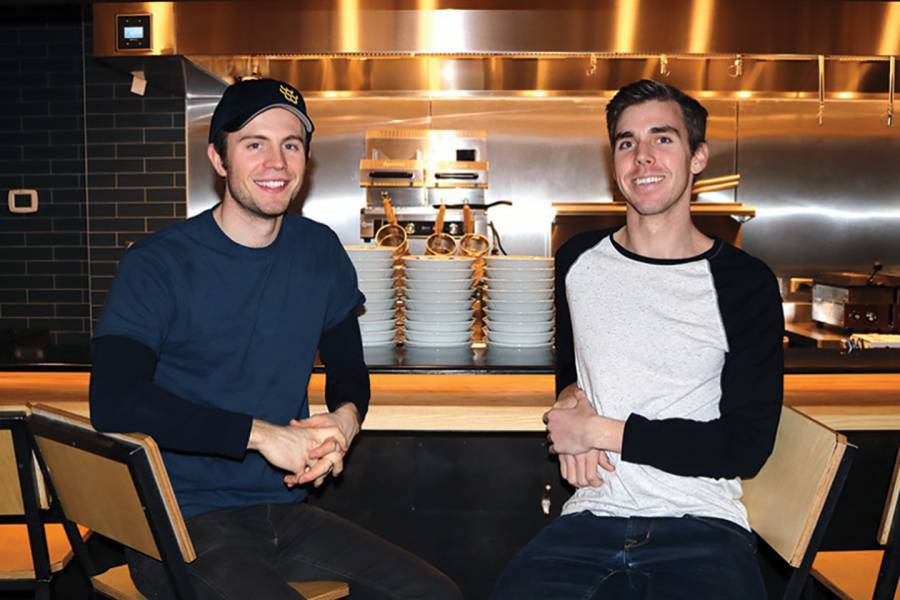 Monitoring social media at the start of the COVID-19 pandemic, David Forster, Engr '14, and Andrew Townson, A&S '14, the longtime friends behind Baltimore's PekoPeko Ramen, watched as the restaurants they followed on Instagram began to shut down. Eateries in Italy, Germany, Spain, France—all shuttering as the virus swept across country after country.

By the time Maryland restaurants closed their doors under orders from Gov. Larry Hogan, the duo had already begun thinking about the path ahead. Forster and Townson, who met as Homewood undergraduates, joined forces in 2017 to open PekoPeko, named for a Japanese phrase that indicates an empty, rumbling stomach. They were familiar with the day-to-day stress and decision making required of restaurant management—from when to adjust the menu to finding the best suppliers—and accustomed to tackling problems as a team. "In so many ways it's incredibly important and valuable to have a friend there because that friendship creates inherent trust," Forster says. "Often being owner of any organization can be pretty lonely because at the end of the day you can't look to someone else for direction, and having Andrew as a partner provided someone I could really confide in and who could offer guidance and support."

Forster decided to send staff home for their safety while still honoring the period's payroll for scheduled hours, and he and his wife, Mimi Gu, A&S '12, Nurs '13—a former ICU nurse who is finishing a degree in nurse anesthesiology at Georgetown University—took over operations alone. When that still proved unsustainable, Forster suggested a solution developed by some New York City restaurants. PekoPeko closed its takeout and delivery service in April and decided to launch Feed It Forward, exclusively accepting donations totaling more than $44,000 through May to contribute meals to workers at Johns Hopkins Hospital, as well as Union Memorial, Mercy Hospital, Northwest Hospital, Mount Washington Pediatric Hospital, and Sinai Hospital. They have also provided meals to visitors to the Franciscan Center of Baltimore soup kitchen.

"I was super excited about David's idea because community has always been at the heart of PekoPeko," Townson says. "The design of the restaurant, like the shared plates and the seating, was driven by this idea of space where positive experiences and memories could be formed with your friends and family around good food. So it felt like a very natural extension of the business because it made our table a little bit bigger in a lot of ways."

Sheltering in Baltimore and Long Island, respectively, Forster and Townson stay in constant communication through multiple daily texts and emails, and play online games together for stress relief. "Besides my parents, he's probably the person I talk to the most," Townson says. "I wouldn't want to go through this with anyone else." 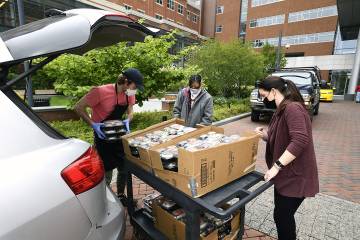 Published May 7, 2020
As restaurants struggle with a decline in business, alum-owned PekoPeko Ramen experiments with a solution that benefits the people who need hot meals most