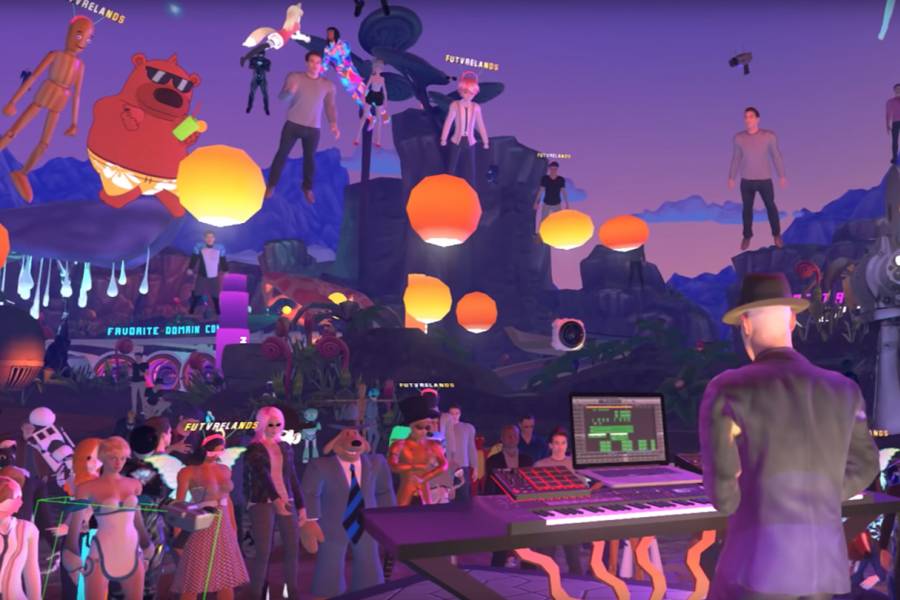 I'm front row, stage right, watching a couple flirt before a Thomas Dolby gig. "All right, let's shake hands," the red-headed fairy tells a man sporting a blue, full-body superhero suit, awkwardly fumbling her fingers toward his. Suddenly the man of the hour materializes onstage. Well, a version of him does, anyway.

"We're making history here, ladies and gentleman," says an animation made to look a lot like Dolby, down to the black suit and his signature fedora, as he launches into an EDM remake of New Order's "Blue Monday." "Here" is relative. I'm not literally front row, but rather sitting in my home office, mesmerized by what's streaming onto my PC monitor. Meanwhile Dolby—the real Dolby—is in his studio at the Peabody Institute in Baltimore, standing behind a keyboard and MacBook similar to what's appearing that Saturday afternoon on High Fidelity (HiFi for short), the virtual reality platform hosting the FUTVRE LANDS festival for which he's performing.

"I was playing the music live, and I was singing into the mic live. All of that was exactly as it would be onstage, for real," he explains a couple of weeks after the November show. To make his virtual look-alike, or avatar, come alive, Dolby was outfitted with seven trackers strapped to his hands, feet, back, chest, and head, allowing the audience to see precisely the way he was moving in person. HiFi engineers stood to his side, calibrating those trackers and lining them up to the exact coordinates of the stage.

Like me, the roughly 200 ticket-holders in the audience are plunged into this alternate universe via computer screen or virtual reality headset. Each time a user logs on, a new avatar appears. Humans, anime and manga characters, robots, horses wearing suits, and other creatures surround the stage, with their real-life counterparts able to speak or cheer through their mics and move, dance, or even fly in-world using handheld controllers.

Dolby has been a pioneer in electronic music since his She Blinded Me With Science music video premiered in the early days of MTV. Today Dolby, who leads Peabody Conservatory's Music for New Media program, is again breaking ground, this time as a live virtual artist. His gig was part of a lineup that included a best avatar contest and a trivia game show.

Having fun rehearsing for a 'virtual' concert in @HighFidelityInc VR. Look closely at the screen you'll see my 'virtual' hands playing my VR keyboard rig, and a planet full of groovy avatars occupied by real fans, who can hear the music! The gig will be Nov 16th--stay tuned. pic.twitter.com/i8xjvQlwO9

"There's a disruptive change coming," explains Philip Rosedale, the founder of High Fidelity who is perhaps best known for Second Life, the virtual world he founded in the early aughts that at its peak had upward of a million users. "These new VR headsets that are coming out, used correctly, enable us to have a face-to-face interaction exactly as if we were standing next to one another," he says. "As better and better headsets come out, we are going to see billions of people doing things on VR on a daily basis—things like going to school or going to events, certainly many of which will be entertainment or musical experiences like what happened with FUTVRE LANDS."

That's not to say it's a seamless experience. In a sense, the festival was a test to identify glitches and see how High Fidelity's servers would handle the load of hundreds of simultaneous users. They identified one crucial issue during Dolby's show: The software automatically lowers the resolution and frame rate the farther one avatar moves from another. This meant anybody not standing in the first few rows saw Dolby's avatar move slowly and jerkily.

"You put yourself in a vulnerable situation when you're at the mercy of new technologies like that, and I think my audiences have always respected that," he says. "And generally speaking, you can laugh it off when things go wrong."

Dolby first logged into HiFi in the middle of 2018 to explore how he could use it in the classroom. He was surprised to find that the platform had a MIDI API, meaning, for example, you could create music or lighting controls in the real world and import them into the virtual one, or vice versa. As he was cruising around, he ran into some HiFi execs in-world and introduced himself. He walked away owning an island, a fully built domain with different terrain, a beach, dock, yacht, and buildings.

With Reality Bloc island, his 14 students in Music for New Media were able to dip their toes in the simulated waters of nonlinear scoring, creating ambient music for the different areas of the island. They had to make sure that as users wander around, the music matches the feel of the space and that it transitions smoothly from one area to another. "You have to ask the question, Well, what's music really going to contribute here?" he says. "Is it going to take away from the sense of realism if there's an orchestra playing in the background? Or is it a good idea for there to be music to cue us what to expect and how to feel?"

The eventual impact of VR on the music industry is unmeasurable, Dolby and Rosedale agree. "What I do know is that the nature of the medium is so different, the same way TV is totally different from radio, VR will be different as a performance medium," Rosedale says. "It's my hope that the ways that musical performers will use VR are going to be unimaginably interesting."

Up-and-coming artists are already using VR for meet-and-greets, and Dolby suspects they'll eventually use it to create viral experiences that will propel them to fame. Beyoncé's staging company, he hypothesizes, could use it to lay out possible stadium show setups, complete with costumes, lighting, pyrotechnics, and moving platforms. And in a few years' time, Bruno Mars could do a world tour in a night, where every ticketholder gets a top-notch view and unparalleled sound quality, all from the comfort of their own homes. In other words, Dolby says, "there's no bad seat in the house." 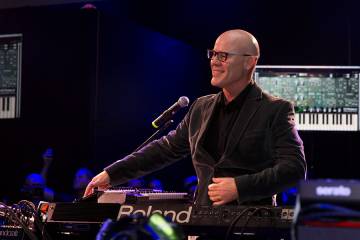 Thomas Dolby and the frontier of music

Published Aug 3, 2018
As his summer tour winds down, Thomas Dolby talks performing, composing, and his 35-year career as a musical pioneer