André Chung ("Ways of Seeing," photography) is an award-winning photojournalist and portrait photographer. He married the girl who encouraged him at age 19 to pick up a camera. They live in Columbia, Maryland.

Elizabeth Evitts Dickinson ("Tweet? Tweet!") has written for The New Yorker's website, The Washington Post Magazine, and The New York Times. A 2018 National Endowment for the Arts Literature Fellow in nonfiction, Dickinson was a contributing editor for this issue.

Macaela Mackenzie ("Support for Stressed-Out Teachers") is a New York–based writer covering women's health, wellness, and culture. She is the health editor at Glamour.

Joe Magee ("Tweet? Tweet!," illustration) is an illustrator, artist, and filmmaker based in the U.K. His work has been shown at galleries and film festivals, including the Victoria and Albert Museum and the Edinburgh International Film Festival.

Justin Renteria ("An Elevator to Space," illustration) has published artwork in The New Yorker, The Atlantic, Scientific American, MIT Technology Review, and many others.

A.C. Shilton ("Protein: The Next Generation") is a Tennessee-based freelance journalist. She splits her time between investigative projects, food writing, and working on her 45-acre sustainable farm. 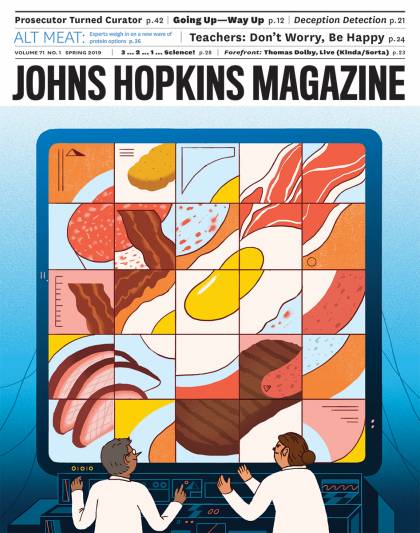 Illustrator and self-described "failed chemist" Dalbert B. Vilarino presents his take on the burgeoning alternative protein movement. ("Protein: The Next Generation") "It felt like a good fit to depict these proteins in a scrambled, reality-bending way on a computer screen," he says, "to suggest the complexity and inventiveness inherent in this endeavor." Vilarino's work has appeared in The New York Times, The Wall Street Journal, and Wired.