Launch of a lifetime

Alum Jeff Barber on why he took his father, a mechanical engineer, to the launch of the Parker Solar Probe in August 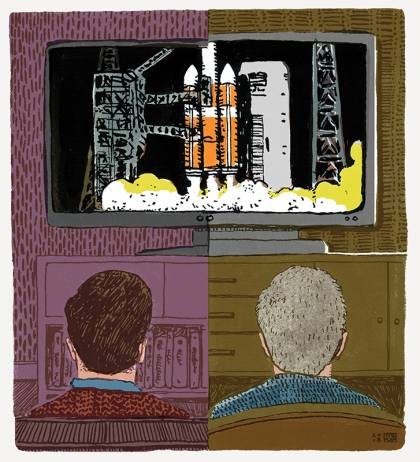 For most of his life and mine, my dad, Thomas J. Barber, was a mechanical engineer. He spent years studying the problems and possibilities of human flight and space travel, designing engines that could propel machines and humans into the ether. During his career, he collaborated often with the Johns Hopkins Applied Physics Lab and has a professorship of physics and astronomy named after him.

But like most kids, I was more interested in the Red Sox than fluid dynamics and would rather throw around a baseball on the weekends than build the model rocket Dad picked up at the store. We still have our differences—his phone lights up with news alerts from NASA while I prefer my daily ESPN updates—but my father and I have a great relationship these days. And as he's gotten older, his bucket list has slowly become my bucket list, and we've spent the last few years striking through items together.

Despite his professional expertise and accomplishments, Dad had never been to a space launch. So when I was invited to the August liftoff of NASA's Parker Solar Probe, it was a given that I, in turn, would invite my father. The Parker Solar Probe isn't just any old spacecraft—it will fly closer to the sun's surface than any probe before it, coming within 4 million miles of our fiery star and enduring brutal temperatures of up to 2,500 degrees. NASA scientists hope that the information the PSP gathers will revolutionize our understanding of the sun.

Our day in Cape Canaveral was a beautiful blur. We toured the labyrinthine facilities of NASA and were allowed an up-close view of the probe's enormous rocket, among the most powerful ever built. We had the honor of shaking the hand of Eugene Parker, the probe's namesake and one of the most brilliant astrophysicists of our time.

After dinner and a few restless hours of sleep, we were shuttled to a nearby research building where we could watch the launch from a safe distance. At 1:30 a.m., the launch window officially opened. Countdowns began. Countdowns were scrapped. The probe was going. The probe was not going. I couldn't help but look around at the worried faces of the people who had spent years working toward this one, fraught moment.

The probe and its rocket would erupt from the shores of Florida in the darkness of the following morning, by the time Dad and I were home in the Northeast, back to our daily grind. We watched it ascend into space the easy way—on the DVR.

Published Nov 20, 2018
The data gathered during its orbit will be relayed back to mission control beginning Dec. 7