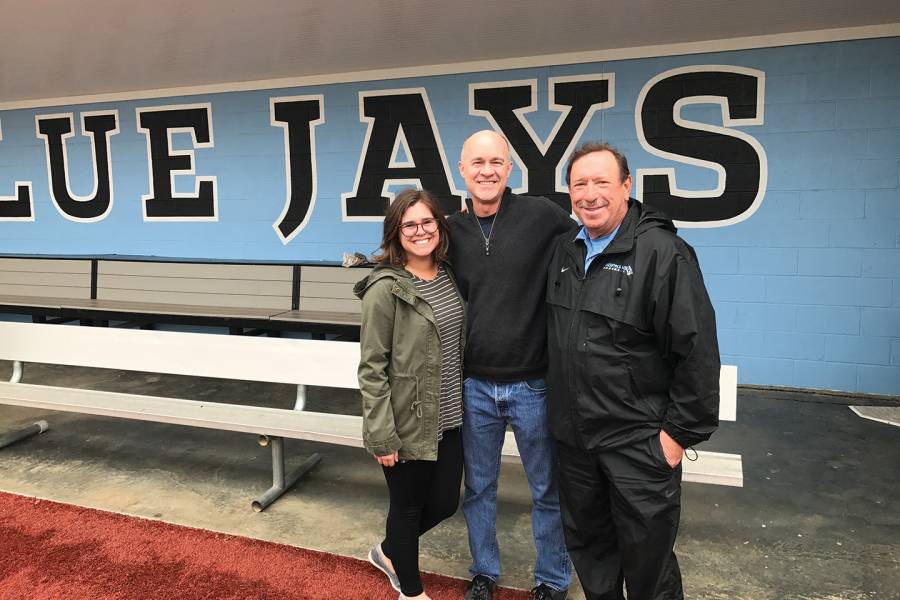 Bob Babb remembers an unusual ritual he took part in during his senior year on the Johns Hopkins baseball team.

"Before practice, we would get in lines and pick up stones off the infield dirt," says Babb, A&S '77, now the Blue Jays' longest tenured and most successful coach. "We had no dugouts, no scoreboard, just the field. And the field was rough."

Babb's most recent teams—Centennial Conference winner in 2017, runner-up in 2018—have played in nearly the same location as their coach did years ago but in far posher surroundings. Babb Field at Stromberg Stadium, which opened in 2015, features an artificial turf surface and base paths, as well as the professional-grade Murren Family Scoreboard. The only thing missing? Lights.

Brad Rosborough, A&S '80, who was a freshman picking up rocks alongside Babb all those years ago, played a critical role in topping off Hopkins baseball's current home. "My wife and I feel strongly about supporting the relationships and people that got us started in our lives," Rosborough says. His gift, alongside others, bankrolled the $600,000 lighting project that concluded with the installation in February 2018. "Hopkins Baseball and Bob were big parts of getting me started."

"When you're moving from high school to college, the level of athleticism and ability is much higher, and Bob was really good about helping to guide the younger players who made it onto the field on what to expect."
Brad Rosborough

Rosborough, who went on to Northwestern University to pursue an MBA before building a successful business career and raising a family in California, hadn't been back to Homewood since he graduated. But during a trip to the East Coast in 2017, he returned to campus to visit with Babb.

"We walked around the field and talked about a lot of memories. Bob is like an encyclopedia, he remembers everything," Rosborough says. Babb—a senior first baseman during Rosborough's rookie season—took the young outfielder under his wing when other upperclassmen didn't appreciate a freshman starter in their midst. "When you're moving from high school to college, the level of athleticism and ability is much higher, and Bob was really good about helping to guide the younger players who made it onto the field on what to expect."

"[Brad's] class was very close to me," Babb says, adding that Blue Jays players in those days would work Orioles games at Memorial Stadium to raise money for additional equipment. "We spent a lot of time together. I'd been their captain and their teammate, and for some, their coach. Some of my best friends today are people from that class."

"We hadn't seen each other in a long time, and yet it felt like we were picking up right where we left off," Rosborough says of his reunion with Babb.

He brought along his daughter, Cailin, a sports fan who graduated from the University of Texas, to help educate her about the priorities of the family foundation she and her brother will lead in the future. When the conversation turned toward the lighting project, it was his daughter who immediately said yes.

"She walked around the field, and she was just amazed. She said, 'We have to do this—it's important,'" Rosborough says.

Before daylight saving time kicked in, the installation of lights allowed the team to complete its early-season practices, and the Blue Jays played a handful of games under the lights. The flexibility to play past sunset means players don't have to miss as much class time as they used to for home games, and night games can attract a larger crowd of students to support the team.

The lights also give Babb a bit of a recruiting advantage—though he hardly needs one. In his four decades as the Blue Jays' manager, he's won more than 1,100 games and ranks fourth among all Division III coaches in that statistic. His teams have won 31 conference championships, including 14 since Hopkins joined the Centennial Conference in 2002. Babb's Blue Jays have appeared in the NCAA Division III tournament 20 times. In 2008, the Jays lost the national championship game by a single run. A lighted Stromberg Stadium qualifies Hopkins to host a regional round of that tournament, and it will help the Blue Jays attract players who might help Hopkins win that elusive championship for the first time.

"When high school players come in and see a lighted stadium, that's a big selling point," Babb says. "We're recruiting mainly against Ivy and Patriot League schools, and a lot of those schools don't have lights either, so this puts us on par with, or above, many of those programs."

For Rosborough, enabling that recruiting advantage is one way he can say thank you to his old friend.

"Bob has always been a teacher—he was a teacher when I thought he was just one of my teammates, and that's why he's become such an excellent coach," Rosborough says. 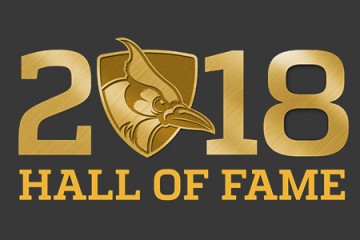 Published Dec 22, 2017
More than 180 student athletes and figures from Hopkins' sports history have been inducted since the Hall of Fame was formed in 1994 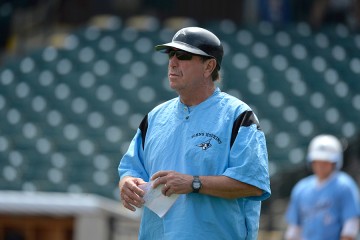