By Interview by Bret McCabe

Pianist Leon Fleisher had already forged one of the more distinguished careers in classical music when, in 1965, he lost the use of two fingers on his right hand due to focal dystonia, a neurological condition that causes the fingers to curl into the palm. He had made his debut with the New York Philharmonic at 16 in 1944, become the first American to win the prestigious Concours Musical International Reine Elisabeth de Belgique competition, in 1952; and started a prolific recording career with Epic Records in 1954. 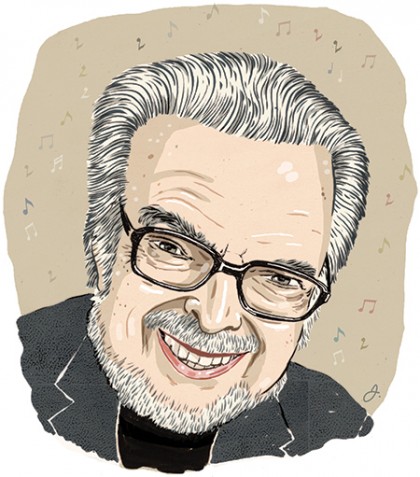 The focal dystonia sidelined his two-handed career, though he continued to teach, started conducting, and began playing a left-handed repertoire before he began a lengthy series of operations and treatments to regain the use of his right hand in the 1980s. In 2003, he performed his first two-handed repertoire concert at Carnegie Hall since 1947.

He has held the Andrew W. Mellon Foundation Chair in Piano at Johns Hopkins' Peabody Institute since 1959, Sony Classical issued a 23-CD box set of his entire recorded output in 2013, and this summer he released his first solo CD in a decade, All the Things You Are, which was nominated for a Grammy.

I was born in and grew up for almost 10 years in San Francisco, California, one of the most beautiful cities in the world. Curiously enough I am something of an extension of the place. You can't be born in San Francisco and not face life without a certain optimism and sense of beauty, I think. It's filled with hope, with promise, with potential.

We had a piano, which was a little old upright, and I had an older brother who took lessons, and it was obvious that he was not interested. I seemed to exhibit some kind of affinity for it. I found it fascinating. During his lessons I would hide in the corner and listen. When his teacher left, he would go off and play ball in the schoolyard, but I, I am told, went over to the piano and did everything that he tried to do reluctantly. I did it with enthusiasm, so they transferred the lessons to me. It seemed very pleasurable, and I got a lot of cookies for it. I had an affinity for it; it's not a talent. I took to it like the proverbial duck to water, and they had to keep getting me better and better teachers.

I had different styles of teachers. The Russian school of teaching—I remember that teacher very clearly. He was bald, wore spats, and had a pince-nez. It wasn't a good lesson [for him] until he made me cry, and to compensate for that he would always take me to lunch and feed me lamb chops, which I adore to this day. He was a prodigy producer. He taught Yehudi Menuhin's sisters.

Then I came to the notice of local musical personages. At that time the conductor of the San Francisco Symphony was a Frenchman who had just come to the city because the previous conductor left, and that conductor was a historic figure, too. That previous conductor was Alfred Hertz, as in Rent-a-Car, and he was bald as a billiard ball and had a wonderful flowing gray beard. Under [President Franklin] Roosevelt, Hertz created the WPA Orchestra, and part of their job was to give school concerts. And what better to do for school kids than to have another school kid come out and play? So he asked me to join them for some of the concerts. I played a Beethoven concerto, the second concerto in B-flat.

Then I came to the attention of the then conductor of the [San Francisco] Orchestra, a Frenchman, Pierre Monteux. The conductors knew and respected one another; they were friends. They agreed that I needed, what you would call it, "world class instruction." And they were both good friends of Artur Schnabel, who was one of the great figures of the 20th century in music, who would come out to San Francisco every two, three, four years and play. Both Monteux and Hertz got in touch with Schnabel, told him about me, and he very discreetly declined, saying he never accepted anybody under 16 for language reasons. He spoke in great abstractions in terms of concepts. I was 9.

As it happened, in the spring of '38 he came out to San Francisco to play, and had dinner with the Hertzes. They snuck me in through the basement, so when they opened the dining room doors, this kid was sitting at the piano. Being a gentleman, Schnabel resigned himself to the inevitable, so I played for him. I played a Sonetto del Petrarca of Liszt, the third one, and I played the cadenza from the Beethoven B-flat Concerto. I didn't hear it happen, but he apparently accepted me because he invited me to join him that summer in his home in Lake Como of all places, long before George Clooney moved there.

Not only was [Schnabel] a great figure in his time, he was a historic figure. The 19th century was a terrible century for music in a certain way. Until then, most of the performers were the composers themselves, and they had their gifts and their talents and high standards. But as performers began to emerge without those qualities, they began to dumb down their performances. They started to compete with one another. How can I get the public to go away from Joe Schmo next door? So whenever the composer perhaps would write "play softly," they figured they would have more success if they played loud. So they wreaked havoc with music.

There were two people at the beginning of the 20th century who came along and re-established the integrity of the composer. One was a conductor named Arturo Toscanini, and the other a pianist named Schnabel. They cleaned out the Augean stables of the 19th century and brought back the integrity of the composer and using that as a starting base for what everyone does. [Schnabel] taught me to look for that integrity in the score. It wasn't just a question of "I feel it that way." That was disallowed. You had to point to the text and see it the way the composer saw it to justify doing whatever choices you made, whatever decisions you made, and the way to do it. So the performer then achieved a sense of authority and a conviction.

The incredible thing about Schnabel was his level of inspiration. Whenever he touched the instrument—in his studio he had a little upright that he played, and the student played on a big concert grand—the sound that he drew from that [upright] was infinitely more beautiful. Every time he touched the keys, it was transformative as a human experience. His connection to the universe around him was astounding. So he was an inspiring teacher.

I worked with him for 10 years. Whoever got the idea that a musician's education should be the equivalent of liberal arts—four years undergraduate, two years for your master's—utter nonsense. He taught quite differently than other teachers, and I've adopted that for my own ways. He had only a small handful of students, and he requested that all students be present for everybody's lesson. If there were five students, you learned five times the repertoire. And you saw how we all shared the same challenges. It gave you an overview, and you began to realize that like there are laws of physics, there are laws of music in a way. A lot is made of the relationship between music and math, which I think is comparatively superficial. The real connection is between music and physics. Music is movement. Music passes in time from point A to point B. And because it's movement, it's subject to all the laws that govern movement.

At the same time, music is defying one of the great forces on the planet, which is the force of gravity. Whether it goes up or is a placid murmuring, it is movement. Before a piece of music, gravity is king or queen. The piece starts, and you defy gravity. When it's over, gravity takes over again.

I conducted a chamber orchestra in Germany 10 days ago, and the concert master had been a student of a great Hungarian violinist called Sandor Vegh. The Hungarians are amazing as a people, but in music they're extraordinary. And Vegh said to his orchestras, It's not that unusual to hear a string play a beautiful sound, get a beautiful song, but it's rare when you hear [the musicians] speak on the violin. And that's one of the great differences that you have today. These kids play their instruments marvelously well. The level of mediocrity is constantly rising. But Vegh said you rarely hear them speak on the violin. When they make music, it's like people who have learned a language phonetically. They speak it perfectly, but they haven't the vaguest idea of what they're saying. That's what Schnabel helped give me. He taught me to speak.

He also taught differently in the sense that whenever you played the piece, he would tell you everything that he knew about it. Therefore, he wouldn't hear it two times in a row. It was up to you to assimilate it. Use what you want to use, don't use what you don't want to use. So maybe you could bring the same piece back in a year or two. But basically you had to play something new every time. And that really upsets my kids because they want to be led step by step.

Even though I worked with Schnabel for 10 years, I was only able to cover a small fraction of the repertoire. He kicked me out after 10 years because I had gotten lazy. I'd learn a piece of music and instead of facing the challenges and trying to find answers for myself, I'd learn the notes and say, Oh, well, I'll have the truth laid out for me next week in the lesson. He recognized that and told me, You have to go out and make your own mistakes and fight your own battles with the music.

That started my whole learning process. It's twofold. You have to master an instrument; it has to become an extension of yourself—it's not a foreign object upon which you play. And the second is learning. The greatest thing that a teacher can teach is how to learn—not pass on your own personal prejudices, but what do you take into consideration when making your choices and decisions?

The greatest teacher I've had since Schnabel is teaching. It's a process of diagnosis and prescription. You have to diagnose what's not right, what's wrong, and instantly you have to come up with a prescription. [The focal dystonia] did help my teaching because I couldn't sit down and demonstrate. I had to find words that would take the place of that. I had to find a language. And it made me a more precise and exacting teacher, putting those ephemera into words.

The first time I started conducting, I felt very ill at ease. I felt my fanny was out there waving in the breeze. So I sat down. I still sit down when I conduct. It makes me more a part of the group and have better contact with them. And an orchestra is amazing. You talk about teams, like the [Baltimore] Ravens—that's 11 guys you got to tell where to go, where to block. Try that with 90 people, where some people blow across an opening, some people blow into an instrument with one reed, others blow into an instrument with two reeds, other people blow into brass tubes with different-sized mouthpieces. And you have to make them play simultaneously. You have people with catgut and horsehair. It's a wondrous group. A great orchestra, there's nothing like it in life. 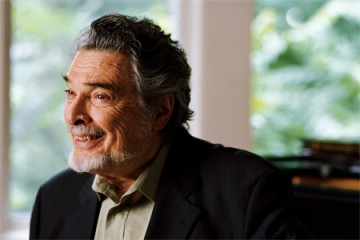