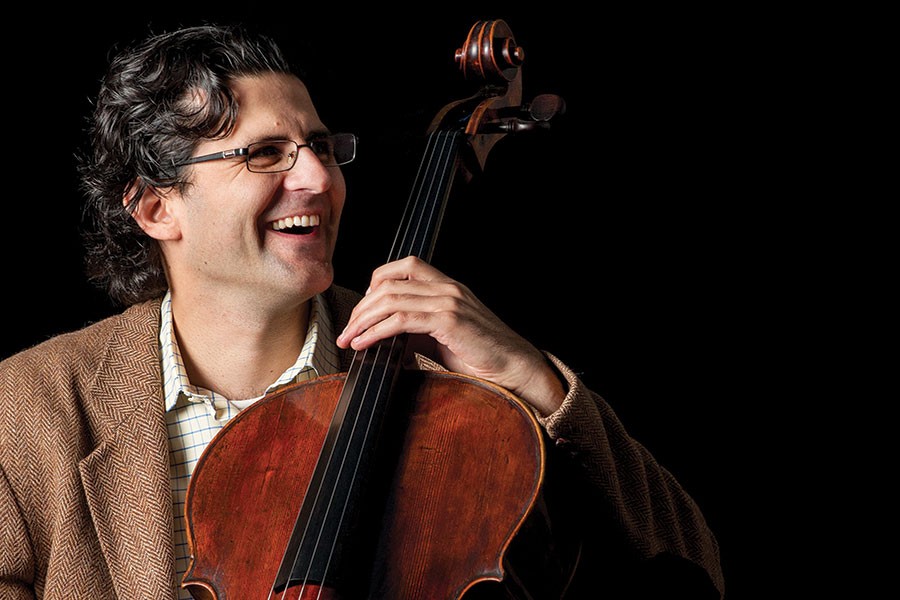 Image caption: Playing the 1733 instrument owned by Pablo Casals, Peabody faculty member Amit Peled will reprise the recital that the celebrated Spanish cellist performed at the Conservatory on Feb. 12, 1915.

Amit Peled looks around as if he can't believe his ears. The Peabody Institute cellist is sitting in the Bank of America lounge on the second floor of the Mount Vernon campus's Leakin Hall for a photo shoot, and the photographer has asked him to play. He draws his bow across the cello's strings and bathes the sunny lounge in rich, gorgeous music. Almost immediately Peled looks up and remarks on how great the room sounds. He turns to a student sitting nearby and asks, "Do we ever have concerts in here?"

The lounge would likely not be big enough to accommodate the audience interested in Peled's Feb. 12 performance, which is part of the Sylvia Adalman Chamber Series. On that day Peled performs the same solo cello recital that celebrated Spanish cellist Pablo Casals performed at Peabody a century earlier. In the Feb. 7, 1915, edition of The Sun, critic John Oldmixon Lambdin wrote that "an event of the greatest magnitude will take place at the Peabody Conservatory when Pablo Casals, who is called 'the world's greatest cellist,' will be heard in recital."

And Peled will perform on the cello that Casals played 100 years ago.

The cello, made by noted Venetian luthier Matteo Goffriller in 1733, was acquired by Casals in 1913 and became the instrument he turned to for the rest of his life. Casals died in 1973 at the age of 96, and the cello came under the care of his widow, Marta Casals, a cellist and formidable musical force herself. In 1956 the couple co-founded the Casals Festival, an annual event in San Juan, Puerto Rico, where Casals had eventually settled after exiling himself from Franco's Spain in 1938. They also helped start up the Puerto Rico Symphony Orchestra and the Puerto Rico Conservatory of Music. Marta eventually remarried, and she would go on to serve as artistic director of the Kennedy Center for the Performing Arts in Washington, D.C., and as president of the Manhattan School of Music in New York.

Throughout, she watched over Casals' cello, which she occasionally lent to cellists and which will eventually be donated to the Casals Foundation in Barcelona. In 2012, Peled had the opportunity to meet the musician's widow at her Washington apartment.

"When I first met Ms. Casals, the intention was not to get the cello," Peled says between takes with the photographer. "It was just to get to know her. I came to her apartment and played for her. She said, 'Usually I shut my ears off when I hear a young cellist, but I didn't do that when you played.'"

When standing, the dashingly handsome and casually charismatic 40-year-old Peled cuts a towering, lean figure. As he unpacked the cello before this photo shoot, it looked diminutive in his hands. When he sits to play, however, they complement each other like tango partners.

Continuing his story, Peled says, "Then she said, 'Let's have a glass of wine,' so we did." She remarked, he says, about his being a big guy and Casals' cello being small, but then suggested that if Peled had the time in the near future, he could come by her New York apartment and play it. Peled laughs, remembering the thought that raced through his head: What do you mean if I have the time? About two months later, he met her in New York and played Casals' 1733 Matteo Goffriller. Peled says it took some getting used to, but once he did, "it was amazing. And I thought that was it—I had this amazing opportunity to play this cello."

The photographer asks Peled to resume playing, and he again fills the room with lovely music, speaking quietly as the flash goes off. "You've got to understand, I grew up the furthest you can imagine from classical music, in a small community in Israel in the mountains," he says. "And when I started playing cello, the first thing I got when I was 10 was a tape of Casals playing on this cello. So from that moment to actually playing on this cello was quite a journey. So when a few weeks later [Ms. Casals] wrote me an email saying she decided to lend me the cello, I mean … ."

His voice trails off, and his eyes trace a circle around the room, suggesting he doesn't quite have the words to describe the honor.

He played Casals' cello for a few months before he realized it needed some work done on it to restore it to its full, rich character. Over the years the bridge and the neck that secured the strings had sunk, and some general restoration needed to be made to its woodwork. Peled says he only recently received the cello back from a shop in New York, where the restoration work took about a year to complete.

He stops for a moment to point out two places where the varnish is faded away on the back of the cello, one low and one higher up. Peled says that's where Casals' knee and chest rubbed against the instrument when he played, a reminder of just how much time musicians spend with their instruments: Their bodies leave marks on each other. So what made this cello so special to Casals? What separates one cello's sound from another?

"Nobody really knows," Peled says. "It's a group of reasons—age of the wood, the varnish, the craftsmanship. But what makes this one different? It sounds like a human, this cello, sort of like an old man talking. It sounds like someone is actually talking to you, which I think is the quality Casals liked about it."

Asked if he likes it, Peled shoots his interviewer a what-do-you-think? glance. The photographer then requests Peled to look in a certain direction while he plays for a few shots. He does so, closing his eyes and concentrating.

This interview and photo session were catching Peled before he and the cello were to leave for tours of Russia and the Midwest, where he would perform sections, but not the entirety, of Casals' 1915 recital, which will debut at Peabody. Peled found out about that century-ago concert from undergraduate Javier Martin Iglesias, a cello student from Spain who was doing research for a paper when a librarian told him about Casals' Peabody performances. Peled says the idea of reprising the concert came to him immediately after Martin Iglesias told him about it.

It's a golden opportunity to acknowledge how Casals, his music, and his cello continue to inspire young musicians today.

And on Feb. 28, 2016, Peled will perform Casals' 1915 Peabody recital at the Kennedy Center with a new solo cello piece commissioned for this cello, a way to keep its journey going into the next century. But who is the composer? Has he heard the piece yet? How long does he get to borrow the cello? So many questions are racing through the brain that they get thrown at Peled in quick succession. He opens his eyes, smiles, and shakes his head quickly, whispering, "Let's wait until the end of the piece." And for the next few minutes, everybody in the room falls silent, listening to the cello speak. 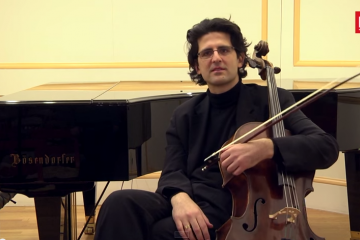 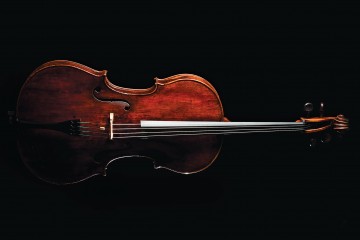