Johns Hopkins writers on where their work gets done 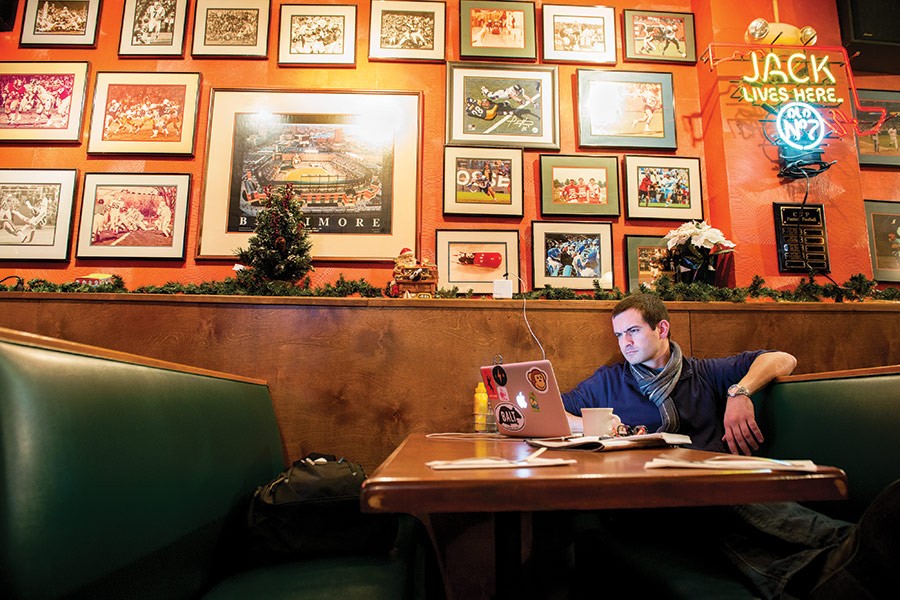 "There's a world where I can go and tell my secrets to … ." —Brian Wilson, poet

The forge and the oven—laboratory and mill—this is where stories are made.

Neither told nor remembered, but built, like a Chevrolet.

A work of literature can be written in a sanctuary consecrated to one's muse—be it a garret or the John Work Garrett Library—or a chain restaurant where the lunch crowd is too busy mopping up a plate of chimichangas to notice the man bent over a manuscript in the corner.

"I wrote most of my book about Poe and Borges at the [old] Chili's" in Belvedere Square, says John T. Irwin, who directed the Krieger School's Writing Seminars from 1977 through 1996.

(One of Irwin's most cherished memories occurred in 1983, when he escorted Jorge Luis Borges—the bard of Buenos Aires—to the third floor nook on Amity Street where Poe lived and wrote from about 1833 to 1835.)

The staff at Chili's "would let me stay in the booth after the lunch rush," says Irwin, whose afternoon labors resulted in The Mystery to a Solution: Poe, Borges, and the Analytic Detective Story (JHU Press, 1994) and enough customer reward points for a free trip to Las Vegas for the author and his wife, Meme Irwin, the longtime, and now retired, director of the Italian language program at Johns Hopkins.

"It's nice to be able to write in a restaurant after they're busy," says Irwin, who now does almost all of his work in his office—Room 80, Gilman Hall—a generic space that he has fashioned as much like home as possible.

There, with the sound of big-band jazz and 1940s swing floating from his computer, Irwin is surrounded by personal paintings, vases, rugs, and lamps amid mementos from a long career as he wrestles the blank pages of a new manuscript: a life of Weldon Kees.

But in public, he says, particularly a restaurant between shifts, "there are some people around, but they don't disturb you. There's still enough activity to dissipate the loneliness of writing."

And the loneliness of writing is agitation enough to drive one to the closest burger joint to sip cheap coffee while taking aim at the canon.

"I need an environment that gets the wheels moving," says Jay R. Thompson, a reporter, feature writer, and lecturer in the Whiting School's Center for Leadership Education. Thompson, who was in one of the last classes of MA science writers graduated from the Seminars, does much of his work at the Charles Village Pub.

"I'd sooner write a news story from the driver's seat of my Jetta before settling into my desk at home," he says. "The quiet of the domestic realm leaves too much room for noise spikes, as well as the frequent and frustrating cat-keyboard interaction."

The Writer's Desk, a book of black-and-white portraits of authors at work, was published by photographer Jill Krementz some 20 years ago. Almost none of the writers—from Ralph Ellison to Eudora Welty to Krementz's late husband, Kurt Vonnegut Jr.—are shown at a computer.

The relatively recent convenience of having one's entire office in a machine as slim as a copy of The Paris Review has not made moot the writer's room. Many a laptop scrivener savors the idea of a study, whether elegant or bohemian, that is his and his alone.

But technology has freed the cramped-quarters author from choosing between the kitchen table and the campus library.

"I designate a lot of [exclusive] places to write, and then I write somewhere else," says Jocelyn Slovak, affirming the contrary nature of the artist. A native of Danville, Pa., Slovak holds a Hopkins MFA in fiction and is a lecturer in the Writing Seminars now at work on her first novel.

Slovak lives with her fiancé, Nathaniel Norton, in a small apartment in Federal Hill.

"I never write at my desk, which is more a storage area for unsorted papers," she says. "I have taken up semipermanent residence at the tiny kitchen table."

Slovak has crafted short stories such as "Napoleon at the Himalayas" everywhere, from the floor of a crowded airport to an unmade bed. But in her mind (the imagination, where one's art is always perfect) there exists the place to practice the craft.

And she won't know until she discovers that place—"a nice little study"—if she will actually work in it.

One of her Writing Seminars mentors, the short story writer Jean McGarry, resides in the Ambassador, a 1930 apartment building within walking distance of the Homewood campus.

"I've written a number of stories here," says McGarry, a Pushcart Prize winner who released Ocean State in 2010. "There's a beautiful sunroom where I start the day reading Gibbon and then writing."

In the past year, the sunroom has been the incubator for the McGarry stories "Last Rites," scheduled for the Missouri-based literary magazine Boulevard, and "Strong Boy," published by the Hopkins Review.

A passage from "Last Rites" reads: "She'd wrecked Eenie's home, stinking up each room, breaking every good dish and glass, burning out appliances, scorching and smoking walls and ceiling … ."

Some of this, says Thompson—a bit of chaos that is neither yours nor your responsibility, drama a writer can observe behind the cloak of deadpan and headphones—can be helpful to composition.

"A productive writing experience requires a weird balance," he says, a fine line between the quick and the not-quite-dead.

"One of the most important attractions for me [at the Charles Village Pub] is the absence of the retirement home or day care feel" often present at a large-chain coffeehouse. "In Grand Rapids [where Thompson earned his BA] and every place I've lived and visited since, I've made a point of seeking a good place to read, write, and enjoy a warm coffee or a cold beer. It's terribly important to me."

Every ZIP code in Crabtown is crucial to filmmaker Matt Porterfield, whether he is screening a new movie in Paris or writing at the main branch of the New York Public Library while staying with his girlfriend in Manhattan.

Baltimore-born and a lecturer in JHU's Film and Media Studies Program, Porterfield sketched out most of his latest film (I Used to Be Darker) on D-level of Homewood's Eisenhower Library.

"There's never anyone on D-level," says Porterfield, who is also fond of the library's new Brody Learning Commons—"a smart building," he says, "high-tech, airy, natural light"—connected to the Eisenhower via a mezzanine.

But the writer/director of obsessive, heart-rending love letters to Baltimore—Hamilton in 2006, Putty Hill in 2010, and last year's Darker—inevitably finds himself writing in the house where he grew up, a cottage on Louise Avenue in Northeast Baltimore.

"Almost all of Hamilton was written in my dad's house," says Porterfield, whose father, the playwright Gordon Porterfield, used to show movies at home, films rented from the Pratt Library and projected onto a bed sheet.

"I move around from room to room, from my bedroom to the kitchen to the front porch where I can write for hours," he says. "Watching people walk up and down the street and hearing them talk really grounds my work. There's even a little balcony I like to use above the kitchen." 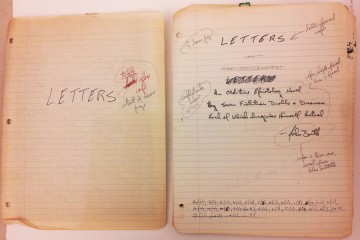