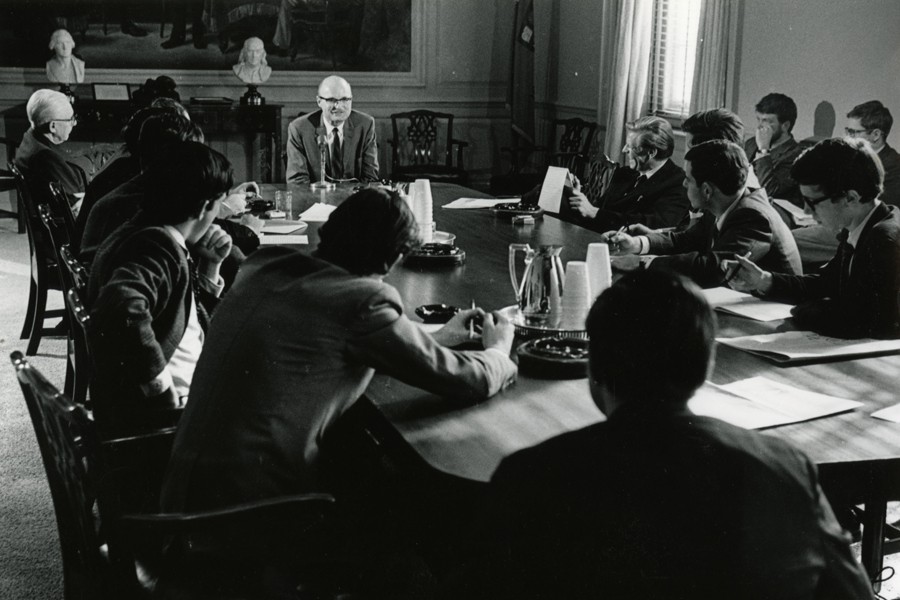 Image caption: John Barth, at the head of the table, teaches at Johns Hopkins in the 1970s.

The Johns Hopkins University Sheridan Libraries today announced the acquisition of the John Barth Collection, which documents the creative output and career of John Barth, the American fiction writer, essayist, and teacher.

Barth, a National Book Award winner, was a leading figure in the university's Writing Seminars department, and his work is central to 20th-century literary history, especially the development of the contemporary novel, the articulation of international postmodernism, and the identity of Maryland's Eastern Shore in American literature. He is the author of 17 novels and collections of short fiction and three collections of essays.

"We are very pleased to be the stewards of a collection so closely tied to the history of the university and the life of a beloved professor," said Winston Tabb, Sheridan Dean of University Libraries and Museums. "The John Barth Collection will offer researchers unrivaled insight into the development and work of a writer who bridged the gap between regional American fiction and international experimentation. The collection will also provide opportunities for scholars to study more broadly the literature of the late 20th and early 21st century—a time of great change in terms of literary culture, reading practices, and publishing opportunities."

The collection contains the complete extant notes and manuscripts for Barth's published writings and many of his lectures, correspondence between Barth and other major literary figures, all the English-language editions of Barth's work and many translations, as well as anthologies, journals, and works of criticism that include Barth's work or scholarship about it.

In addition, the collection includes most of the 1,200-volume library of Barth and his wife Shelly: books belonging to Barth from his student days, with his annotations; books inscribed by students, colleagues, and important writers of the past several decades; and books that were instrumental to Barth in his own writing. The collection also includes photographs, recordings, juvenilia, and home-made posters and slides that Barth used to illustrate talks and readings.

"I'm pleased to have these materials at Johns Hopkins because it was at Hopkins—and largely thanks to Hopkins and my fine undergraduate- and graduate-school professors—that I managed to become a writer," Barth said.

Barth was born in Cambridge, on Maryland's Eastern Shore, and earned his bachelor's degree in 1951 and his master's degree in 1952 from Johns Hopkins University. Before returning in 1973 to teach at his alma mater, he held professorships in the English departments of Penn State University and the State University of New York at Buffalo. Barth became a professor emeritus at Johns Hopkins in 1995 and was afterward a senior fellow at Washington College in Chestertown, Md. He received an honorary Doctor of Humane Letters degree from Johns Hopkins in 2011.

"He's a groundbreaking stylist. His writing has influenced many younger writers, such as Julian Barnes, David Foster Wallace, and Salman Rushdie, to name just a few," said Jean McGarry, professor and co-chair of the Writing Seminars. "He also educated a generation of fiction writers as a professor in the Writing Seminars for nearly 20 years. I can attest from experience in his classroom that Jack was a memorable teacher and writing mentor: pithy, exacting, generous, funny, and one to whom students feel a lifetime of loyalty and affection."

The John Barth Collection will be the subject of a major exhibition in the fall of 2015, when most of it will also be opened up to researchers.