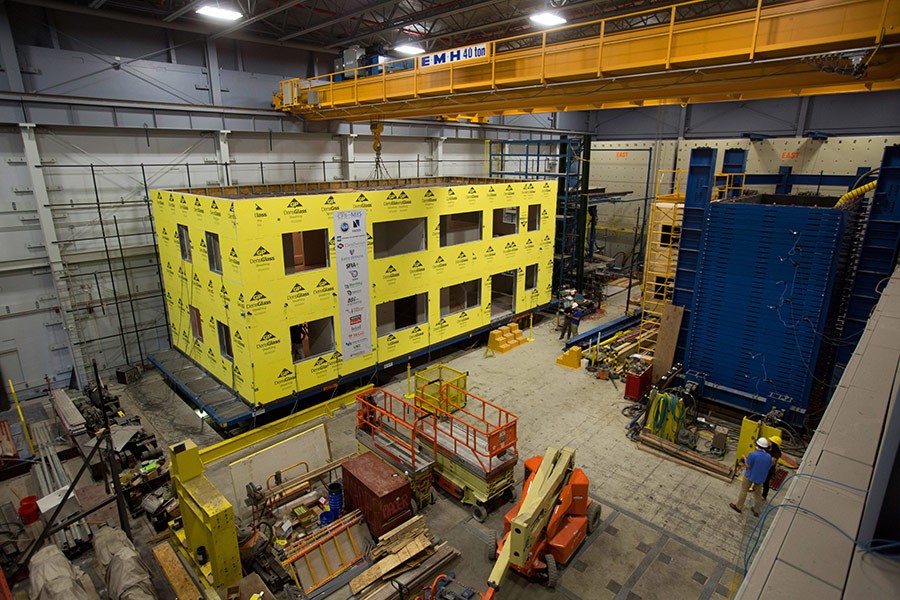 Image caption: Shaking this cold-formed steel model building with the force of the Northridge earthquake showed that the material could potentially be used to replace current, more costly fabrications.

A dozen people sporting hard hats as yellow as school buses crowd onto a third-floor balcony overlooking a cavernous engineering laboratory at University at Buffalo one breezy Friday morning in mid-August.

Their excitement is almost palpable. The event they are about to watch is the culmination of a three-year, $1 million National Science Foundation–funded research project involving scientists from six universities, as well as consultants from the steel industry.

Led by Benjamin Schafer, chair of the Department of Civil Engineering in Johns Hopkins' Whiting School of Engineering, the project promises to be a game changer in the world of earthquake engineering, leading to safer, sturdier, and more environmentally friendly and sustainable buildings.

Suddenly, a voice booms through the loudspeakers: "10, 9, 8, 7, 6, 5, 4, 3, 2, 1, RUNNING!" and a bone-rattling "BOOM!" ricochets off the concrete floor upon which a massive platform supporting a two-story building begins to shudder and jerk with the same force as the famous Northridge earthquake, which in 1994 caused dozens of deaths and billions of dollars in damage in the Los Angeles area.

Twenty seconds later, it's all over. The lab falls silent as Schafer, the Swirnow Family Scholar at Johns Hopkins, races nimbly down the stairs from the observation deck to examine the building along with Kara Peterman, a Johns Hopkins doctoral student from Fairfax, Va., who is working on the project as part of her dissertation.

Together, the pair diligently scrutinize the two-story 50-foot-by-23-foot model building inside and out, scouring for obvious cracks, fissures, loose screws, and anything else out of whack. At least upon first examination, the building, comprising a skeleton of cold-formed steel and oriented strand board, has endured the jolts and shocks "extraordinarily well," according to Schafer.

"Its performance was far better than we would have guessed it would be," Schafer says, obviously pleased. "This building would have been fine in the Northridge quake. We are very, very happy. Of course, we still have a lot of work to do—months of it."

Since that initial test, the team has spent days conducting a full autopsy of the building, including collecting and interpreting data from the more than 150 sensors and eight video cameras installed in and around it to record and track three-dimensional movement during the tests, and to make note of any component of the building—from screws and nails to beams—that may have failed. The team subsequently will take the building down piece by piece, on a scavenger hunt for damage that may be hidden by nonstructural elements such as drywall and interior partition walls.

The crucial aspect of the building design and construction is its use of cold-formed steel. Made of 100 percent recycled steel, cold-formed steel is fashioned by bending thin sheet metal (about 1 millimeter thick) into the desired shapes. Though it is already commonly in use today to frame low- and mid-rise buildings such as apartments, college dormitories, and small hotels, up until now experts have had to take a very conservative approach to how cold-formed steel structures would withstand extreme conditions such as earthquakes.

That is why the Johns Hopkins team's work has such important implications. The results are expected to lead to improved nationwide building codes that could make cold-formed steel buildings less costly to construct than those using more traditional materials.

Several days into the autopsy, the team has found some damage to the panel seams (the straps of steel that connect two wooden panels together in the shear walls), and the gypsum board panels on interior nonstructural and exterior gravity walls cracked a bit around window and door openings. Exterior weatherproofing sheathing showed some damage at seam lines and some corners.

"There was some apparent minor damage but nothing indicative of failure," Peterman says. "We now have a basic idea of what happened, but it will take months—maybe years—to fully understand the implications. And yes, the whole thing was just as much fun as it sounds!" 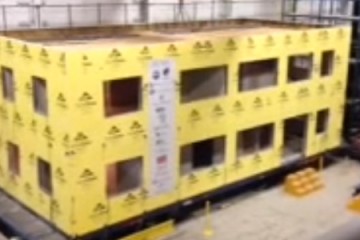 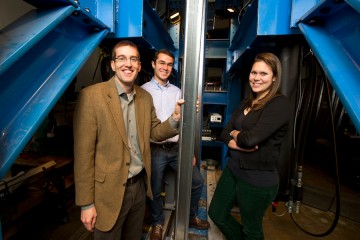