Earthquakes never occur when you need one, so a team led by Johns Hopkins structural engineers is shaking up a building themselves in the name of science and safety. 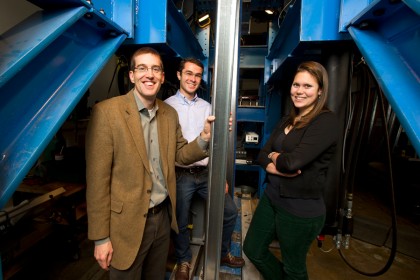 Using massive moving platforms and an array of sensors and cameras, the researchers are trying to find out how well a two-story building made of cold-formed steel can stand up to a lab-generated Southern California quake.

The testing, taking place this summer at the University at Buffalo's earthquake engineering research center, marks the culmination of a three-year, $1 million research project involving scientists from six universities and design consultants from the steel industry. The work is taking place in the only facility in the U.S. capable of replicating an earthquake in three directions beneath a building measuring 50 feet long, 20 feet wide, and 20 feet tall. The trials will wrap up in mid-August when the researchers will shake the unoccupied structure with forces comparable to those at the epicenter of the catastrophic 1994 Northridge earthquake in Los Angeles, which claimed dozens of lives and caused billions of dollars in damage.

The researchers may sound like a wrecking crew, but their work has important implications for the people who construct, live, or work in buildings. The results are expected to lead to improved nationwide building codes that will make future cold-formed steel buildings less expensive to construct than current ones. Also, the new codes could, in certain cases, make lightweight cold-formed steel buildings less costly to construct than those made of materials such as timber, concrete, or hot-rolled steel. In earthquake-prone regions, these code updates should help structural designers and builders reduce the likelihood of a costly and life-threatening building collapse. Finally, the research, funded primarily by the National Science Foundation, with added support from the steel industry, could lead to broader use of building components made of environmentally friendly cold-formed steel, which is made of 100 percent recycled steel.

Cold-formed steel pieces, commonly used to frame low- and mid-rise buildings, are made by bending sheet metal, roughly one-millimeter-thick, into structural shapes without using heat. Cold-formed steel already has been used in an array of structures including college dorms, assisted living centers, small hotels, barracks, apartments, and office buildings. Although the material is popular, some large knowledge gaps exist regarding how well cold-formed steel structures will stand up to extreme conditions—including earthquakes. This has caused engineers to be very conservative in their design methods. The tests being conducted atop two "shake tables" at the University at Buffalo should help close those information gaps and lead to better constructed buildings, says lead researcher Benjamin Schafer of the Whiting School of Engineering at Johns Hopkins.

"This is the first time a full building of cold-formed steel framing has ever been tested in this way, so even the small things we're learning could have a huge impact," said Schafer, professor and chair of the Department of Civil Engineering. "We'll see code changes and building design changes. We think this will ultimately lead to more economic, more efficient, and more sustainable buildings."

In May, Schafer's team began supervising a construction crew in assembling a first version of the test building. This structure, about the size of a small real estate or medical office building, was mainly composed of the cold-formed steel skeleton and oriented strand board (OSB) sheathing. When those first tests were completed, that structure was torn down and replaced by an identical building that also included non-structural components such as stairs and interior walls. The researchers are trying to determine whether these additions, which do not support the frame of the building, can still help reduce damage during a quake. It is the second version of the test building that in August will face the strongest seismic forces, as recorded during the Northridge earthquake.

At the test site, the construction of the buildings, the shake trials and the collection of data have been overseen by Kara Peterman, a Johns Hopkins civil engineering doctoral student being supervised by Schafer. She has been gathering data from more than 150 sensors and eight video cameras installed in and around the test buildings. During a simulated quake, these instruments are designed to track the three-dimensional movement of the structure and to record any piece in the building that has "failed," such as beams that have bent or screws that have come loose.

Peterman said tests on the first version of the building yielded surprisingly good results. "It moved a lot less than we were predicting," she said. "We did find one small portion of the steel that failed, but that was because of a conflict in the design plans, not because of the way it was constructed. And that small failure was purely local—it didn't affect the structure as a whole."

She said she is anxious to see how much the addition of interior walls and other non-structural components will add to the building's stability during the more powerful tests ahead. Peterman predicted that the final high-intensity test is likely to damage the building, but not enough to cause a catastrophic collapse.

When the testing is completed and the results are analyzed, Schafer's team plans to incorporate the findings into computer models that will be shared freely with engineers who want to see on their desktop how their designs are likely to respond in an earthquake. "The modeling," Schafer said, "will create cost efficiencies and potentially save lives."