The 2013 Johns Hopkins baseball team has had more than its share of thrills, late-inning heroics, stellar individual accomplishments, and victories.

Heading into the final games of the regular season, the Blue Jays ranked No. 3 in the nation in Division III and, as of press time, boasted a 33-5 record.

The season notably included a 20-game winning streak—the third longest in program history—that ended with an 8-7 loss at home to rival Gettysburg on April 16.

The team is 30-0 when leading after six innings, owing to a stellar and stingy bullpen. Overall, the pitching has exceeded early-season expectations and leads the Centennial Conference in all categories including ERA (2.85) and strikeouts per game (7.44).

The ace of the staff has been junior Tyler Goldstein, who leads the team in victories (8), innings pitched, and strikeouts.

While many Blue Jays hitters have excelled this season, senior first baseman Jeff Lynch has been a force of nature. Lynch was named the Centennial Conference Player of the Week for April 15–21. During the stretch, he batted .444 with four home runs, 11 RBIs, and nine runs scored. The Sewell, N.J., native leads the Blue Jays in almost every hitting category, including batting average (.411), doubles (23), RBIs (45), and slugging percentage (.704).

As of April 29, sophomore Colin McCarthy had reached base in all the games he started this year.

The team won the regular season Centennial Conference and finishes its season at home on May 1.

In early May, Johns Hopkins will compete in the Centennial Conference Tournament and the NCAA regionals. If the Blue Jays can escape the regionals, they will head to Appleton, Wis., the site of the 2013 NCAA Division III Baseball Championship, to be held May 24–28. 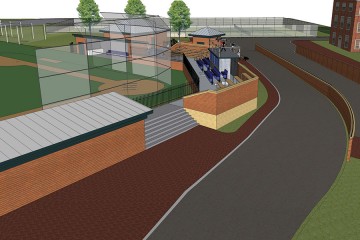