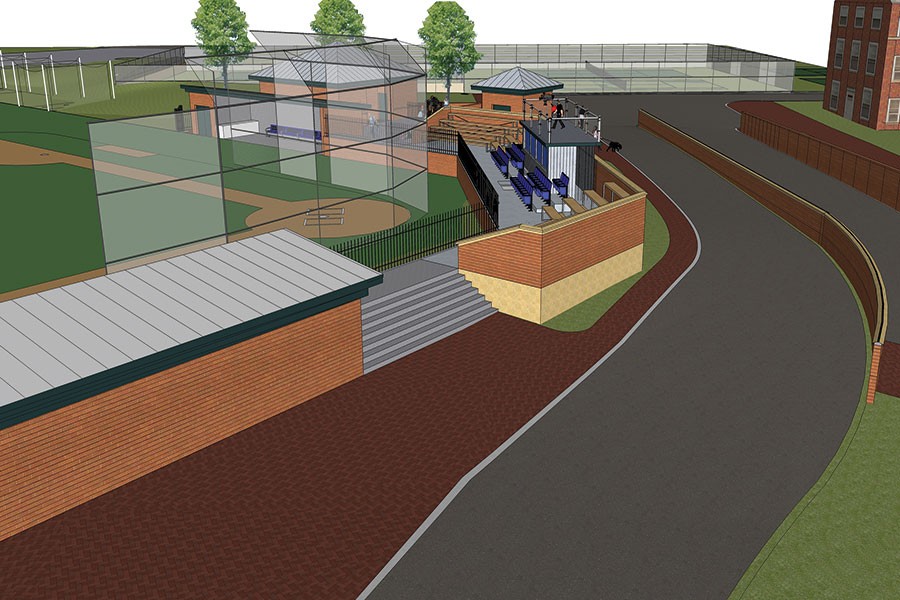 Image caption: When the Blue Jays baseball team starts its 2014 season, its revamped field will include all-weather turf, new dugouts, a 290-seat grandstand, and a plaza with concession stands. Construction and renovations are scheduled to begin late this summer.

A $4.2 million capital campaign by the Johns Hopkins University Department of Athletics is under way to significantly upgrade the baseball field facilities on the Homewood campus.

The initiative is the largest fundraising campaign in program history. Athletic director Tom Calder and Bob Babb, head coach of the highly successful Blue Jays baseball team, have been working closely with Blue Jays Unlimited, the official fundraising arm of Johns Hopkins Athletics, to secure campaign commitments by May 15.

The major facelift of the playing facility, which sits at the corner of University Parkway and North Charles Street, will include an all-weather turf playing surface, new home and visitor dugouts, and the construction of a 290-seat grandstand behind home plate with a modern press box. In addition, a plaza area will be created with rest-rooms, concessions, and storage areas. Other updates include new home and away bullpen areas, batting cages, and backstop and outfield fencing.

Construction and renovations are scheduled to begin late this summer and be completed before the start of the 2014 season. In addition to improving the game-day experience, the facility will provide opportunities not currently available, including live video streaming of games.

Under Babb's guidance, Johns Hopkins has captured 12 Centennial Conference titles, appeared in the NCAA Tournament 18 times, and advanced to the College World Series three times. The Blue Jays played in the 2008 national championship game, and Babb ranks as the fifth-winningest active coach in Division III baseball, with more than 950 wins to his credit.

"The baseball program has grown significantly during my 34 years as head coach. The only area where Hopkins baseball lacks is our field," Babb says. "This baseball capital project will allow our facility to reflect the strength of the JHU baseball program and commemorate its past successes."

Gaudreau Inc., of Baltimore, was the architect for the schematic design phase; KCI Technologies, of Sparks, Md., will provide engineering services and be the design lead for the remainder of the project.