Gabrielle Dean, the curator of modern literary rare books and manuscripts for the Johns Hopkins Sheridan Libraries, listens to objects. She knows that books, magazines, and newspapers can sometimes tell stories other than the ones printed on their pages. 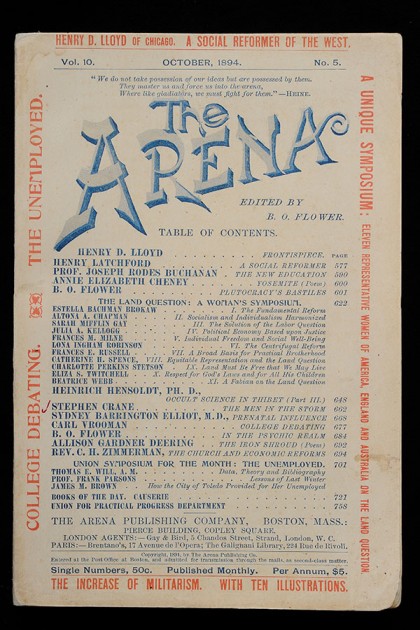 Image caption: The October 1894 issue of The Arena included a piece by Stephen Crane. The magazines cover is one of the images in the online exhibition being prepared by Gabrielle Deans American Literature on Display class.

While putting together For Love or Money: Art, Commerce & Stephen Crane, an exhibition of works from the Wertheim-Frary Collection on view at the George Peabody Library through June 14, she came across a fake newspaper Crane had made. Its stories were informed by an extended camping trip he went on with friends in Pennsylvania in 1894.

The faux newspaper is a lighthearted exception to the grittier fare for which the writer is best known. "He had it printed up, and it's all in-jokes about stuff that happened on the camping trip, and it's awesome," Dean says, laughing. "I don't understand half of it because they're in-jokes, but I love that. It's like somebody's private blog. It speaks directly to the kind of writing that young people might actually do."

For her course American Literature on Display, Dean has been getting nine undergraduates to listen to artifacts' stories, too.

The class explores how the changes during late-19th-century publishing—lower printing costs, the emergence of mass reader markets, newspaper wars—created new content and visual ideas, and how those ideas rippled through culture. "It seemed like a good period to focus on if you want to get undergrads to think about the connections between the inside of the book and the outside of the book," Dean says. "So what we're noticing in the books are themes of performance and spectacularity, theatricality, clothing—a lot about fashion. We're looking at a period of the daily newspaper and the newspaper wars and publishers' bindings and illustrations and half-tone photographs, this way of making the material artifacts of literature more visually present."

The class, offered through the Program in Museums and Society and cross-listed in English, is also an introduction to archival research. Since the beginning of the semester, the students have been using their readings, discussions, and research to write blog posts (americansondisplay.wordpress.com) that offer critical readings of published visual artifacts from, for example, the 1851 World's Fair in London, the Civil War, and urban poverty based on readings of Jacob Riis' How the Other Half Lives.

These posts prepared the students for their semester-ending projects, entries for an online exhibition to complement and contextualize the Crane exhibition.

In late April the class met at the Peabody Library so the students could select the images they wanted to use. Sitting at stately wood desks, they combed through old books and periodicals—the March 1901 issue of The Cosmopolitan, an 1891 issue of Harper's Bazaar, an illustrated edition of Crane's Red Badge of Courage, and a gorgeous book of verse published by fine press publisher William Morris in 1896—resting atop foam wedge book cradles. Smartphones took snapshots of pages, frontispieces, and illustrations. One student looked for scenes of urban street violence. Another found illustrations of women's dress so she could discuss the conflicting notions of femininity: Women were supposed to be prim and proper, yet they wore corsets that accentuated the body.

The students' projects will be grouped into the online exhibition's three sections—The Spectacle of the Street, Bodies on Display, and Visible Technologies—that will be stored in an open-source archive program and will be publicly viewable. It will be called "A Society of Spectacle: American Literature at the Turn of the Twentieth Century."

The digital exhibition will become a snapshot of the publishing era that accelerated the integration of text and visual communication, which contemporary digital publishing has amplified, and Dean sees the class as an opportunity for students to participate in that process. "I find that students are really savvy digital consumers, but they don't often have that many opportunities to be involved in the participation side of digital culture, or they're participating as readers or viewers but not as writers or producers," Dean says. "In a really crude way, [this class is] a form of data visualization: Here's an image of something that I am now going to interpret for you because this is how we communicate now." 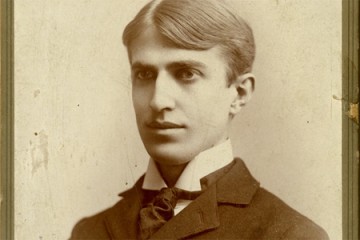 For love or money