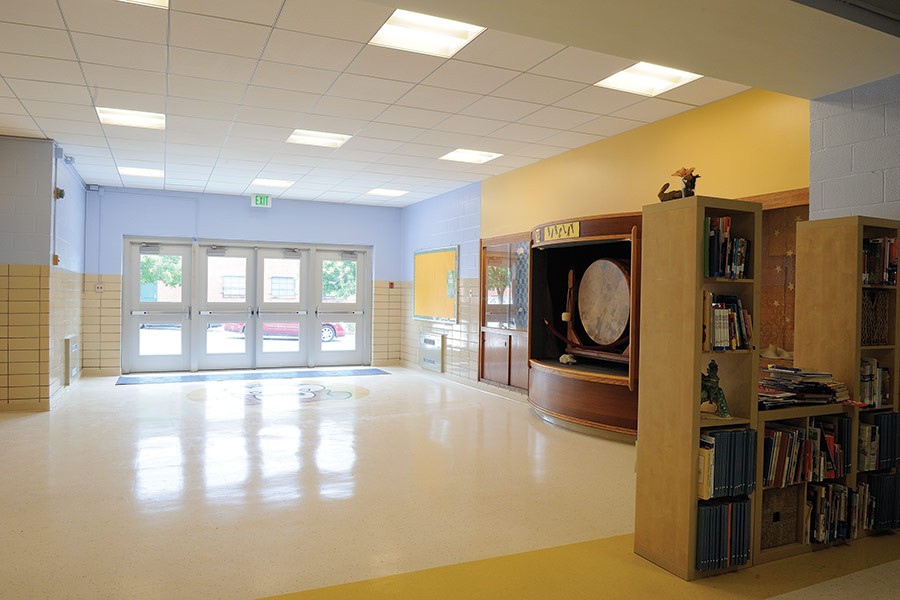 Image caption: Common areas of the Barclay School, above, and the Margaret Brent School were renovated over the summer, thanks to the Homewood Community Partners Initiative. Johns Hopkins donated $800,000 to the project, and Baltimore City Public Schools matched the amount.

With one year now officially under its belt, the Homewood Community Partners Initiative can not only look back on what it has accomplished to date but can look ahead with the benefit of lessons learned.

Andy Frank, special adviser to university President Ronald J. Daniels on economic development issues, says that HCPI and the work accomplished in the first year—which lays much of the groundwork for the five-year project—provided "a lens through which people can look when making decisions" and also that it "uncovered the importance of real estate, and of locating it in a way that strengthens neighborhoods."

In addition, the university proved that by taking the lead in initiatives, others would come aboard.

Roughly $2 million of the $10 million that Johns Hopkins committed to implement HCPI has been spent or committed to date, spread out over several projects.

Johns Hopkins notably entered into contracts with three area partners: Healthy Neighborhoods, Greater Homewood Community Corp., and the Central Baltimore Partnership. "By investing in proven community- and place-based organizations, we are building on the substantial social capital that already exists in these neighborhoods," Frank says.

Over the summer, physical and public improvements were made to two important neighborhood entities: Margaret Brent and Barclay elementary and middle schools. The university donated $800,000 to make renovations to common areas, including cafeterias, entryways, bathrooms, and flooring; the other half of the cost was covered by Baltimore City Public Schools.

"Margaret Brent and Barclay schools have not performed to their potential, but both have wonderful assets on which to build," Frank says.

Johns Hopkins also partnered with Samsung to launch a smart-classroom pilot program for the two schools. This project, which got off the ground in November, has incorporated 21st-century technology into the learning environment through the use of electronic tablets for students and an interactive whiteboard at the front of the classroom.

Another major step forward for Johns Hopkins and HCPI came in joining with MICA to lease 20,000 square feet in the soon-to-be-renovated 10 E. North Avenue and Parkway Theater projects, two historic theaters located south of the Homewood campus in the Station North Arts and Entertainment District. The new space will house a joint undergraduate film program for the two institutions.

The Parkway, which will be the permanent home of the Maryland Film Festival, "will give students access to classroom space, screening rooms, and a main theater," Frank says. "In a small way, Hopkins is creating another campus along the Charles Street spine. Planting a flag in Station North gives us the opportunity to strengthen the Charles Street corridor between Homewood and Peabody, north of North Avenue."

Other year one accomplishments include providing an HCPI grant to support the opening of the 29th Street Recreation Center, increasing Johns Hopkins' Live Near Your Work grants to $27,000 in some HCPI neighborhoods, helping Central Baltimore Partnership obtain a $1.4 million Baltimore Regional Neighborhoods Initiative grant, and securing close to $10 million in matching funds.

The impetus for HCPI grew out of the awareness that the university's Homewood campus is tied to the well-being of its surrounding neighborhoods.

Some of the shared interests for neighborhood improvements that were identified were better schools, safer streets, and more vibrant commercial entities.

Frank notes that the HCPI neighborhoods share a vision of attracting 3,000 new households in 10 years. "Unlike many of the city's most desirable neighborhoods—Federal Hill, Fell's Point, Canton, and Mount Vernon—the HCPI neighborhoods actually want more density," he says. "They have a land use plan in place that takes full advantage of the neighborhoods' access to Penn Station, MARC, Light Rail, and the Charm City Circulator."

HCPI leadership worked with Joe McNeely, a community development consultant and executive director of the Central Baltimore Partnership, to help uncover exactly what was needed by the neighborhoods and one commercial district.

"McNeely was hired to work with the neighborhood representatives, civic leaders, business leaders, institutions, local developers, and city partners within the 10 neighborhoods," Frank says. "This task force identified 29 recommendations through which the HCPI goals could be reached."

While metrics for measuring the success of the HCPI are still being coordinated, private companies have followed in the university's footsteps in providing financial support for this community project.

"The university's $10 million investment allows us to provide, in many instances, the first money in, which is usually the most difficult to secure," Frank says. "Not always, but many investors feel more secure knowing that someone else has already kicked the tires and decided to commit financially. The funds that we have contributed are being used in a positive way, so others are gaining interest in participating."

Frank says that he is optimistic about the remaining four years of the initiative. He is particularly appreciative, he says, of the university leadership's decision to establish a satellite campus in the Station North Arts and Entertainment District. "Look at the benefit to Station North of MICA's North Avenue expansion and vice versa. Yes, locating our joint undergraduate film program on North Avenue is good for the burgeoning arts district, but it also distinguishes the up-and-coming program from its competition in ways that an on-campus location could never do." This, he says, is "one of the best examples to date of shared interests and shared values." 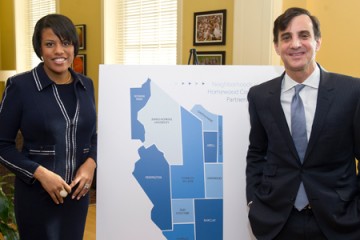 JHU to give $10M to Homewood-area projects

Pitching in on President's Day of Service