JHU to give $10M to Homewood-area projects 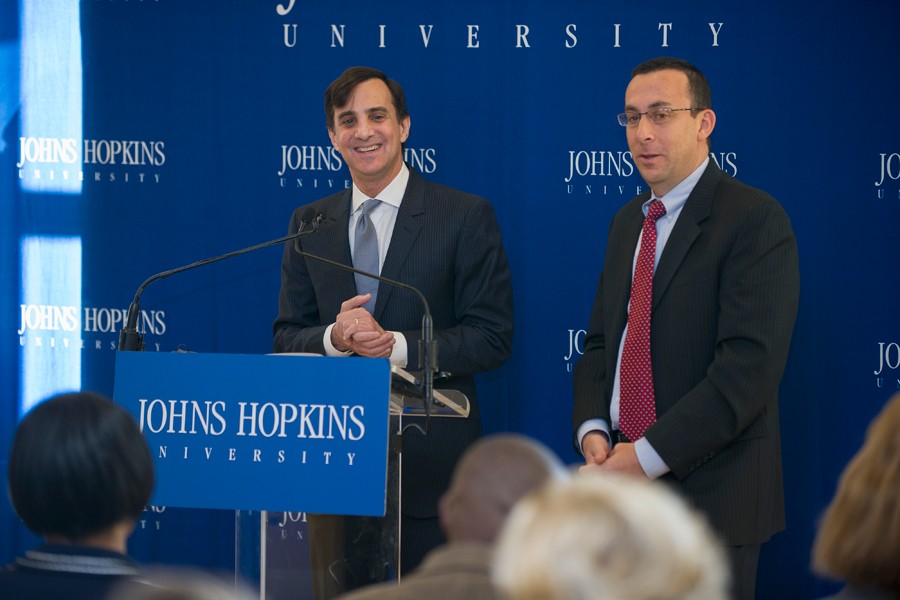 Image caption: President Ronald J. Daniels and Andrew B. Frank, senior advisor to the president on economic development, announce the university's $10 million commitment to neighborhoods near the Homewood campus.

The Johns Hopkins University will contribute $10 million over five years to enhance and strengthen neighborhoods surrounding the university's Homewood campus in northern Baltimore City, President Ronald J. Daniels announced on Dec. 6 at a press conference, where he was joined by Baltimore Mayor Stephanie Rawlings-Blake.

The money will fund projects chosen in conjunction with the neighborhoods themselves and with other members of the Homewood Community Partners Initiative, or HCPI, a collaborative effort convened by Johns Hopkins last year. The university also hopes to attract more funding from other institutions, foundations, and businesses interested in the area surrounding Homewood, roughly from University Parkway south to Penn Station.

Daniels said that the university also will set aggressive new goals for hiring and promoting Baltimore City residents and for making purchases from local businesses and those owned by women and minorities.

"The future of Johns Hopkins is inextricably tied to that of its community, and we are deeply and purposefully committed to Baltimore's success," Daniels said. "The interests of our neighbors—safe streets, the elimination of blighted properties, and development of the local workforce—are also the interests of our university."

Mayor Rawlings-Blake said that the Homewood Community Partners Initiative shows how major institutions such as a university can work with nearby communities to the benefit of all.

"I congratulate the HCPI neighborhoods for coming together with a shared vision," the mayor said. "And I'm grateful to Johns Hopkins for stepping in at a time of scarce federal and state resources to get the communities' effort started and support it financially. I hope that other institutions, businesses, and foundations will also get involved.

"These are wonderful neighborhoods in a great area of our city with the potential to be even better," Rawlings-Blake said. "Their determination to work together and with Johns Hopkins to realize that potential is inspiring. Efforts like this will get us a long way toward my administration's goal of attracting 10,000 new households to Baltimore in 10 years."

HCPI was launched by Johns Hopkins in summer 2011. Since then, the partnership has assessed what it will take to ensure that 10 neighbor communities and one nearby commercial district will thrive. The partnership also focused on how the university, the communities, and other institutions and employers can work together. The study looked closely at five areas: quality of life, housing and residential development, public education, retail and commercial development, and job development through local hiring and purchasing.

The communities involved are Charles Village, Remington, and Wyman Park, immediately surrounding Homewood to the east, south, and west, respectively; Barclay, Charles North, Greenmount West, and Old Goucher to the southeast of campus; and Abell, Harwood, and Oakenshawe to the east, along with the Waverly Main Street business district on Greenmount Avenue.

Daniels said he launched HCPI because of his conviction—a cornerstone of his agenda since he became president of Johns Hopkins in 2009—that the university's health and future are linked to the physical, social, and economic health of the communities where it resides. HCPI conducted more than 100 interviews, met 20 times with neighborhood boards or community resident groups, and conducted surveys and other research. A full-day meeting in January drew more than 100 participants to hear Daniels and experts on university-community partnerships elsewhere in the country, and to brainstorm.

The process resulted in a 93-page report and 29 recommended programs and actions. Addressing everything from promoting mixed-income residential housing, to attracting artists and retail business, to increasing Johns Hopkins' ties with local schools, those recommendations will form the basis for decisions on where to invest the $10 million university contribution. The recommendations are all intended to advance the goals and vision for the area agreed to in the HCPI process:

• A vibrant urban center, growing by 3,000 households in 10 years with exciting new retail businesses and arts, entertainment, and cultural institutions;

• A livable community, with a strong residential market, high-caliber amenities, and quality public schools; and

• Active communities that collaborate with one another, support one another's projects, and together work with Johns Hopkins and other institutions that help anchor the area.

Daniels said that the university also recognizes that it can better use both its role as a major employer and its purchasing power to support the immediate area and the whole city. University officials are working on initiatives to increase employment of city residents above the current 39 percent of the university workforce. Also, they will focus job training and recruitment on neighborhoods around Johns Hopkins campuses and build career advancement programs for local employees.

A parallel effort on outside contracting will include goals for local hiring by construction companies and other contractors, as well as increased university purchases from local and women- and minority-owned businesses. Details on both initiatives will be announced in 2013.

The Homewood campus, located at 3400 N. Charles St., is the base for Johns Hopkins' schools of Arts and Sciences, Engineering, and Education and is also headquarters for the university's central administration. More than 7,000 full-time students study there; many of them live off-campus in the nearby neighborhoods.

The university has a long history of involvement in and with the Homewood-area community. It was, for instance, the moving force behind establishment of Greater Homewood Community Corp., in 1969. Other examples include long-standing financial, institutional, and volunteer support of local public schools and community organizations. The university also has contributed $2.5 million toward a city project to rebuild North Charles Street in the area to make it both more attractive and safer for pedestrians, bicyclists, and drivers. 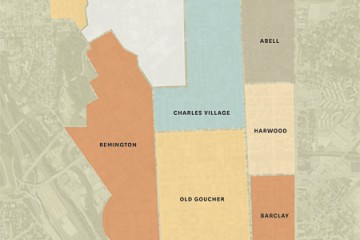