Rising to the Challenge campaign halfway to $4.5 billion goal

The Johns Hopkins Rising to the Challenge campaign is halfway to its goal of raising $4.5 billion to foster discovery and scholarship, advance health, identify innovative solutions to global problems, and bolster support for faculty and students.

Gifts and pledges to the campaign from more than 162,000 donors passed $2.25 billion—the 50 percent mark—in early November, according to university President Ronald J. Daniels.

"This is a significant milestone on a journey to realize our vision of what Johns Hopkins can be and what it can do for humanity," Daniels says. "We are grateful that so many thousands of benefactors share that vision with our faculty, physicians, students, caregivers, and staff."

Rising to the Challenge: The Campaign for Johns Hopkins is the largest-ever fundraising effort undertaken by the university and its sister institution, the Johns Hopkins Hospital and Health System. Campaign planners had originally expected not to reach 50 percent of the goal until spring 2014. So far, donors have endowed 94 professorships and designated $190 million for undergraduate and graduate student aid.

"Each gift, no matter its size, contributes significantly to the work of our faculty, students, and health professionals, and to our efforts to use knowledge to make the world a better place," says Paul Rothman, the Frances Watt Baker, M.D., and Lenox D. Baker Jr., M.D., Dean of the Medical Faculty and CEO of Johns Hopkins Medicine.

The largest gift ever to Johns Hopkins, $350 million from philanthropist and New York City Mayor Michael R. Bloomberg, a 1964 graduate, was announced in January and is part of the campaign. That gift includes $100 million for student aid; the rest will endow 50 Bloomberg Distinguished Professors promoting collaboration on important questions that cross traditional academic disciplines.

"If there is an issue in the world you are passionate about, chances are Johns Hopkins is working on it," says Charles I. Clarvit, a university trustee, 1978 graduate, and co-chair of Rising to the Challenge. "From cancer and medical research of all types, to undergraduate scholarships for deserving students in Baltimore and beyond, to research into the origins of the universe, this campaign touches on just about every aspect of humanity that you can imagine."

The Science of Learning Institute, one of the campaign's "signature" interdisciplinary initiatives, has attracted a $20 million contribution and a number of other gifts for a total of $37.1 million. The institute is bringing together neuroscientists, cognitive scientists, geneticists, computer scientists, and education experts to better understand how people learn, to improve teaching and learning, and to help transform education. It is already funding research projects, including an investigation of genetic contributions to learning ability.

Three additional signature initiatives have faculty directors on board and are ramping up both operations and fundraising: Individualized Health, to promote customized health care; the Institute for Water, a project focused on clean water, public health, and disaster response; and the Global Health Initiative, which will attack the world's most complex and intractable health problems—such as HIV, diabetes, and malaria—through a broad multidisciplinary approach.

The campaign's final signature initiative, the Institute for the American City, perhaps the most interdisciplinary of the five, will pull together faculty, staff, and students from 10 Johns Hopkins units. It aims to help revitalize urban centers through research and programs that foster economic growth, improve schools, reduce crime, address health issues, and cultivate the arts.

"I'm an alumna, parent, and trustee of Johns Hopkins, and I am extremely proud to be co-chairing a campaign that has already inspired more than 160,000 people to give," says Heather H. Murren, the campaign's other co-chair and a 1988 graduate. "We're halfway to our very ambitious campaign goal, and that is a cause to celebrate. But Johns Hopkins always strives to do more, and we will make sure that the continued success of this campaign is felt in our local communities, in Baltimore, and across the nation and the world."

The campaign began its "quiet phase" in January 2010. By the time it was launched publicly in early May, there were commitments of $1.94 billion, or 43 percent of the goal, from more than 150,000 donors. In the six months since then, another $310 million has been given or pledged. The campaign is targeted for completion in 2017.

"I am constantly amazed by and so grateful for the dedication of our friends and alumni to the mission of Johns Hopkins," says Fritz Schroeder, vice president for development and alumni relations. "There is much left to do over the next four years, but this is a moment worth celebrating." 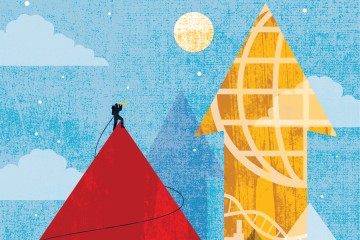 Johns Hopkins is rising to the challenge to raise $4.5B