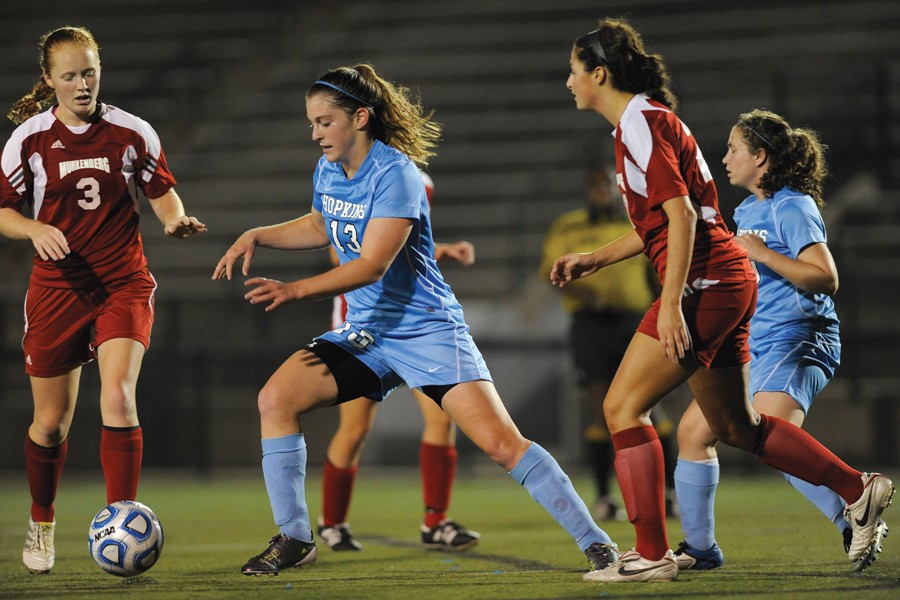 Image caption: Heading into her junior year, Hannah Kronick ranks third all-time at Johns Hopkins in goals (43) and second all-time in assists (19) and points (105). At her current rate, Kronick will sit atop the list of every offensive category in the women's soccer team record book by the time she graduates.

During the playing of the national anthem before each game, Hannah Kronick clears her head and focuses in on goal. The Blue Jays forward visualizes scoring from all angles: a header to the top right, a slotted kick past a diving keeper. Every imaginary shot hits the back of the net.

Wishful thinking? Sure. But Kronick more often than not makes these phantom scores a reality.

At her current rate, Kronick will sit atop the list of every offensive category in the women's soccer team record book.

She's been a big part of the Blue Jays' success in recent years. In 2011, Kronick's freshman year, the team went an incredible 22-1-0, won the Centennial Conference championship, and made it to the NCAA Sweet 16. Last year, she helped lead Johns Hopkins to an 18-5-1 record and a trip to the NCAA Elite Eight.

Of course, with on-the-field success comes a net full of accolades. Last year, she earned All-America honors from both D3soccer.com and the NSCAA, and the ECAC tapped her as Co-Offensive Player of the Year.

Kronick, who wears the No. 13 jersey and sports a long ponytail on the pitch, made an instant impact at Johns Hopkins. In the opening weeks of training in her freshman year, Kronick was given the chance to play with the starting 11 in a scrimmage and impressed the coaches enough that they kept her with that squad.

"I was able to hang with [the veterans] and showed that I could play," says Kronick, an international studies major.

Head Coach Leo Weil would eventually place her in the team's starting 11, and she repaid his faith.

At 5 feet 8 inches, Kronick is tall but certainly not towering. What she does have are speed and strength, the byproducts of 11 years of gymnastics and two years of track.

Kronick started playing soccer at age 3 but says she didn't "get serious" with the sport until she joined a premier select club team in the seventh grade. She further developed a love and passion for the game in high school. She was the only freshman to make the varsity team, and was plugged into the forward position.

"I always loved being on offense, and scoring," she says.

In high school, Kronick was team captain and tallied 42 goals and 37 assists throughout her career. She made All-State, All-Conference, and first team All-County in her senior year.

Kronick says that the turning point for her game came during her junior year of high school, when a new varsity head coach helped nurture her mental toughness, leadership, and technical skills.

"He told me if you're not scoring goals, you're not doing your job," she says. "And he taught me to take a more critical look at my play each game and practice, and to always take a step back and evaluate myself."

She also worked with a Brazilian soccer trainer on finishing and improving her touch. "We practiced one-touches inside the six-yard box. Just learning how to be very accurate and finishing," she says.

Although Kronick can hit a powerful and accurate long shot, she says she's best in the box. She models her game somewhat after Alex Morgan, the star of the U.S. women's national team.

"I like that type of player. Someone with speed who is good at finishing, especially in very close. She's incredible," she says.

When asked about her record-breaking pace at Johns Hopkins, Kronick admits it's "cool" to have made such an impact in just two years.

"I've worked hard for this, and now it's all happening," she says. "But none of the records really matter. I don't focus on how many goals I want to get; what's more important to me is winning."

Coach Weil describes Kronick as a "great athlete," physically strong with above-average speed. "But what sets her apart is her ability to position herself perfectly to set up goal-scoring opportunities for herself and others," he says. "She's also an extremely hard worker, hard on herself like most Johns Hopkins students. She's also very humble. She's quiet, unassuming, a great leader by example because of her ability and work ethic."

Kronick says she's eagerly awaiting the upcoming season. This summer, in addition to interning at Major League Soccer's headquarters in New York, she hit the weight room to add more strength and speed. She also played for Jersey Blues FC, the reserve club for Sky Blue FC of the National Women's Soccer League. Kronick says she's in the best shape of her career, and that the team is primed for more success.

"We only lost two starters, which is not that much, considering. And we have 12 talented freshmen coming in plus two transfers," she says. "Our main goal this year is to win the national championship—and I really believe we can."

If she can visualize it, it can happen.