Event will showcase 34 shorts plus one feature, six documentaries, and three repertory screenings

On that oddly anticlimactic snow day in early March when classes were suspended, Gilman Hall is ghost-town quiet, and the long sigh that John Wedemeyer lets out nearly fills the entire building. He takes a seat in one of Memorial Hall's big comfy chairs and assumes the position—legs crossed, a hand to the temple—of a guy with an occupied mind. Yes, as a Class of 2013 double major in Film and Media Studies and the Writing Seminars, he's graduating in May and, no, he's not entirely sure what he's doing after that. But that's not what's weighing on him. 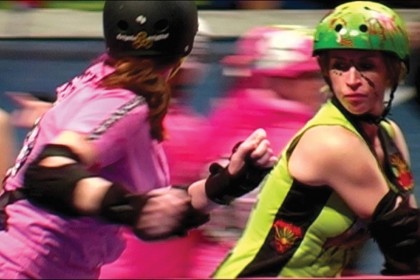 Image caption: "Leave It on the Track," a documentary about roller derbies, is one of 44 full-length and short films that will be shown at the Hopkins Film Festival this year.

In his freshman year, Wedemeyer got involved with the Hopkins Film Festival, an event curated and run by students that has taken place every spring since 1999. Now co-director of the festival with junior Abby Harri, Wedemeyer knows everything that needs to be done prior to the festival's run over Spring Fair weekend, April 12 to 14, in Homewood's Shriver Hall. Advertising and marketing materials have to be approved, printed, and distributed. Figuring out who is working which screenings has to be slated. And having a final schedule makes both easier.

More than 200 films were submitted, and in early March the organizers had whittled those down to 41 and three repertory films. The previous weekend had been their March madness: programming. "This past weekend was actually 48 hours of sitting in my apartment and being, like, This is all the time that we have," Wedemeyer says. "How can we use it? Do we have a lot of this kind of film? Do we have a lot of this?"

The call the festival put out was open, not focusing on any genre or format. "We're mostly just looking for great films."

It's a search for quality that Wedemeyer says he's witnessed become better and better every year. "Usually it's sort of a difficulty finding things that we really love to show," he says, recalling that in his sophomore year, about 23 submissions were received. Last year the festival started using the online submission system withoutabox.com, which broadened its reach.

"We have films come from Japan, London, countries in the Middle East," Wedemeyer says. "This year we got the ones we definitely wanted to show, and then we realized we didn't have enough time for everything, which is a great problem to have."

Most of those are shorts—34 in all. "There's this idea now that it's better to make a great short to get noticed than it is to make a feature that nobody will watch," Wedemeyer says, alluding to the robust short submissions. "So you have people pumping as much money as they would put into an indie feature into a 12-15 short film. So you get these really highly produced, wonderful-looking short films, and certain festivals just don't show as many shorts as they used to, which I think is kind of a shame. Smaller festivals are outlets for these filmmakers to get seen."

One is Xico + Xana, a submission from Portugal that Wedemeyer fell in love with. "It's this sweet, 15-20-minute short that centers around this amazing performance from a 6-year-old boy who is fantastic," he says. "I tend to like to find things that I never in a million years would've been able to see if I wasn't working for this festival. So that's what I get excited about, when I throw something in, and it just blows me away. And I was just really, really impressed with the films we got this year."

For a schedule and ticket prices (free for Hopkins affiliates), go to http://jhufilmfest.com.

The country from which Xico + Xana originates was misidentified in an earlier version of this article. 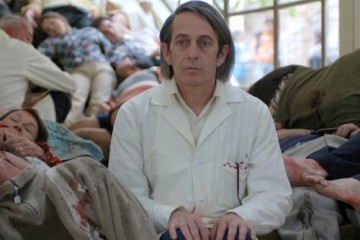