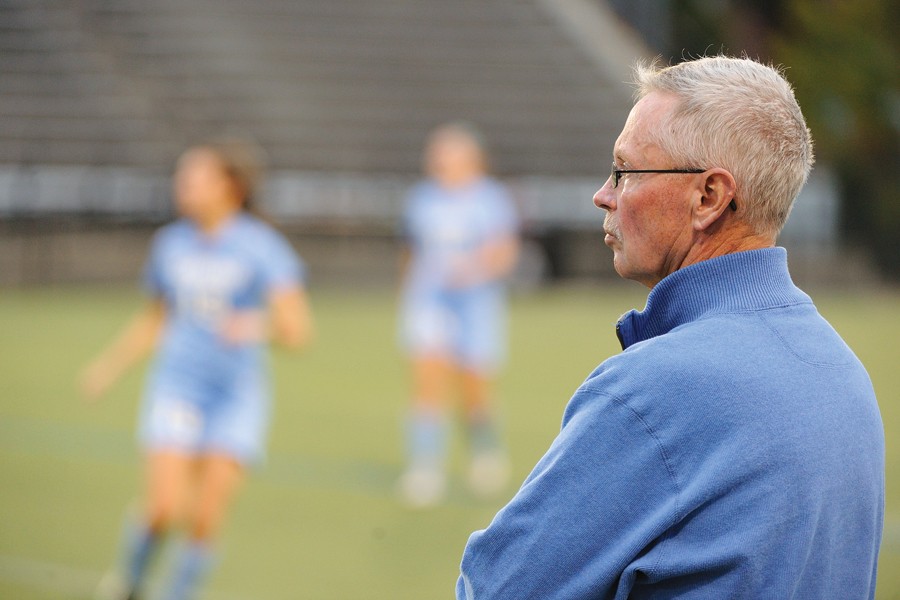 Image caption: A man of few words, Leo Weil is the calm at the center of a success-laden program that he has built from scratch.

In the first half of a home contest this season vs. Washington College, the Johns Hopkins women's soccer team squandered several breakaway chances. Players fired shots too close to the goalie. Some simply lost possession with no defenders between them and the goal. Balls bounced off the woodwork.

While the action was taking place, the Blue Jays' head coach, Leo Weil, stood on the sideline unobtrusively, positioned closer to the scorer's table than to the team's bench. He seemed confined to an invisible box and barely lifted an eyebrow at each near miss.

The second half of the game proved a different story. JHU took advantage of its chances en route to a comfortable 4-0 win.

Coach Weil's demeanor, however, remained the same. Going by expression alone, you might think the team had just lost its fourth straight.

Described by others as a man of few words, Weil often stands on an emotion-free island, the calm at the center of a success-laden program that he has built from scratch.

Now in his 21st season as head coach, Weil has established a winning tradition that few could critique. Under his watch, the program has a .725 winning percentage (268-93-28), eight Centennial Conference tournament titles, 16 consecutive winning seasons, and 10 NCAA tournament appearances.

The two-time Centennial Conference Coach of the Year led the team to its best season in 2011, a 21-1 ride to the NCAA Sweet 16.

On the eve of another November tournament run, Weil took time to reflect on a season hampered by injuries to key players, the premature end to a magical 2011 season, and his approach to coaching and recruiting.

"I never thought I'd get a chance to coach in the college ranks," Weil says. "I was happy where I was, but I thought I'd give it a shot, and I never looked back."

Not surprisingly, the team weathered some growing pains, winning just 14 games in its first four years.

"Even though we didn't win a lot of games those first few years, I always enjoyed being around those players," he says. "That first year in particular was interesting because I had no idea what our team would be like or what the talent level was for other teams. It was all new."

The women's soccer team had its breakout year in 1996, winning the Centennial Conference. The Blue Jays made the NCAA tournament the next year.

Weil, who earned his bachelor's, master's, and advanced graduate specialist degrees in psychology from the University of Maryland, College Park, continued to work as a school psychologist, which meant leaving work early to drive to games hours away. In a hectic schedule, he found time to attend club camps to find the talent needed to compete with upper echelon teams.

"One of the first decisions I had to make was whether it was worth my time recruiting heavily or just going with what I got," says Weil, a soccer junkie who watches the elite European teams on TV whenever he can. "I decided to get out as much I could, and it paid off."

The last four years have been particularly rewarding, with record-breaking win totals and the team advancing twice to the Elite Eight.

The stars seemed to align for a title run last year. The team finished the regular season 17-0, the first perfect season in the program's history, and ranked No. 4 in the nation. After relatively easy victories in the first two rounds, Johns Hopkins faced Amherst in the Sweet 16 with Division III juggernaut Messiah, the tournament's No. 1 seed, looming in the next round.

The Blue Jays lost 2-0 to Amherst, a heartbreaking defeat that left the team wondering what could have been.

"Last year was very frustrating at the end," Weil says. "It was our best team ever. I think we got caught looking ahead a little bit. I know the players were looking forward to playing Messiah, and we were not prepared as we should be to play Amherst. It was a hard lesson to learn for all of us."

Despite losing All-American Erica Suter and several other key players to graduation, the team entered the 2012 season with high hopes and title aspirations. The injury bug bit early, however. Within the course of a few weeks, the team lost three starters to season-ending injuries, with several others missing playing time due to various ailments, from twisted ankles to concussions.

"It's been frustrating, no doubt. But what are you going to do?" Weil says. "The underclassmen and bench players have had to step up, and they've done a great job."

As of press time, the team had a 12-3-1 record, with sophomore phenom Hannah Kronick leading the way with 19 goals, on pace to break the single-season goal record.

Despite this year's roster upheaval and misfortunes, Weil has remained as grounded as ever.

"He watches a lot of film and prepares us for matches, but he's a man of few words," Vranis says. "He trusts us and lets us play, but he'll let you know if he notices something, like, 'Pam, you should have done this, or be aware of this option.' He makes his point and then moves on."

Weil says that the two "polar opposites" complement each other well.

"Part of my philosophy is that I've said all that needs to be said leading up to the game. Tim is much more vocal than me, and I don't want the kids getting mixed messages or the both of us talking too much, so I let Tim do his thing," Weil says. "He has a world of experience and knowledge, and I try to utilize that. Ultimately, I want what is best for the team, so I put my ego aside. We've had four of our best years with Tim working for us, which is no coincidence. The kids love him."

Senior goalkeeper Meredith Maguire says that while Wittman is direct, Weil is an observer who lets players figure things out for themselves.

"He recruits really well and brings in a lot of talented and smart players. We know what we have to do out there," Maguire says. "He's also a good listener. If you have an issue or suggestion, he always has open ears."

Weil agrees with the description of his mostly hands-off coaching style.

"I want our players to make decisions on the field. If we need to make corrections, we'll certainly do that. But when you've done a good job of preparing them, things can take care of themselves."

To reward players for good performance, Weil places a "212" sticker on the individual's locker, a reference to the temperature at which water boils. Weil likes the symbolism of giving that extra degree to make things happen.

Even the reserved Weil has had to give the extra degree this year. Earlier in the season, he called several team meetings to address the injuries and not let the players' morale drop.

"I told them, Don't let this season go to waste," he says. "We can still accomplish our goals. If we work super hard in practice and take every game one at a time, we have a lot in front of us to shoot for."

Tournament time begins this week, and the 2012 Blue Jays are hoping for a run of matchups that lasts well into the month.