Sophomore named player of the year after leading league with 22 goals, 7 assists; coach recognized for guiding Blue Jays to 15-4-1 mark

Johns Hopkins sophomore Hannah Kronick and coach Leo Weil were honored by the Centennial Conference on Tuesday as the league's women's soccer player and coach of the year, respectively.

Kronick is the third Blue Jay to garner player of the year recognition in the past four years. She led the league in goals (22) and assists (7). 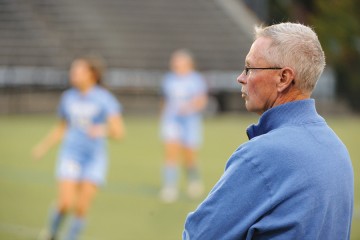 Published Nov 2012
A man of few words, Leo Weil is the calm at the center of a successful program that he has built from scratch / Gazette