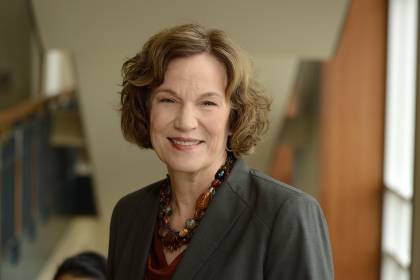 Jacquelyn Campbell is a national leader in research and advocacy in the field of domestic violence or intimate partner violence. She has worked for 30 years with victims of domestic abuse and developed research on risk assessment for lethal and non-lethal domestic violence, justice and health care system response, and the warning signs that could potentially indicate violence.

Campbell developed the widely used Danger Assessment, which helps to determine the level of danger an abused women is in and the likelihood of being killed by her intimate partner. Campbell has testified before Congress on gun control measures in relation to domestic violence and worked with police departments and first responders in handling domestic violence calls.

She has authored or co-authored more than 230 publications and seven books on violence and health outcomes. Her studies paved the way for a growing body of interdisciplinary investigations by researchers in the disciplines of nursing, medicine, and public health. Her expertise is frequently sought by national and international policy makers in exploring intimate partner violence and its health effects on families and communities. Part of the congressionally appointed U.S. Department of Defense Task Force on Domestic Violence, she is also a Living Legend of the American Academy of Nursing.

“It Was the End of the World as I Knew It”