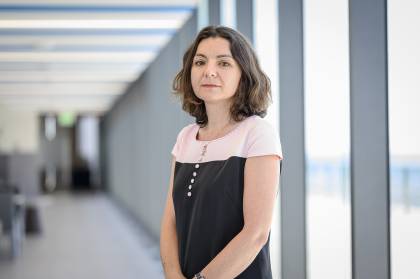 Emilia Simeonova is a professor at the Carey Business School whose research focuses on the economics of health care delivery, racial disparities in health outcomes, the long-term effects of shocks to children's health, and the intergenerational transmission of health. She also studies patient adherence to therapy and the interaction between physicians and patients.

Simeonova examines the connection between poverty and ill health by asking whether people of limited means are more likely to be unhealthy because they're poor, or are they poor because they're unhealthy? Her research has been funded by the National Institutes of Health, the National Science Foundation, the Swedish Research Council and the Danish Academy of Sciences.

Media outlets featured research by Simeonova and her colleagues showing that a congestion tax in Stockholm cut air pollution in the city center and reduced childhood asthma cases by nearly 50 percent. The research also found that such a tax could dramatically reduce pollution in U.S. cities. She was also quoted in an article in The Atlantic that featured research showing that even small boosts in family income can improve the long-term mental health of children living in poverty.