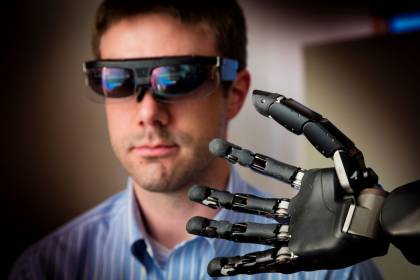 He is the Applied Physics Lab project manager on the Machine Intelligence from Cortical Networks project as well as multiple collaborative pre-clinical studies with the JHU Hospital that involve brain-control of APL's Modular Prosthetic Limb and clinical evaluation of rehabilitative technologies, including the Hybrid Augmented Reality Multimodal Neural Integration Environment system.

He is the vice chair of the Applied Biomedical Engineering program at JHU. Prior to joining APL, Brock was the co-founder and chief technology officer of NanoGrip Technologies, which developed and commercially produced multiple-degree-of-freedom micromanipulation tools for micro-assembly, mechanical testing, and biological interfacing.