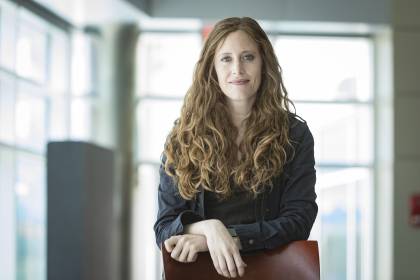 Brett Denevi is a planetary geologist who has specialized in studies of the moon, the planet Mercury, and asteroids. She's an expert on the origin, composition and evolution of planetary surfaces, focusing on volcanoes and crust formation on terrestrial bodies, the mineralogy and chemistry of planet surfaces, and space-weathering effects on airless bodies.

Denevi also works on space instrumentation, and serves as deputy principal investigator for the main camera on NASA's Lunar Reconnaissance Orbiter. Asteroid 9026 Denevi was named in her honor.

She is the recipient of the 2015 Maryland Academy of Science outstanding young scientist award, a NASA Early Career Fellowship, and seven NASA group achievement awards. Denevi has been involved in NASA mission and instrument teams at all phases and in roles that include Deputy PI (Lunar Reconnaissance Orbiter Camera), Deputy Instrument Scientist (Mercury Dual Imaging System, MESSENGER), Participating Scientist (Dawn), and Co-I (ShadowCam, Korean Pathfinder Lunar Orbiter). She has worked on laboratory and in-flight calibration of multiple flight instruments, and is experienced in operations, planning, and targeting (LROC, MESSENGER).