Read, too, about Guggenheim fellows, NAS members, and other faculty recognitions

Martha Jones, the Society of Black Alumni Presidential Professor and professor of history, has won the 2019 Liberty Legacy Foundation Award for her book Birthright Citizens: A History of Race and Rights in Antebellum America, published by Cambridge University Press. 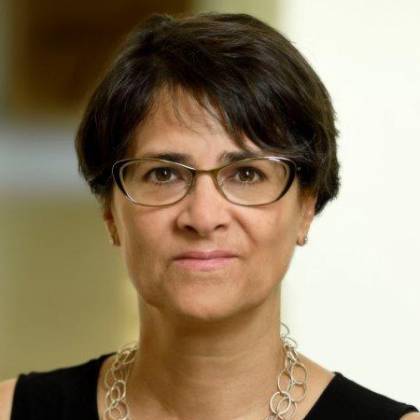 The Organization of American Historians awards this prize annually "to the author of the best book by a historian on the civil rights struggle from the beginnings of the nation to the present," according to the OAH website.

More from the Krieger School

Laurence Ball's book The Fed and Lehman Brothers: Setting the Record Straight on a Financial Disaster was selected as one of the Best Books of 2018: Economics by the Financial Times. He is a professor in and chair of the Department of Economics.

Veena Das, a Krieger-Eisenhower Professor, and Naveeda Khan, an associate professor of anthropology, received a 2019–21 Sawyer Seminar grant from the Andrew Mellon Foundation to hold an extended conversation at Johns Hopkins on "Precision and Uncertainty in a World of Data."

Aaron Hyman, an assistant professor in History of Art, has been awarded the Association of Print Scholars 2018 Publication Grant to support a forthcoming publication titled "Washing the Archive: Indigenous Knowledge, European Prints, and Colonial Histories of Latin America."

Mark Kamionkowski, a professor in Physics and Astronomy, and Robert Moffitt, a professor in Economics, have been named to the National Academy of Sciences, a distinction that recognizes excellence in Science. Kamionkoski, a theoretical physicist, specializes in cosmology and particle physics, and his research focuses primarily on particle dark matter, inflation and the cosmic microwave background, and cosmic acceleration. Moffitt is an expert in labor economics and applied microeconomics whose research focuses on issues relating to the low-income population in the U.S. Read more on the Hub.

Thomas Kempa, an assistant professor of chemistry, received a National Science Foundation CAREER award, its most prestigious honor. The award provides five years of funding to support the research and educational goals of early career faculty.

Michael Levien, an assistant professor of sociology, was awarded a senior research fellowship from the American Institute of Indian Studies for his project titled Land Mafias in Liberalizing India.

Alice McDermott, who holds the Richard A. Macksey Professorship for Distinguished Teaching in the Humanities, has been awarded the Prix Femina, France's award for the best foreign novel of the year, for her book The Ninth Hour. Established in 1904, the Prix Femina is awarded to the best French and foreign novels.

Mitchell Merback has been named to the Arnell and Everett Land Professorship in the History of Art Department.

Matthew Porterfield and Lawrence Jackson have been named 2019 Guggenheim Fellows, a prestigious distinction that recognizes achievements and exceptional promise. They are among a group of 168 scholars, artists, and writers selected from nearly 3,000 applicants. Porterfield is a lecturer in the Program in Film and Media Studies, where he teaches courses in film production and theory. His most recent feature film, Sollers Point, won the top jury prize for an American independent feature at the 2018 Champs-Élysées Film Festival in Paris. Jackson, a Bloomberg Distinguished Professor who teaches in the departments of English and History, is an expert in 20th century African-American literary history, and his book Chester B. Himes: A Biography was a finalist for the Pen/Faulkner award. (Read more on the Hub.) In addition Porterfield's Sollers Point appeared in lists of the best movies of 2018 in Vanity Fair and The New Yorker.