Marc Kamionkowski, Robert Moffitt, and Cynthia Wolberger are among 125 honored for their excellence in science

Three Johns Hopkins University faculty members were named today to the National Academy of Sciences, a distinction that recognizes excellence in science. Theoretical physicist Marc Kamionkowski, economist Robert Moffitt, and structural biologist Cynthia Wolberger are among 100 new members and 25 foreign associates to be selected for membership this year. 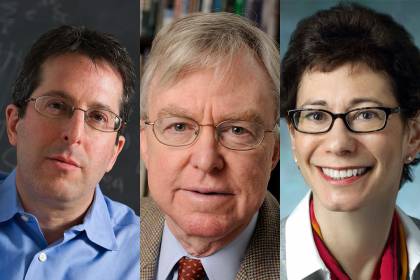 Kamionkowski, a professor in the Department of Physics and Astronomy in JHU's Krieger School of Arts and Sciences, specializes in cosmology and particle physics. His research focuses primarily on particle dark matter, inflation and the cosmic microwave background, and cosmic acceleration. He has also worked on neutrino and nuclear physics and astrophysics. Kamionkowski was elected to the American Association for the Advancement of Science in 2017 and received a Johns Hopkins Discovery Award in 2018.

Moffitt is an expert in labor economics and applied microeconometrics whose research focuses on issues relating to the low-income population in the U.S. As a professor in the Department of Economics in the Krieger School, he leads research into the labor supply decisions made by female heads of family and how they interact with the U.S. welfare system; the income tax system; and social insurance programs such as Social Security, unemployment insurance, and disability insurance. He has been a national associate of the National Academy of Sciences since 2001 and in February joined a group of 14 other subject matter experts in coauthoring a report released by the National Academies that outlines a path for reducing child poverty in the U.S. by as much as 50 percent.

Wolberger, a professor of biophysics and biophysical chemistry at the Johns Hopkins University School of Medicine, studies proteins that pack DNA into a bundle within a cell and how special tags, called ubiquitins, are attached to these proteins and help turn genes on or off. She develops 3D models to study in much finer detail the cellular machinery that controls DNA packaging, revealing how the process may go awry in human disease and potential pathways to develop drugs that can correct the process. She was recently elected to the American Academy of Arts and Sciences.