Johns Hopkins University faculty members Lawrence Jackson and Matthew Porterfield have been named 2019 Guggenheim Fellows, a prestigious distinction that recognizes achievements and exceptional promise. They are among a group of 168 scholars, artists, and writers selected from nearly 3,000 applicants. 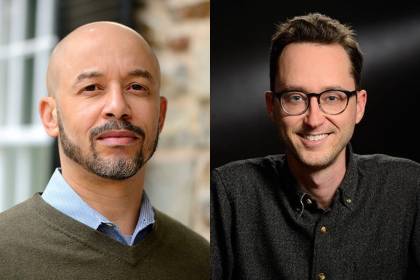 Jackson, a Bloomberg Distinguished Professor who teaches in the departments of English and history, received a fellowship in the field of general nonfiction. He is an expert in 20th century African-American literary history, and his book Chester B. Himes: A Biography was a finalist for the Pen/Faulkner award. A Baltimore native, he founded and directs the Billie Holiday Project for Liberation Arts, which aims to foster the robust intellectual and artistic exchange between members of the university's Homewood campus and historic Baltimore neighborhoods. The Guggenheim Fellowship will support Jackson's development of a monograph project entitled Christmas in Baltimore.

Porterfield is a lecturer in the Program in Film and Media Studies, where he teaches courses in film production and theory. Also a native of Baltimore, Porterfield has written and directed four feature films, including most recently Sollers Point, an intimate portrait of working-class life in the Baltimore suburb of Dundalk. The film won the top jury prize for an American independent feature at the 2018 Champs-Élysées Film Festival in Paris. Porterfield was recognized with a Guggenheim Fellowship in the field of film and video.

The John Simon Guggenheim Memorial Foundation was founded in 1925 by U.S. Sen. Simon Guggenheim and his wife as a memorial to their son. Fellowships assist scholars and artists in pursuing research in any field of knowledge or arts.

Since its founding, the Guggenheim Foundation has granted more than $360 million in fellowships to more than 18,000 individuals. Recent winners with Johns Hopkins ties include Peabody faculty member Oscar Bettison and alums Stefan-Ludwig Hoffmann and Deborah Rudacille, who were recognized in 2017; art historian Mitchell B. Merback, who won in 2016; and anthropologist Niloofar Haeri and chemist and science historian Lawrence M. Principe, who won in 2015.