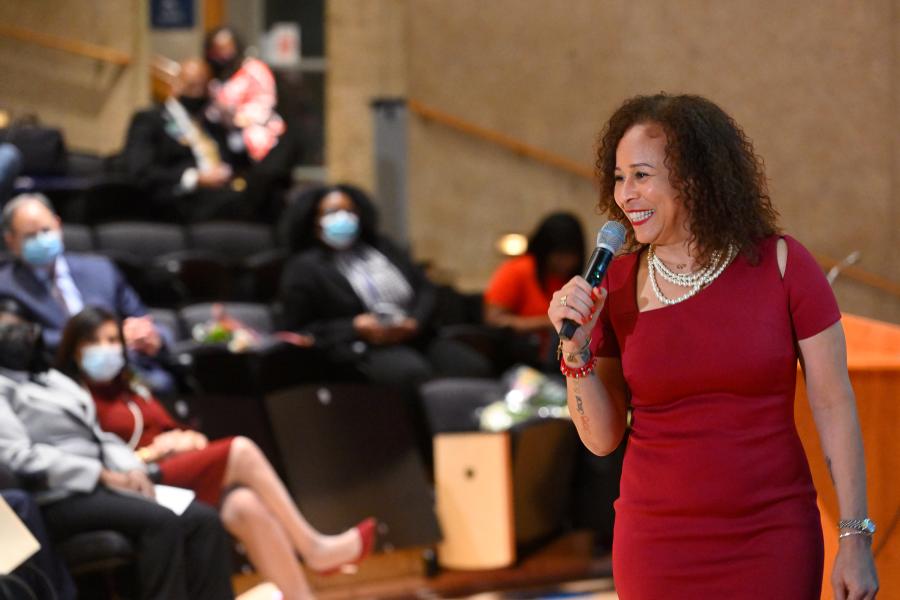 'Be the hero in your own story,' trailblazing NFL coach says in MLK Jr. Commemoration keynote

"Can you believe that?" is what Collette V. Smith asked her father when she was invited to work for the New York Jets in 2017—becoming not only the team's first female coach, but also the first Black female coach in the NFL's history.

Delivering a keynote address at Johns Hopkins' 2023 celebration of the life and legacy of Martin Luther King Jr., Smith said she still gets goosebumps over her father's response. He told her, "Collette, I can believe it. I'd be more proud of you if you believed it."

"Be the hero in your own story. ... Change does not roll in on the wheels of inevitability, but comes through continuous struggle."
Collette V. Smith

As a child with a passion for football, Smith said she felt "insignificant and overlooked" as she was barred from the sport due to her gender. Later, in her early 40s, she got the chance to try out for the Sharks, a women's pro-football team in New York City. Initially skeptical of her chances, she said, "I got out there and I turned into somebody I didn't recognize—that was the strong Black woman that was being oppressed by me, by myself. Sometimes we keep ourselves down. I was drinking the tea from the world. So I went out there and I made that team and I am very proud of that woman."

After later landing the coaching position with the Jets, Smith founded Believe N You Inc., an organization that aims to empower young girls in underserved and low-income communities, offering college-readiness and motivational workshops and scholarships to HBCUs.

"Be the hero in your own story. Own your unique flavor. Own who you are," Smith told the crowd gathered at Turner Auditorium on Friday, adding: "Challenge yourself. Change does not roll in on the wheels of inevitability, but comes through continuous struggle."

Friday's event marked the 41st annual commemoration at Hopkins honoring the life and legacy of Dr. King—a tradition started by Hopkins surgeon Levi Watkins, renowned for both his medical and civil rights accomplishments. It was also the first time the event has taken place in person in three years, in the wake of the COVID-19 pandemic. 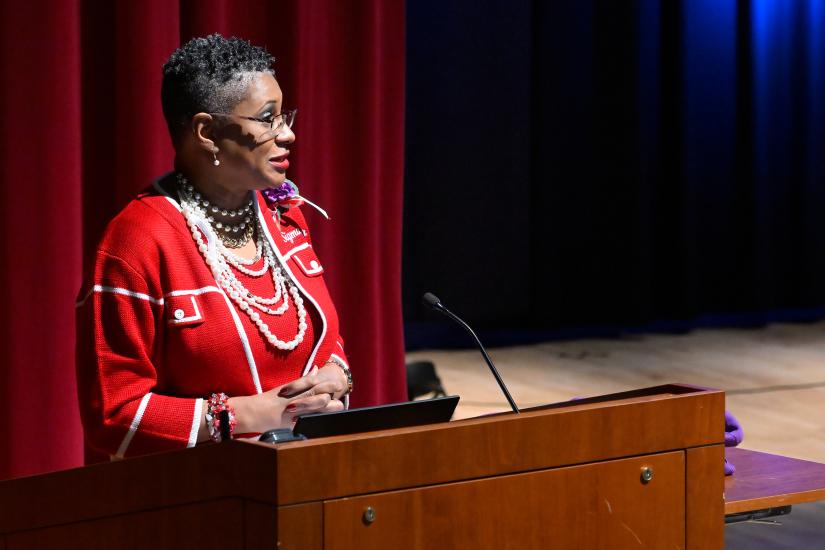 Pointing to the theme of this year's event, "A Purpose Greater Than Ourselves," Sherita Hill Golden, vice president and chief diversity officer for Johns Hopkins Medicine, looked to the way Johns Hopkins University and Medicine responded over the past three years.

"During the pandemic I watched as our health care providers and frontline staff, doctors, nurses, technicians, environmental services, patient transport, dietary and public safety, risk your own lives to care for our patients with COVID even when you didn't understand the dangers that lie ahead," Hill said. "During a very dark time, I watched as you gracefully navigated tough conversations about the lived experiences of our diverse employees in the days and weeks that followed the murders of George Floyd and the Asian workers at the spa in Atlanta. And I watched as you shared, poetry, music, and art for our Hopkins community, as we have slowly emerged from the pandemic during last year." 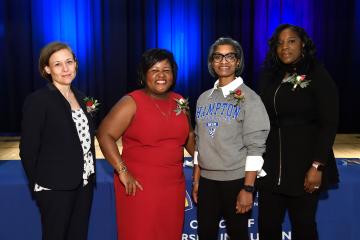 Published Jan 13, 2023
Recipients of the annual MLK Jr. Community Service Awards were recognized during the 41st MLK Jr. Commemoration event, held in person for the first time since January 2020