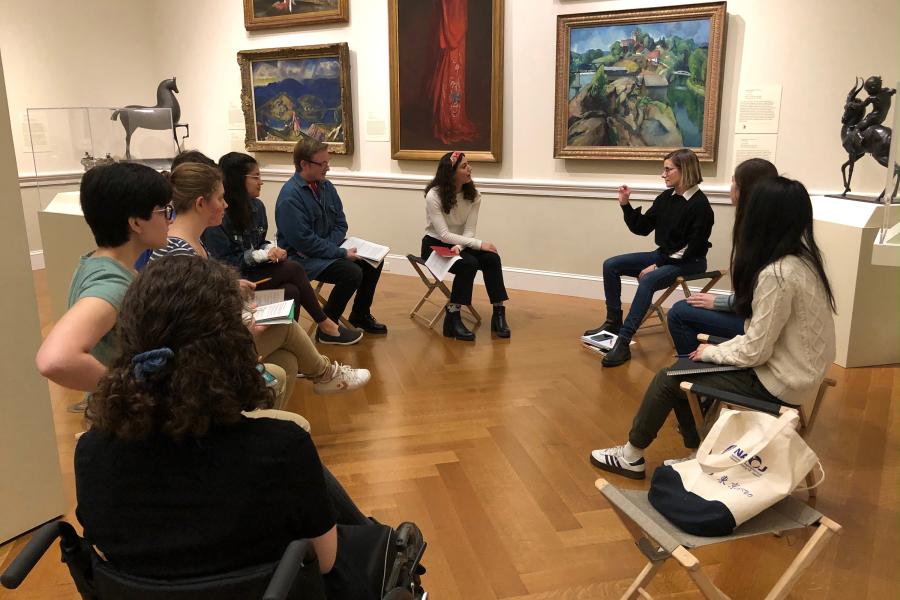 A modern approach to museum studies

When the Baltimore Museum of Art opened the new installation of its American Modernism collection in summer 2022, its two galleries carried echoes of a spring 2020 class jointly taught by the museum and Johns Hopkins University's Program in Museums and Society.

Students in the Krieger School class researched many of the objects in the collection, studied how museum visitors engaged with them, developed themes to group them, and drafted text for their descriptive labels.

"It was really cool to know that our research could impact what was hung up, where it was hung up, and what information would be on the label," remembered Ian May, who teaches art in Seattle and earned a bachelor's degree from the Krieger School in 2021 in art history with a minor in Museum Studies and Visual Arts.

"It was really cool to know that our research could impact what was hung up, where it was hung up, and what information would be on the label."
Ian May
Krieger School, Class of 2021

Co-taught by Museums and Society director Jennifer Kingsley and Virginia Anderson, curator of American Art and department head of American Painting and Sculpture and Decorative Arts at the BMA, Encountering American Art used the museum as a laboratory to investigate how to present American art created in the first half of the 20th century. Through a blend of research, reflection, conceptualization, and pure logistics, students experienced firsthand what goes into mounting an exhibit at the museum, which is right next door to the Homewood campus.

"This program really has lab culture," Anderson said. "The students are working with professionals in the field—we're all working side by side—they're doing research, they have these hands-on experiences, they're meeting with experts in conservation, education, and administration. They're getting that level of exposure and interaction in a way that is a fantastic learning experience and that makes the abstract notion of art history concrete and real."

The course dovetailed with a planned revamping of the two galleries as well as the museum's then-new mission, which emphasizes social engagement. With the previous exhibit still in place, one of the students' first tasks was to create a heat map showing how visitors walked through the space, where they stopped and didn't stop, and how long they spent with each object and in each gallery. They also interviewed visitors to learn what they were gleaning from the presentation.

Meanwhile, the students also read feminist theory, histories of modernism, and critical race theory, and talked about how to interpret works of art and their presentation through various frameworks.

"That was exciting because they simultaneously were getting an art historical framework, getting a theoretical toolkit, and working with concrete objects that would make that theory comprehensible," Anderson said.

Undeterred by the sudden shift to virtual learning during spring break that year, each student then took on two projects to research deeply. They applied the frameworks they were studying to their objects, identified themes across objects, and drafted content for the labels—capped at a mere 80 words—that would eventually hang on the gallery walls beside their objects. When writing the final label text two years later, Anderson said she drew heavily on the students' research and drafts.

"It's one thing to write an article or a class paper, but when you put students in this position that their academic work is going to have a public impact beyond them, it gets them to think closely and carefully not just about how you make sense of things, but also about the effects of this kind of work," Kingsley said.

Georgia LaMacchia, who earned a bachelor's degree from the Krieger School in 2021 and is now a graduate student of Egyptology in Yale's Department of Near Eastern Languages and Civilizations, used her interviews with museumgoers to narrow the focus of her label writing. One of the objects she researched was Robert Henri's "The Red Shawl," a large, full-length portrait. Visitors didn't ask much about the artist or the style, she remembered, but about the model. "People really want to know sometimes who these people are and what makes them interesting," said LaMacchia, who double majored in archaeology and near eastern studies and minored in museums and society at Hopkins.

She continues to hold that sensitivity to a museum's audience. "It's really important to understand that the museum is not necessarily for you as a museumgoer, or as someone who's installing it; it's for the public," she said. "It's a skill to understand what the public wants to see and how they look at things, and to see all these different views and questions about the art, and to put that into the information you're disseminating in the exhibit."

Ian May was initially excited to learn more about one of the paintings they were assigned—"Flaming American," by Marsden Hartley—because it seemed to be a powerful example of queer art. But the more they researched Hartley, the more they realized that he was indeed a gay man, but also that he sympathized with white supremacists and Nazis. In the end, May's research helped to shape the museum's decision to omit the painting from the exhibition.

Although abstraction is the style most typically associated with the collection's time period, the art is actually far more eclectic—something the students had to grapple with as they considered how to make an exhibition reflect its era. Pieces range from Native American baskets and ceramics to a Jackson Pollock (Pollock used Native sand paintings as inspiration); from a Brazilian bronze sculpture to a mid-century chair; from a Jacob Lawrence painting of chess players to a pewter chess set designed in the 1950s. The students engaged with these questions not only through the objects, as do scholars of earlier artistic periods, but through the artists' own exploration of the issues, the instructors said.

"The artists themselves were staking claims and making arguments about what American art was in the choices they were making at the same time the museum world—in terms of what it's choosing to collect in the '20s and '30s and '40s—is making arguments about what American art is and where it belongs," Kingsley said. "That added a layer of complexity that was also intellectually very rich and also very freeing for the students, because if the art itself is questioning what it is, then talking about identity and all these themes—which you sometimes might feel you're risking reading a contemporary moment back into the past—seemed very relevant."

One of the more unconventional objects that made the final cut is a light sconce by sculptor Isamu Noguchi. This is the first time the museum is displaying the sconce lit up, and the complex wiring it required was no simple process. But it is through logistical challenges such as these that students come perhaps the closest to visceral understanding of all the facets involved in presenting art.

"That's the thing about working with the BMA," Kingsley said, "that the students get exposed to all of these issues—what may feel or seem mundane, like how do you put small and big objects in a gallery together, do we light a lamp or not—but that have deep impact on visitor experience and meaning-making."

Tagged program in museums and society, baltimore museum of art 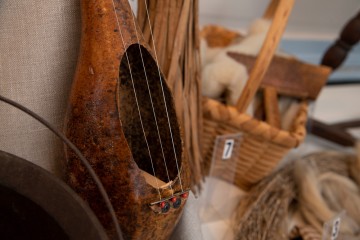