Chester is remembered for her positive attitude, reliability, and 'one-of-a-kind' nature

Geraldine "Gerri" Chester, who spent her entire 55-year career as a lab technician in the Department of Biology, died September 17, 2022. She was 83.

Chester arrived at Johns Hopkins in 1957, seeking a job at the Hopkins Club. Instead, she was directed to the late Philip Hartman, then a professor in the department, who hired her to wash glassware part-time. 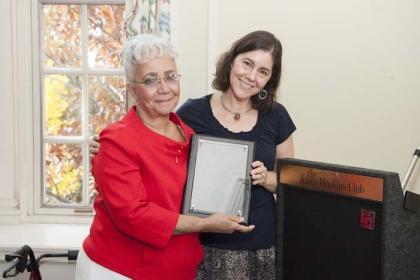 Under Hartman's training, Chester was soon responsible for all the tasks that keep a lab running, from preparing culture plates to hunting down information in journals. In turn, she trained everyone else who came through the lab, from new students to seasoned professionals.

"Gerri was a truly one-of-a-kind person," said Beverly Wendland, former professor of biology and James B. Knapp Dean of the Krieger School, and now provost and executive vice chancellor for academic affairs at Washington University in St. Louis. "Her reliability and high standards demonstrated that she understood the importance of her work to the research in the Department of Biology. I can't even begin to imagine how many lab techs she trained. And her bright smile and positive attitude were contagious."

"One of my favorite memories was the retirement party we threw for Gerri at the Hopkins Club," Wendland added. "So many people showed up and pitched in to give her a cruise vacation—so well-deserved."

Other department members agreed that Chester's efforts were crucial to their research. "Geraldine Chester was a member of my lab in biology from 1990 to 2014," said Richard McCarty, professor emeritus. "She was delightful in all respects. Her hard work, always done cheerfully, was a major contribution to the lab's research efforts."

"She was a wonderful person and made you feel like you were part of her family. Gerri was that quiet, hardworking person who never asked for anything but was grateful for everything she received."
Cindy Holstein
Administrator in the Department of Biology

Over the years, Chester witnessed changes in the sciences and on campus. She saw the advent of copy machines and plastic—as opposed to glass—petri dishes, and the opening of the Milton S. Eisenhower Library. And she watched the growth of diversity in a student body once dominated by white men.

"That is something I thought I could never live to see," she told the Krieger School's Arts & Sciences Magazine on the occasion of her retirement in 2012.

At her retirement, the department presented her with an engraved plaque. Its twin still hangs outside the lab in the Biology East building where she spent so many years.

"I met Gerri in 1977 when I started in biology," said Cindy Holstein, an administrator in the department. "She was a wonderful person and made you feel like you were part of her family. Gerri was that quiet, hardworking person who never asked for anything but was grateful for everything she received. I truly miss her."