The game is styled after Hasbro's 'Guess Who?' and features a virtual opponent who can carry on conversations

It's no mystery why online games became an even-more popular pastime during the COVID-19 pandemic: They provide entertainment and social connection, while also keeping our brains stimulated. A new AI-powered game developed by a team of Johns Hopkins undergraduates aims to bring those positive benefits to older adults in retirement communities.

The online game is styled after the classic Hasbro board game "Guess Who?" and is specially designed to provide fun and engagement for older users who live alone. The team will be presenting their prototype at the Whiting School of Engineering's Design Day on May 3.

The students are tackling the project as part of the Computer Science Innovation and Entrepreneurship course, offered as a collaboration between the Whiting School of Engineering's Center for Leadership Education and Department of Computer Science. The two-semester course challenges students to work through every step of the entrepreneurship process, from technology design to creating a business plan and pitching the product to potential investors.

The team of computer science majors—Rebecca Muratore, Rena Liu, Nicholas Bowen, and Marcelo Morales—wanted to create a technology product that would support older adults experiencing loneliness and social isolation. They decided to create an interactive online game, which they thought would be more enjoyable and intellectually stimulating than just chatting with a virtual assistant like Siri or Alexa. 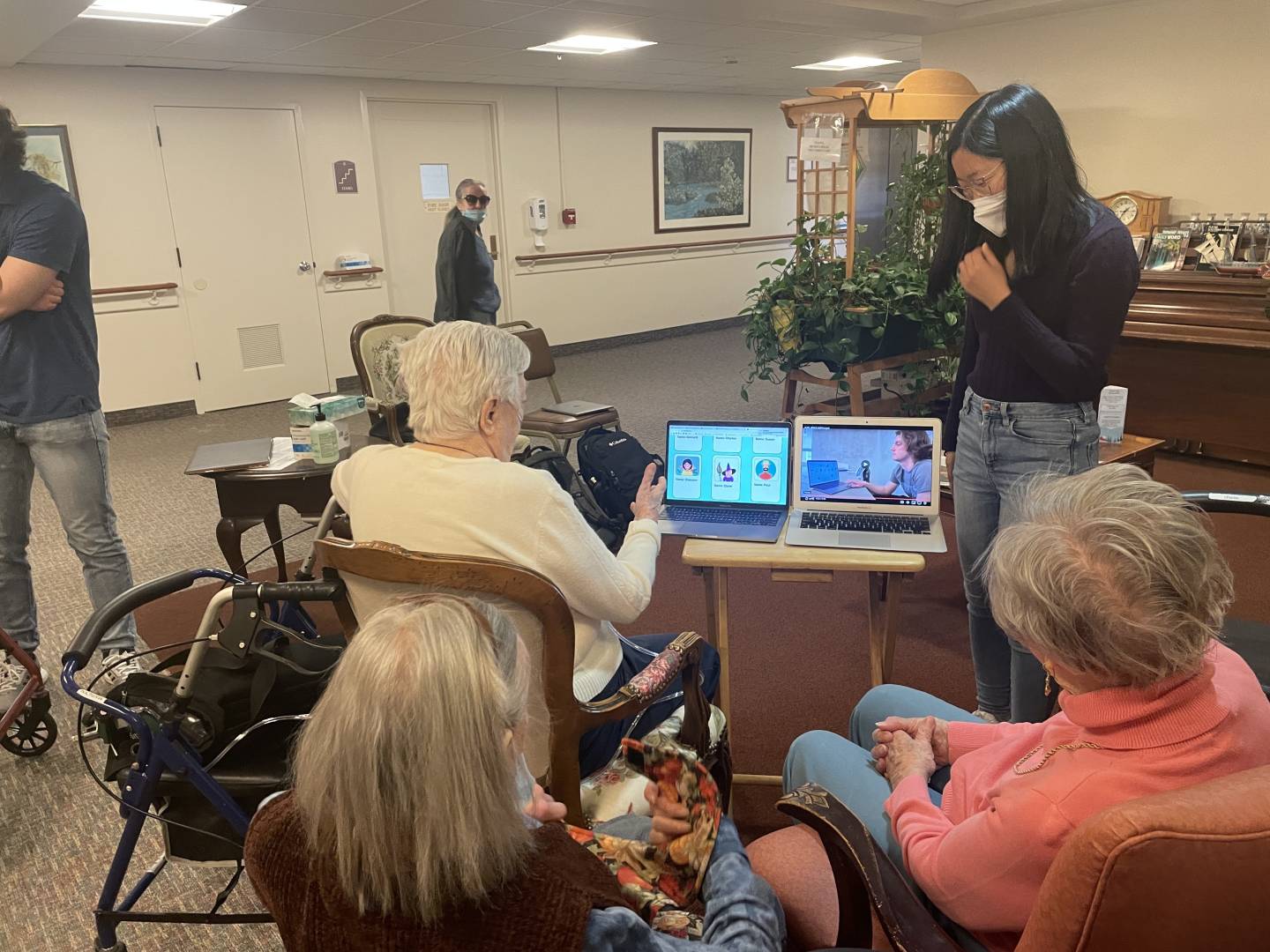 Image caption: The team visited a local retirement community to test a prototype of their game.

"We really liked the idea of creating a game that also has a voice interaction aspect to it, so users can have real conversations through the game. Not only does it keep older adults mentally active but it provides some companionship, too," Muratore said.

In "Guess Who?" the goal of a player is to identify which character their opponent selected as quickly as possible. In the team's digital iteration, the human player can have a seemingly authentic conversation with their AI-opponent as they ask questions such as "Is this person wearing glasses?"

The biggest technical feat for the student team was training the natural language processing model so the game would generate human-like responses.

"Plenty of games exist online already where you can play against the computer, like chess and Scrabble. And Siri and Alexa already allow you to have conversations. But there aren't many examples of those two technologies integrating, which is what we wanted to accomplish for our game," Liu said.

The team visited a local retirement community to run a small user study and gather feedback on their prototype. The reactions from real users helped the team optimize their design for their target audience, said Bowen. After user-testing, they realized they needed to improve visual elements of the game for the older users, like making the cards easier to read with better color contrast and larger text.

And what the team also found is that from children to older adults, everyone loves a good board game.

"We got to learn about the entrepreneurship process and bring new technology to what has been an underserved market," Bowen said. "The best part about working on this project was seeing how much the residents enjoyed the game and wanted to play it."

The students are confident the entrepreneurial, problem-solving, and teamwork skills they learned from the course will translate well in their future pursuits.

"As someone who wants to be a software engineer, building out a product for a whole year and then testing the product with the target market was cool to encounter so early in my career," Morales said.