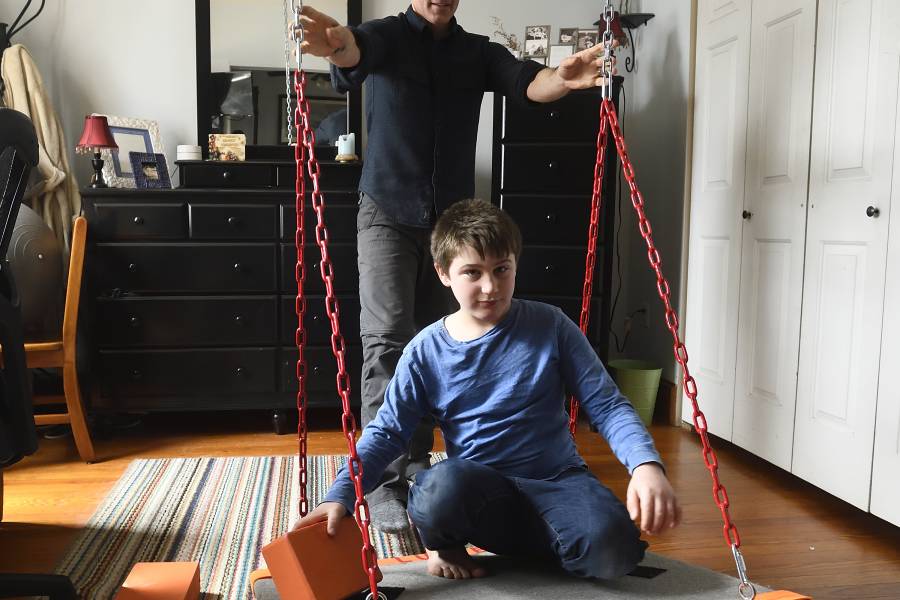 Johns Hopkins students design a platform swing that supports the posture and muscle growth of a child with a genetic condition that produces developmental, speech, and attention issues

Luke has a genetic condition that produces developmental, speech, and attention issues and a craving for sensory stimulation. The latter means he likes to smell different things, feel textures hands-on, and take things apart. He also enjoys movement. "Swinging soothes him," Noppenberger says. "It gives him some motion if he can't get outside. It calms him down."

But regular playground-type swings don't work well for Luke. They have less flexibility and space to stand, sit, and lie prone, so students participating in the Johns Hopkins University chapter of Volunteers for Medical Engineering designed a platform swing that would work in the office family room of the Noppenbergers' townhouse. The problem? It only took Luke about 30 seconds to dismantle the special foam cushioning attached to the seat of the platform.

Until he got his hands on it, the swing had Velcro and glue attaching padding that would encourage him to sit cross-legged rather than sitting on his knees with his legs splayed out under him, resembling the letter "W." He likes that position but, over time, sitting that way can weaken his hips and trunk. Luke's school occupational and physical therapists recommended the specially modified swing to help improve his trunk support, balance, and low muscle tone. 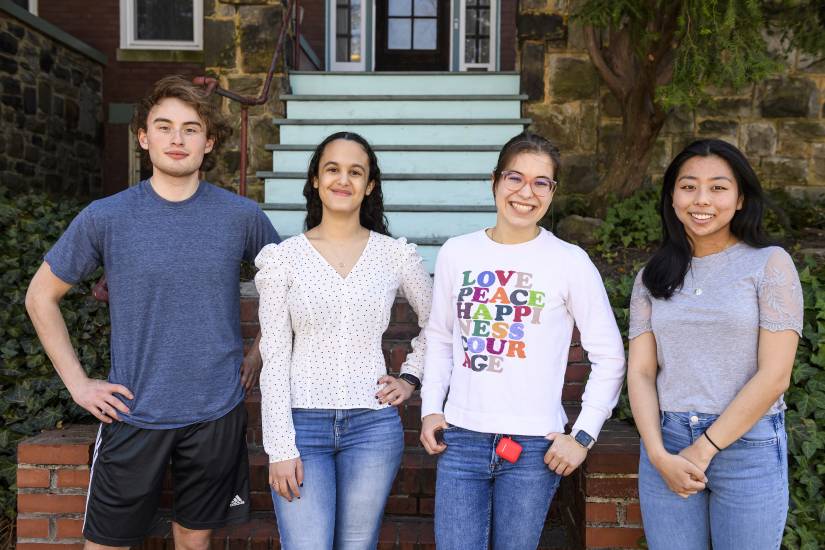 The project was a good fit for the VME team—all students from the Whiting School of Engineering—who craft engineering solutions for Marylanders with disabilities to help them live life more fully and independently. The VME program began 40 years ago at Northrop Grumman, then called Westinghouse, and is one of the services offered by the Image Center of Maryland, which seeks to find innovative solutions to challenges faced by those with disabilities.

"As engineers, we are problem solvers," says Niel Leon, senior staff engineer for the Whiting School of Engineering and the laser safety advocate for the Homewood campus. "In both these roles, I assist students and researchers in developing the unique designs to meet their experimental and design objectives," he says.

"When you get these projects done, you see this kid light up like they've never lit up before. You go beyond making the kid's day—basically, you've made this kid's life."
Niel Leon
Senior staff engineer, Whiting School of Engineering

But the young engineers didn't count on Luke's tendency to disassemble things. "We created Velcro blocks, but we underestimated his knack for taking things apart," says Diana Bershadsky, coordinator of the project and a senior majoring in mechanical engineering. "Super Glue cannot withstand him. He just took the Velcro right off."

The group now must figure out a way to restore the blocks so Luke can't undo them. "We're thinking of replacing them with blocks made of a different material—not foam this time—that we can screw into the bottom of the swing, and tighten them that way," Bershadsky says. "He would need to reach underneath the swing to unscrew the blocks, which is less likely for him than what he was able to do before."

Luke's father, a mechanical engineer who performed the final installation of the swing but whose time constraints made it difficult for him to construct the swing himself, and his mother, a mental health therapist, first heard about the VME program about three years ago after their daughter, now 15, outgrew her "kiddie" bike. She has the same genetic condition as Luke, but has problems with balance, strength, and endurance, and so needed specialized training wheels.

"I'd heard about their adaptive bicycle program and wanted to get her on a bigger bike," Noppenberger says. "I contacted them, and they set us up with a bike—an adult size bike with outrigger wheels, kind of like a trike. She can't walk too long a distance, so this bike allows her to go further."

Leon says the VME volunteers regularly modify bicycles for children who have trouble balancing, such as those who are blind or have cerebral palsy. These are done either by individual student groups or part of scheduled bike workshops, which are held several times a year.

"They are great for kids who haven't developed balancing skills," he says. "Riding a bicycle requires a delicate set of balancing skills. We can put together a bicycle with support wheels for less than $500, which includes the bicycle. If you went out and got a professional one, the kind used in rehab, they start at $3,000." Most of the cost is covered by VME or the sponsoring student group, although families often contribute for more extensive projects, he says.

One of the JHU's team's first projects was a collapsible stroller with a small foot "prop" for a young boy with cerebral palsy. Another was a smaller-than-typical "bouncy" chair walker for a little girl who was exceptionally small, about half the size of the standard chair. "We took the seat from another type of chair, then built an entirely new frame," Leon recalls.

Both sides find it gratifying.

"I think it's great," Noppenberger says. "Students don't always get a lot of real-world work experience, and the added bonus is that they get to help kids like Luke, who have these unique needs."

Bershadsky agrees. "There are a lot of clubs at Hopkins, but this feels more fulfilling because it helps somebody else," she says. "It has a greater purpose."

Leon adds: "One of my goals is to make a generation of scientist engineers better than my generation. That's why I do this. When you get these projects done, you see this kid light up like they've never lit up before. You go beyond making the kid's day—basically, you've made this kid's life."